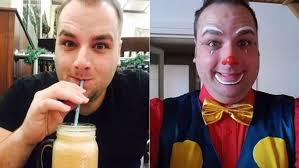 The “best clown” in the Netherlands, Belgium and Luxembourg and considered one of the leading children’s entertainers got into a sticky situation that is far from funny as he livestreamed on Facebook his rooftop stand-off with armed police. He was later arrested for allegations that he murdered his former girlfriend.

31-year-old Kevin Lapeire waved a pistol and threw a gas canister at police before turning himself to the officers and surrendering. He is being accused of killing his former girlfriend, identified only in the local media as 47-year-old Caroline D.

Lapeire allegedly visited Carolyn D. on Sunday night, Mother’s Day in Belgium, at her family home in Oudenburg, a town located between Ostend and Bruges. The clown is being accused of tying up and gagging Caroline D’s children ages 12, 15 , and 17, leaving them in the attic before killing their mother in the garage with a knife.

The children’s school was initially clueless that a crime happened that fateful night as Lapeire even called the school on Monday morning to inform officials that Caroline D’s children will come in late. He also managed to send a text advisory to his former partner’s employer.

On Monday afternoon, things changed and Lapeire was seen on top of a 13-storey apartment building in Bredene waving a pistol. The complex was near his parents’ home.

He broadcast himself on Facebook Live to capture him throwing a gas canister from the roof, before starting to fire into the sky.

It would take Lapeire 4 hours to finally surrendering to police snipers in a dramatic fashion as he first threw down his coat, pulled his sweater over his head and placing his hands in the air.

There is no clear motive. What is known with certainty only is that the clown separated from his partner days ago before the gruesome murder. It is also not clear if Lapeire despite being in the business of making people laugh has some mental issues he’s struggling with.

Lapiere gained prominence when he appeared on Belgium’s Got Talent and after he won an award for the “best clown” in Belgium, Netherlands and Luxembourg. He also used to entertain children in hospitals under the pseudonym Doctor Aspirin. He also managed the careers of 15 other entertainers.