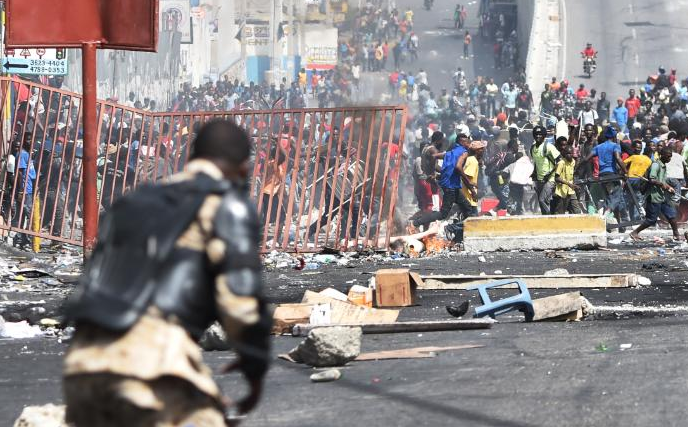 The island of Haiti saw the third day of violence and looting which erupted on Friday evening (see our related coverage) over the government’s decision to hike fuel prices in order to comply with an IMF agreement over a loan it badly needs.

The burning of hotels in the capital combined with the US State Department’s advice to stay indoors means that a youth group from Bradenton, Florida, who were normally scheduled to return from a missionary trip, are now stranded.

Pastor Dewayne McFarlin said that the group from Bradenton's Woodland Community Church, which includes middle school- and high school-age children, was stopped on way to the airport as they encountered several individuals demanding them pay for access to the roadway.

Ms. Jill Kramer, the parent of one of the teens stuck in Haiti, explained: "They were on a bus with the owners of the mission, the leaders, our adults, three armed guards. And they just kept getting stopped by roadblocks and people asking for money. And that's when they decided that, at that point, it was just … it wasn't worth it, to try to make it to the airport."

The US Embassy in Port-au-Prince, aware that several countrymen were stuck, updated it’s warning, claiming that: “The airport has limited food and water available.”

“Telecommunications services, including Internet and phone lines, have been affected throughout Haiti. It may be difficult to reach people through normal communication methods.”

But…how could this be? Didn't noted foreign policy expert Conan O'Brien assure us that Haiti was just fine after spending a couple of days at an exclusive, heavily-guarded private resort?

That’s why you don't vacation in shitholes

these are pos missionaries. they deserve death by machete for being fools trying to help savages…. let the monkeys burn down their shithole and stop all aid. let them them DIE then hire trump to go down there and turn this shithole into a vacation paradise.

Kid-Dad, can you sign this permission slip so our class can go to beautiful Haiti?

Father-Not a chance in hell your going to Haiti! How about we take a trip to Yellowstone or a Great America theme park. If you really want to go through the motions of trying to help a group we can go to Commiefornicia and help the 1000's of homeless. But there is a zero chance you will be going to a 3rd world shithole in turmoil while I'm your dad and your under 18.

And the above only works if the dad hasn't sipped or guzzled the koolaid. This should be looked upon as child abuse! Dragging a child into a shithole just to virtue signal your beliefs is a terrible form of abuse.

The ignorant and unfeeling remarks coming against these young people are the voice of the very real devil controlling their hearts and minds. Pathetic people who should be banned from your news boards for their hatred.

The issue with missionaries is they project their values onto organisms that do not share them. Their humility is perceived as weakness instead of reservation because those organisms have no discipline or self-control rendering reservations a completely alien concept. If missionaries TRULY empathized with those organisms they'd understand this disconnect. Unfortunately, they choose to leave fate in God's hands while actively sticking their hands in the problems believing their hands are directed by God. Ironic that their lack of humility in one regard d*mns them for their excessive humility in another.

Maybe the Clinton's will part with some of that Earthquake $$$$$ they seem to have forgotten to hand out down there.

Or maybe they'll start up a whole new scam?

Quick! we need another fundraiser for the Clinton Foundation!