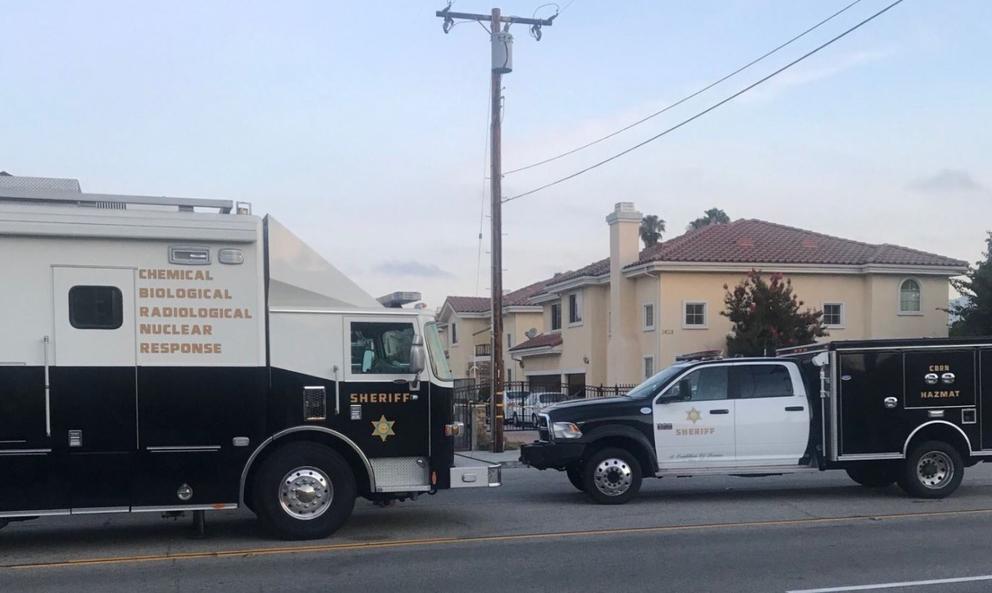 A common method of assault in Europe and the Middle East is making its way to the U.S., leaving a woman in critical condition after having acid poured on her face. At around 1:00 a.m. Saturday morning, El Monte police responded to a 911 call of a woman screaming near the 3600 block of Durfee Avenue.

When police arrived, they found a woman lying in the driveway with severe burns on her face from a chemical attack. The woman was rushed to Los Angeles County+USC Medical Center and is listed in critical condition although her name has not been released. According to an El Monte police spokesman, the suspect had poured an "unknown type of caustic chemical" on the woman and then fled in a vehicle.

Investigators are working to find a motive for the cowardly attack and identify any suspects in the attack. The L.A. County Sheriff’s Department Special Enforcement Bureau hazmat team is also assisting the investigation.

Acid attacks have been on the rise in recent years with the UK having the highest rate of acid attacks in the world at around two a day. Acid can be purchased for only a few dollars at any convenience store in the UK, but legislators are working to make the chemical more difficult to obtain. Victims who survive caustic chemical attacks require extensive medical surgeries such as the 17-year-old girl in this photo who traveled to Los Angeles from Syria for reconstructive surgery.

Only the most cowardly, despicable kind of human being would throw acid on a young girl. Anyone capable of that should be shot on the spot

Get these F- Islamist acid throwers out of our country. They are despicable and are looking for a revolution. They aren't human beings but animals without souls.

I’m sick of this crap. These sick fucks need to be arrested, tried and hung by the sheriff in the town square.

i've been warning for years that acid attacks are coming to the USA. …. the old neighborhood where i grew up is now all Muslim. KICK THE GLOBALIST DEMOCRATS AND NECON FILTH LIKE MCCAIN AND GRAHAM OUT OF OFFICE.

had Germany won WWII there'd be none of this crap.

Muslim=something lower than rabid animal. RID HUMANITY OF THEM

I wonder about the Germany comment. Maybe the old Germany.

Yet another blight to thank Islamists for popularizing. Why do leftists love them? What's to like?

Merkel has already done more damage than Hitler, who only killed millions. Merkel has wiped out an entire culture, even more if you count the other EU nations affected. .

This is a very common attack on a woman by Muslims in the NA-ME areas. Sometimes it's honor for the family, sometimes it is perceived adultery, or just a girl who looked at a man that caused offense by another Muslim male - a real hooligan and thug.

This is what we are importing to the EU and America. China and Russia are laughing their asses off at us for being SO STUPID. Time to deport all Muslims out of the West

This is what we are importing to the EU and America. China and Russia are laughing their asses off at us for being SO STUPID. Time to deport all Muslims out of the West

No names, nationalities, or reasons given. Why not? Are random women being targeted or just those from a certain heritage?

"… working to find a motive…" = We have no intention of speaking the truth about Islam.

The coming elections mean as much or more than electing Trump. We have to get rid of the Globalists, RINOS and NeoCons. We also have to root out the deep state azzes sabotaging us and reign in Google Apple MicroSoft cabals and the media.

Anyone caught doing something like this should be shot on site, they have given up their right to live and actually should have the same thing done to them! Eye for a eye!

At long last the green bay packers have a shot today. Just hope they make a good game.
[url=https://www.cabinetcrc.net/puma/]nike puma on sale[/url]