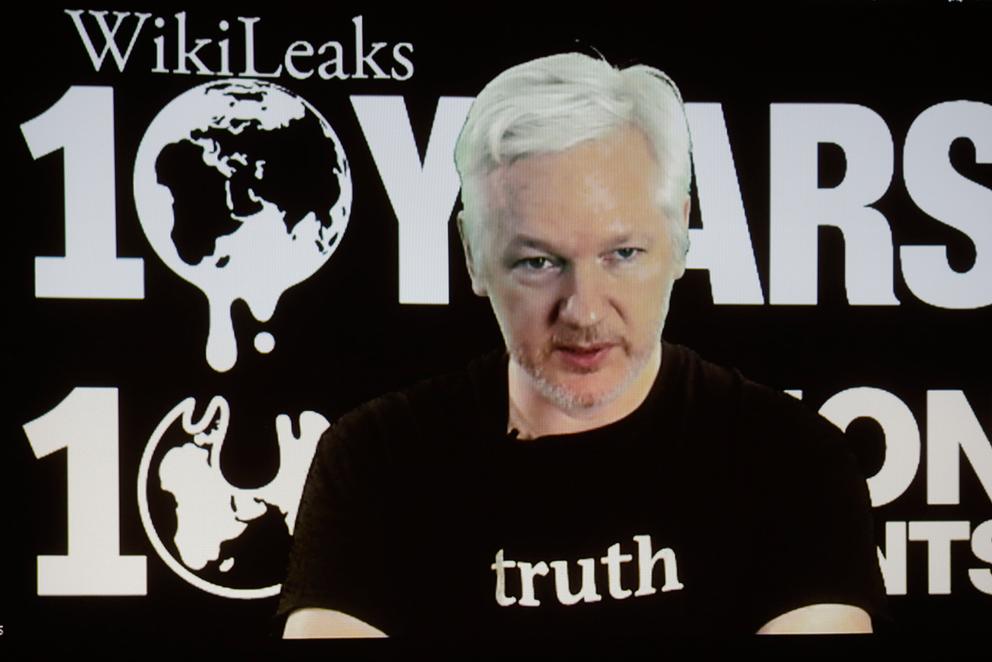 DNC Election Meddling Blamed On Russia And WikiLeaks In Lawsuit

A new filing in the Democratic National Committee v. Russian Federation, WikiLeaks, et al. was released Thursday. As per the hearing yesterday, parties are asked to file a proposed scheduling order by September 28, 2018, and the plaintiff (DNC) is expected to file an Amended Complaint by October 12, 2018.

Part of the reason that WikiLeaks may be being blamed for the lost election is due to the fact that WikiLeaks documents actually showed that it was the DNC that was meddling with the democratic process.

Leaked emails published by WikiLeaks revealed DNC colluded with the Clinton campaign to hurt Bernie Sanders' chance in the election. Surely we all remember how DNC Chair Debbie Wasserman Schultz didn't allow the Sanders campaign access to voter database information. When this was revealed she jumped ship and finally worked officially for the Clinton campaign after having worked for her unofficially.

Then there's the fact that Donna Brazile, interim DNC chair, admitted that the DNC offered more control over decision making in exchange for financial support (the same kind of "pay to play" attitude that got Qatar off the terrorist watch list under Madame Clinton's tenure as Secretary of State). Debbie, of course, would be hit with a class action lawsuit alleging she had helped Hillary to rig the primary.

The class action suit, <a href="https://www.inquisitr.com/3342097/debbie-wasserman-schultz-wikileaks-class-action-lawsuit-democratic-national-convention/">initially filed by over 100 Bernie Sanders supporters</a>, alleging six separate claims related to fraud, misrepresentation and negligence claiming the game had been rigged in favor of Clinton from the very start.

The Observer reported how Guccifer 2.0 leaks revealed how the DNC rigged primaries for Clinton. Politico pointed out how the <a href="https://www.politico.com/story/2016/04/clinton-fundraising-leaves-little-for-state-parties-222670">essentially acting as money laundering conduits f">DNC's joint fundraising committee was "essentially acting as money laundering conduits"</a> for the Clinton campaign. Speaking of Politico, Kenneth Vogel, a reporter at Politico was revealed to <a href="https://wikileaks.org/dnc-emails/emailid/10808">have a special "agreement"</a> with the Clinton campaign.

Vogel was by far not the only media personnel in bed with the Clinton Campaign and DNC (if you could actually consider them separate entities at that point). CNN, like Vogel, sent stories ahead to be approved by the DNC before publication. CNN's anti-Sanders Op-Ed from May 2016 was also pre-approved by the DNC before it was published. A lot of this information only saw the light of day due to WikiLeaks.

The Intercept also reported on an email chain that showed an anti-Sanders Op-Ed had been ghostwritten by a lobbyist under the name of Atlanta Mayor Kasim Reed, received from a Clinton SuperPAC. DNC emails disclose a cosy relationship with Jake Tapper as well asking "if we want to offer Jake Tapper questions to ask us." Tapper insists there was nothing untoward related to this, but DNC Hispanic Media Director Pablo Manriquez would eventually resign due to DNC staff urging him to abandon impartiality and propriety.

Wikileaks also <a href="https://observer.com/2016/08/wikileaks-reveals-mainstream-medias-coziness-with-clinton/">revealed that the Washington Post hosted a fundraiser with the Clinton campaign</a>. They were unlisted, of course, according to leaked emails because "the lawyers told us we cannot do it." WaPo would later gloss over Wasserman-Schultz and the DNC's dirty deeds claiming nothing they did constitutes "rigging" the primary. Meanwhile, uncovering all this dirt which, WaPo should recall, used to be the prime duty of the fourth estate, apparently constitutes meddling.

The Intercept reported in May 2016 that they obtained emails showing CNN published an anti-Sanders Op-Ed ghostwritten by a lobbyist under Atlanta Mayor Kasim Reed’s name that they had received from a Clinton SuperPAC. More leaked emails showed that MSNBC president Phil Griffin was emailed in response to Mika Brzezinski calling out Wasserman-Schultz and asking for her to resign amid the primary scandal. “This is the LAST straw. Please call Phil Griffin. This is outrageous. She needs to apologize,” Wasserman-Schultz implored.

According to Brazile, the fundraising agreement between the DNC and the Clinton campaign:

“specified that in exchange for raising money and investing in the DNC, Hillary would control the party’s finances, strategy, and all the money raised. Her campaign had the right of refusal of who would be the party communications director, and it would make final decisions on all the other staff. The DNC also was required to consult with the campaign about all other staffing, budgeting, data, analytics, and mailings.”

The use of superdelegates to drown out organic support from Democrats for Bernie Sanders was another example of how the DNC did everything in their power to ensure Hillary, not Bernie, won the primary is ignored by so many screeching heads bemoaning "what Russia did to our democracy."

Meanwhile, just under two months ago, arch-progressive <a href="https://www.independent.co.uk/news/world/americas/us-politics/israel-us-elections-intervention-russia-noam-chomsky-donald-trump-a8470481.html">Noam Chomsky admitted that the idea that Russia had any effect is "almost a joke," especially when compared to the exorbitant control the Israeli lobby had and has had on this and previous presidential elections. Israeli intervention "vastly overwhelms" anything Russia may have done.

Then there's the question of what exactly WikiLeaks did to "undermine democracy." Let's say you're running for cookie jar protection committee but I catch you stealing cookies on camera and then share the evidence. If you lose the election due to the fact that it's been shown you cheated and stole, should I be censured or applauded? In my opinion, the "kill the messenger" attitude being used to scapegoat Julian Assange, WikiLeaks and Russia and the actual collusion between Clinton and the DNC, collusion between the Clinton campaign and the media, is far more insidious than sharing accurate information about world leaders with their crumby hands covered in cookie dust.

OH HELL TO THE NO!!! NO NO NO!!!! FIRST OF ALL, YOU DONT GET TO POINT YOUR FINGER AT THE PERSON WHO EXPOSED YOUR EVIL DEEDS AND CALL IT A CRIME! WHERE THE HELL DO YOU LIBTARDS GET YOUR FREAKIN REASONING FROM? YA ALL BETTER START LOOKING IN THE MIRROR AND REALIZE EVERYTHING COMING ON YOU NOW… MENTALLY, EMOTIONALLY, PHYSICALLY, LEGALLY, AND SPIRITUALLY, IS YOUR OWN DOING… OR BETTER YET, YOUR UNDOING! JUSTICE IS COMING!!! IT HAS YOUR NAME ON IT! AND THERE IS NO ONE TO BLAME BUT YOURSELVES! YOU, YOU! YOU! YOU! YOU DID IT. LIARS AND CHEATERS YOU ARE! AND GOD KNOWS WHAT ELSE!

Ye are of [your] father the devil, and the lusts of your father ye will do. He was a murderer from the beginning, and abode not in the truth, because there is no truth in him. When he speaketh a lie, he speaketh of his own: for he is a liar, and the father of it./ But the fearful, and unbelieving, and the abominable, and murderers, and whoremongers, and sorcerers, and idolaters, and all liars, shall have their part in the lake which burneth with fire and brimstone: which is the second death./ Thou shalt not bear false witness against thy neighbour./

12And, behold, I come quickly; and my reward is with me, to give every man according as his work shall be. 13I am Alpha and Omega, the beginning and the end, the first and the last. 14Blessed are they that do his commandments, that they may have right to the tree of life, and may enter in through the gates into the city. 15For without are dogs, and sorcerers, and whoremongers, and murderers, and idolaters, and whosoever loveth and maketh a lie. 16I Jesus have sent mine angel to testify unto you these things in the churches. I am the root and the offspring of David, and the bright and morning star. 17And the Spirit and the bride say, Come. And let him that heareth say, Come. And let him that is athirst come. And whosoever will, let him take the water of life freely. 18For I testify unto every man that heareth the words of the prophecy of this book, If any man shall add unto these things, God shall add unto him the plagues that are written in this book: /// 6If we say that we have fellowship with him, and walk in darkness, we lie, and do not the truth: 7But if we walk in the light, as he is in the light, we have fellowship one with another, and the blood of Jesus Christ his Son cleanseth us from all sin. 8If we say that we have no sin, we deceive ourselves, and the truth is not in us. 9If we confess our sins, he is faithful and just to forgive us our sins, and to cleanse us from all unrighteousness. 10If we say that we have not sinned, we make him a liar, and his word is not in us.

AND SECOND OF ALL YOU KNOW VERY WELL RUSSIA DIDNT DO SQUAT!!! YOU KNOW VAULT 7 REVEALED THE PROGRAMMING THAT LETS YOU PUT WHOEVER'S DATAPRINTS YOU WANT TO LAY BLAME ON, TO MAKE THEM LOOK GUILTY WHEN YOU DID IT YOURSELF. FRAMING A DULY ELECTED PRESIDENT IS A CRIME. AND YOU HAVE BEEN CAUGHT. CONFESSION IS GOOD FOR THE SOUL. SELAH!