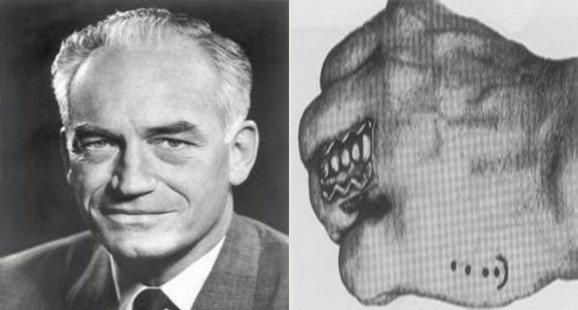 Barry Goldwater And The Story Of The Secret Tattoo

I first learned about Barry Goldwater in my early teens. This was right about the beginning of my anti-establishment and bohemian phase. It would surprise some to think that a rebellious teenager might look to a conservative icon for inspiration, but Goldwater was certainly a rebel's rebel.

It was through Goldwater I first learned about the Rockefeller infested Trilateral Commission and the Council on Foreign Relations (CFR). Goldwater, who ran for President against LBJ, was an early crusader against the growing danger of elitist globalists: "The Trilateral Commission is international….(and)…is intended to be the vehicle for multinational consolidation of the commercial and banking interests by seizing control of the political government of the United States. The Trilateral Commission represents a skillful, coordinated effort to seize control and consolidate the four centers of power." Senator Barry Goldwater of Arizona is, of course, also the namesake of this news organization. Recently I learned something new and somewhat surprising about Senator Goldwater.

A tattoo artist friend of mine, Murray Sell, mentioned this weekend that Goldwater had a tattoo:

"There’s a secret Barry Goldwater tattoo that young conservatives working for the gov in DC get to pay homage. There are a bunch of congressmen who have it. You should look into it. Fun fact, I was best pals in my 20’s with the son of the guy who wrote his biography. Good family. Good people. Helped me a ton when I was growing up."

This intrigued me. Upon further investigation I learned that <a href="https://tomtribby.wordpress.com/2012/02/06/the-smoki-people/">Goldwater was tattooed in the tradition of "The Smoki people"</a> (pronounced "smoke eye"). The Smoki date all the way back to 1921 in Prescott, Arizona. The Smoki People were a faux indigenous tribe who performed at the Prescott Frontier Days Rodeo's "Way out West Show." Sharlott Hall, a historian from the region, even wrote a short book The Story of the Smoki People, a fictional history of the fictitious tribe.

The Smoki People were a social organization not unlike the Elk or Moose lodge. President Calvin Coolidge was an honorary member of the "tribe" as well. Coolidge, by the way, signed the Indian Citizenship Act which granted US citizenship to American Indians in 1924. Barry Goldwater was often an announcer at the Smoki People shows. Smoki members were marked by a small tattoo on the left hand that included three dots between the index finger and thumb. Goldwater's involvement with the Smoki owed much to his interest in the preservation of Native American and Southwestern US culture and art.

The Smoki finally died out in the early 1990's in part due to difficulty drawing new members but also due to complaints from the Hopi people who objected to the "sham ritual" which they felt was sheerly for entertainment rather than for spiritual or religious reasons. Barry Goldwater, known as "Mr. Conservative" emphasized the importance of small government and fiscal conservatism but was also an advocate for Native Americans and Native American culture.

For many people today, the term "conservative" evokes an image of clean-cut which isn't exactly compatible with body art such as tattoos. Goldwater, however, was a true conservative but not as interested in the social side of things. He even feared the "new right" was selling itself out to the "religious right" which would be exemplified in Jerry Falwell's "Moral Majority." If anything, Goldwater was a complex, even misunderstood figure.

You're kidding me, right? You've got to be joking. Are you telling me that Philip misspelled Barry Goldwater's name? He seems to be trying to praise Goldwater in this article, so it's kind of ironic Philip would spell goldwater's first name 'Berry'. It seems like if he was such a big fan of Goldwater, he would know how to spell the guy's first name. This is classic! I can't believe there are illiterate journalists out there these days.

That's not even the correct photograph of Barry Goldwater's tattoo. Here's the actual secret tattoo Goldwater had on his left hand.