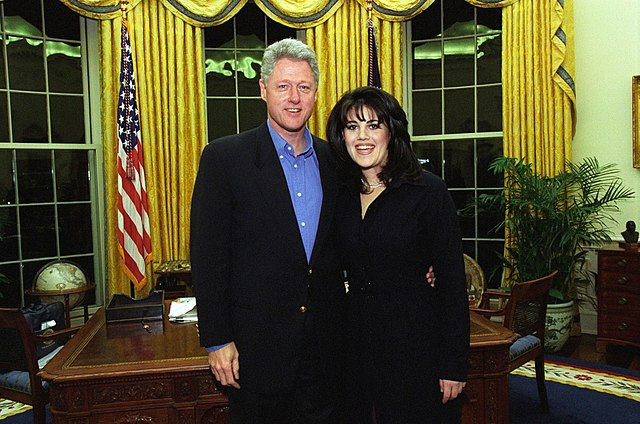 The American Crime Story series just had its 3rd season complete. Following an excellent adaptation of serial killer Andrew Cunanan's assassination of famed fashion designer Gianni Versace. The second season dealt with the O.J. Simpson "trial of the century" based in large part on the book by Andrew Toobin, famed for his legal reporting and for wanking in front of the staff of CNN in a Zoom meeting among a few other questionable behaviors. The most recent series of American Crime Story, American Crime Story: Impeachment, deals with the impeachment trial of Bill Clinton.

As far as the impeachment proceedings involving Clinton go, one thing I've always found upsetting is how the whole thing was framed as the issue being the infidelity and a president getting oral sex from an intern in the Oval Office. Now surely this is far from what one might call "presidential behavior" but the Whitewater scam and other matters that the Kenneth Starr investigation were initially looking into before they became sidetracked by sex is far more intriguing to me.

The latest season is interesting nonetheless. I find it does a great job of humanizing Monica Lewinsky, bringing home what she went through after being groomed, used and discarded by not just her employer but the leader of the free world. As bad as all that is, however, I feel the crimes of the Clintons such as illegally accepting money from Chinese Communists, even renting out rooms in the White House in order to drum up campaign funds, the destruction of files following Vince Foster's death and so much more. Alas, the salacious angle of the sexual relationship (relationships rather) of Bill Clinton took precedence.

Even focusing on the sex side of things, as distasteful as disrespecting the office of the president and the Oval Office itself is, it's the abuse of power and attempt to buy off Lewinsky's silence that are far worse. His long history of sexual harassment and alleged rape are also far worse, but once again, the Monica story was so compelling it sucked up the airtime. Most people then, many now, believe Bill Clinton was being impeached for a blow job rather than for miscellaneous crimes such as perjury. The media's focus on the sex however obscured much worse issues.

Another interesting thing about the series is seeing the rise of Ann Coulter and Matt Drudge, central parts of what Hillary called "the vast right wing conspiracy." A point where it fails is trying to inspire sympathy for Hillary and portray Bill as a truly loving husband who just had a moment of weakness. Moment of weakness? He had decades of weakness in which he is accused of not only abusing his power to procure women and young girls, but even force himself onto women.

The insistence of Kenneth Starr's team, Coulter, Drudge and others in focusing on the seamier side of things rather than the more serious abuses of power, manipulation, exploitation and serious financial, fraud and sex based crimes likely is responsible not only for the failure of the impeachment proceedings but Clinton's popularity as he was seen as a martyr "just for having sex." (Oh, excuse me, he did not have sexual relations with that woman, depending on what the definition of "is" is anyway).

There are a few brief mentions to Vince Foster and the conspiracies surrounding his mysterious death (ruled a suicide, though not everyone involved with the Clintons believed that official story) and what happened to certain files and folders he was privy to that may have implicated Hillary and Bill Clinton in various financial crimes and exploitation via fraud. That and Foster's connection to Linda Tripp are also fairly interesting parts of the plot.

Like the former two seasons, there are a few minor liberties taken. Paula Jones was unhappy with the way she was portrayed as a rube and a few tasteless jabs at her expense with no basis in reality contributed to this characterization. Of the three seasons, I found this the most disappointing. Still worth a watch if you're interested in the background of that section of history, but don't expect documentary style veracity.
Share this article