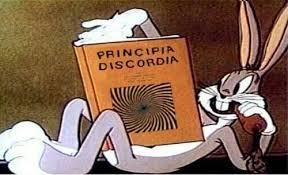 Cult Of Kek: Who Are The Discordians?

It's May 23, an especially Discordian day, so what better time to begin digging away at the fascinating lore of Discordianism and how it may have helped lead to the modern day cult of Kek. What does meme magic and shitposting have to do with some hippie joke cult from the 60's though you might ask? Quite a bit in actuality. Discordianism got its start in the late 1950's and started as a pet project of Kerry Thornley, who was associated with The Merry Pranksters and an old army buddy of Lee Harvey Oswald. Many Discordians were growing suspicious of the rise of liberalism, and many moved more towards Libertarianism as a result.

Though May 23 is not technically a Discordian "holy day" according to the Principia Discordia (their zen prankster handbook/volume of sacred law), it is sometimes referred to as "Jake Day" in the Discordian calendar. Discordians hold the numbers 5 and 23 to be of great importance.

From the Principia Discordia itself:

<blockquote>POEE subscribes to the Law of Fives of Omar's sect. And POEE also recognizes the holy 23 (2+3=5) that is incorporated by Episkopos Dr. Mordecai Malignatus, KNS, into his Discordian sect, The Ancient Illuminated Seers of Bavaria.

The Law of Fives states simply that: ALL THINGS HAPPEN IN FIVES, OR ARE DIVISIBLE BY OR ARE MULTIPLES OF FIVE, OR ARE SOMEHOW DIRECTLY OR INDIRECTLY APPROPRIATE TO 5.

The Law of Fives is never wrong.</blockquote>

Discordianism, then, is one of the culprits responsible for birthing the "23 enigma" meme into the mass consciousness. I had been studying Discordianism and related esoterica for several years before Jim Carrey made "the 23 conspiracy" somewhat commonplace with the movie The Number 23. Discordians don't take themselves or their "religion" entirely seriously though they do claim "It's not an elaborate joke disguised as a new religion, it's a new religion disguised as an elaborate joke."

Enter the cult of Kek. Normies were aghast at the announcement of Brexit and Trump's presidency. The idea of sigils ties into chaos magick. Sigils are images that represent some mystical goal. As a result, there are those who claim imageboards have awakened the Egyptian frog god of chaos (Discord, anyone?) Kek. In the case of Discordianism, the Greek Goddess Eris is venerated. It was Eris who tossed the Golden Apple marked "Kallisti" (for the most beautiful one) into the Olympus party she wasn't invited to. Cuz if you can't join 'em have them beat themselves over a shiny object, right?

Ah, but what does this all have to do with time travel, Tesla, Donald Trump and memeing a new reality into existence with the use of imageboards like 8chan? Stay tuned for the next installment of a series on Discordianism, the Cult of Kek and Trump Lore to find out.

We're definitely in an era of Eris's disorder and chaos, and I love it.

This is Eris's era of disorder and chaos no doubt.

Funny, when the kek stuff started it was explicitely anti-BOB and discordianism, just as it was anti-reddit and freemason.

The hidden masters of this mystery cult are not hidden. Not kekistani. Not beholden to ideas born after the fifties. Those that summoned and channel the Ogdoad are not done until they birth the son of the frog.