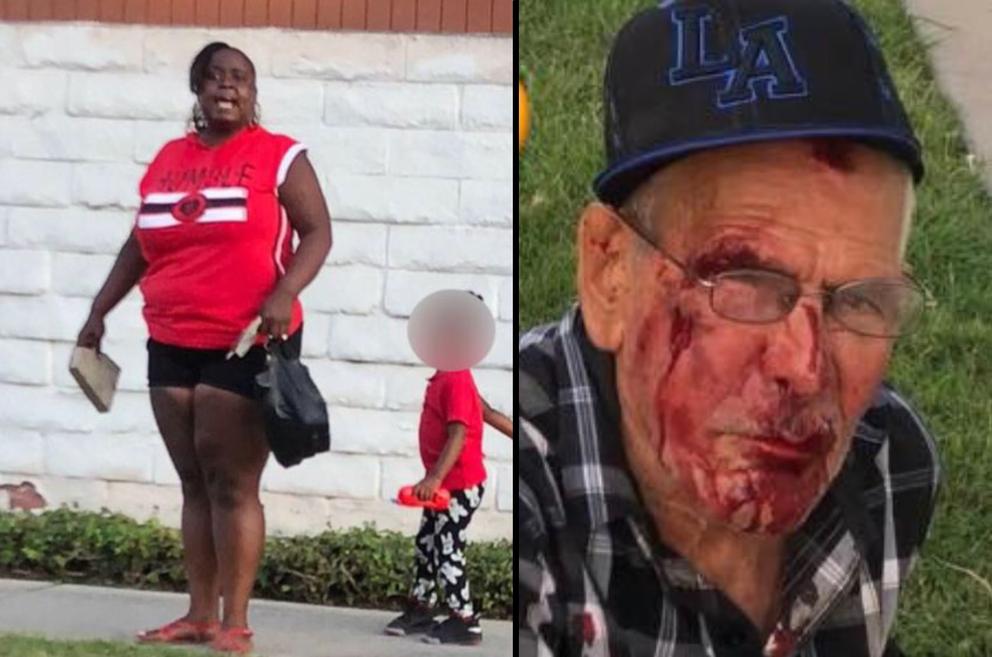 California - Racist Woman Beat 91-Year-Old Man With Brick: "Go Back To Your Country"

How big of a coward do you have to be to beat a 91-year-old man with a brick? Well, we have an answer and this is what she looks like. The racist outburst left Erik Mendoza's 91-year-old grandfather badly injured on the Fourth of July. Mendoza said he noticed his grandfather Rodolfo Rodriguez was missing and decided to go out in the neighborhood and search for him.

He was shocked to find a blood-stained sidewalk and a badly beaten Rodriguez who had to be taken to the hospital with two broken ribs and a broken cheekbone. A woman named Misbel Borjas saw the whole incident unfold and said Rodriguez accidentally bumped into a young girl while walking on the sidewalk. Borjas then watched the child's mother push the elderly man to the ground and bash him in the face with a concrete brick while yelling, "Go back to your country."

Borjas wanted to intervene and save the man but when she pulled over the woman threatened her too. "I tried to help him, but the lady said, 'If you come over here I'll hit your car with the same brick," Borjas said. She then took a photograph of the woman and her child and called 911. And if you don't know what it's like in the hood, people love to kick someone while they are down and maybe run up and snatch a wallet too. That is exactly what happened to Rodriguez according to Borjas.

A few minutes after the attack, a group of young men bounded down the street and accused Rodriguez of trying to snatch the young girl. They repeatedly kicked the crumpled old man and stomped on his head. Borjas remembered hearing him say in Spanish, "Why? Why are you hitting me? Please get away." Once the men fled the scene Borjas waited with Rodriguez for the ambulance to arrive. "It was terrible, terrible, terrible," she said. "There was a lot of blood on his head and face. He looked like his mouth and teeth were broken."

Where are the people who turned BBQ Becky and Permit Patty into a meme for calling the police? Here we have an incident of actual racism and no one is spreading this woman's photo around. Here is a tweet if you want to help the police identify the assailants. This woman should be charged with assault with a deadly weapon, she easily could have killed him.