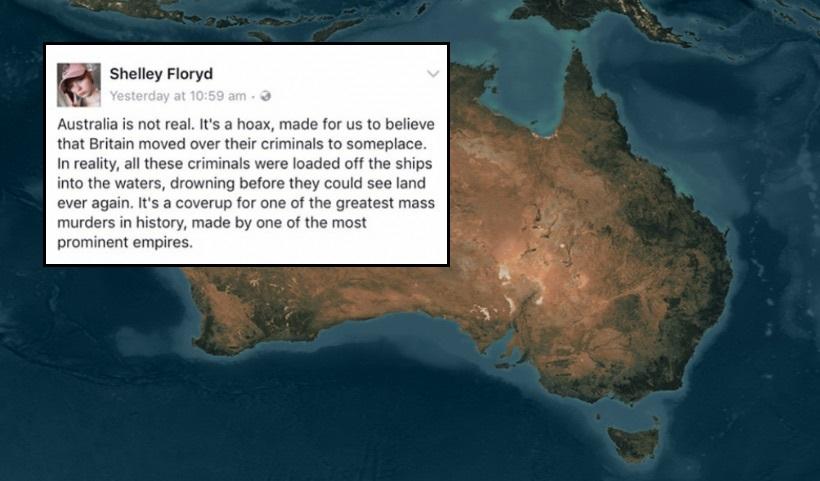 Conspiracy theories abound on the internet but I've got a very special one that defies logic: Australia doesn't exist. That's right. A theory that sprung up in a Flat Earth Society forum thread claims the land down under is merely an elaborate ruse consisting of smoke and mirrors. The theory says:

<i>"Most of you have probably been brought up believing in the imaginary land called Australia. I bet many of you even learned</i><i>about it in school. I am here to tell you the truth.</i>

<i>Well, the fact is that Australia doesn’t really exist. Everything you have ever heard about it was made up, and any pictures</i>

<i>of it you have seen were faked by the government.</i>

<i>I am sure you have even talked to people on the internet who claim to be from Australia. They are really secret government</i> <i>agents who are surfing the internet to enforce these false beliefs.</i>

<i>We are not entirely sure why the government made up an imaginary continent, or why it is trying to convince the world that</i>

<i>this continent is real, but we can tell you that we know for a fact that Australia doesn’t really exist.</i>

<i>Please join us in our quest to convince the world of the truth."</i>

Related coverage: <a href="https://thegoldwater.com/news/16741-Flat-Earth-Rocket-Man-Will-Launch-In-February-This-Time-On-Private-Land">Flat Earth Rocket Man Will Launch In February, This Time On Private Land</a>

The theory gained attention when a Facebook user named Shelley Floryd presented an argument that Australia doesn't exist and it went viral. Floryd claims all "Australians" are actors or computer-generated personalities that are "part of the plot to trick the world." According to indy100, Floryd said:

<i>Australia is not real. It’s a hoax, made for us to believe that Britain moved over their criminals to someplace.</i>

<i>In reality, all these criminals were loaded off the ships into the waters, drowning before they could see land ever again.</i>

<i>It’s a coverup for one of the greatest mass murders in history, made by one of the most prominent empires.</i>

<i>Australia does not exist. All things you call ‘proof’ are actually well fabricated lies and documents made by the leading</i> <i>governments of the world.</i>

<i>Your Australian friends? They’re all actors and computer generated personas, part of the plot to trick the world.</i>

<i>According to Shelley, the ‘plane pilots’ are in on this secret. Instead of flying you to Melbourne or Sydney, they fly you to</i> <i>islands close nearby ‘or in some cases, parts of South America, where they have cleared space and hired actors to act out</i> <i>as real Australians.</i>

Well, that is a tough one to digest. My first reaction is that Floryd's post was made in satire. But it seems that she actually believes her own theory. She concluded:

<i>Australia is one of the biggest hoaxes ever created, and you have all been tricked. Join the movement today, and make it</i> <i>known that they have been deceived.</i>

<i>Make it known, that this has all just been a cover-up. The things these “Australian” says to be doing, all these swear words</i>

<i>and actions based on alcoholism, MDMA and bad decisions, are all ways to distract you from the ugly truth that is one of</i> <i>the greatest genocides in history.</i>

<i>162,000 people was said to have been transported to this imaginary land during a mere 80 years, and they are all long</i> <i>dead by now. They never reached that promised land.</i>

<i>Tell the truth. Stand up for what is right.Make sure to spread the world – Australia is not real. It’s a codeword for the cold</i> <i>blooded murder of more than a hundred thousand people, and it is not okay. We will not, accept this.</i>

<i>Stand up for the ones who died. Let it be known, that Australia does not exist.</i>

the outback of Australia used to be covered in foliage filled with all kinds of cool creatures like gigantic flightless birds, but the aboriginals burned it all, leaving nothing but an orange desert

Australia is indeed too hellish to be anything but fictional.

Can we start locking up these nuts?