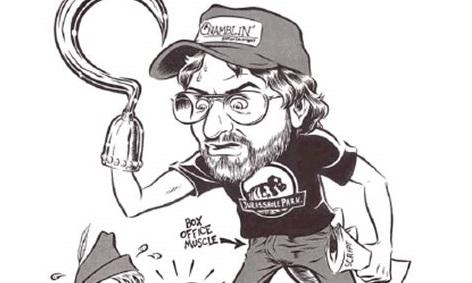 I miss Adam Parfrey. The Parf was one of those cats who, like Kenneth Anger, author of Hollywood Babylon, knew plenty of insiders and was privy to the juiciest of gossip. I wouldn't have called him a conspiracy theorist, per se, most people wouldn't I don't think but he did have a bit of the "conspiracy realist" to him. I wonder what he would think of the recent focus on Pedowood outing. It was long before Pizzagate that Feral House publisher, Adam Parfrey dropped his two cents on the subject in Jim Goad's nswer Me! magazine way back in 1993 in an article entitled Pederastic Park.

The article deals with rumors related to Steven Spielberg's "overweening fascination with child actors." Quick to note that it was still all just so much gossip but "the fact that this rumor exists at all confirms an underlying unease over the presumably innocent entertainments created by Hollywood's oldest Wunderkind."

It was 1993 and Spielberg's latest hit was the first installment in the Jurassic Park franchise. JP wasn't what Parfrey was trained in on at the moment though. No, he was more interested in the "failed" Robin Williams picture, Hook. Hook, of course was a retelling of the Peter Pan story. J.M. Barrie, the author of Peter Pan, is rumored to have been a pedophile himself.

Hook, Parfrey noted, "reveals components of the auteur's personality that have parents wondering about the movie's appropriateness for kids." Well, gee whiz, what could be more wholesome than a story about a "boy forever" whose first name is a euphemism for male genitalia and last name is a well-known god of lust who spends all his time being chased after by an obsessive, much older man?

In Parfrey's piece for Answer Me! he tells us how Hook was actually "the culmination of over a decade of false starts in bringing J. M. Barrie’s Peter Pan to the screen. At first, Spielberg was reportedly considering a live-action redo of the Disney animated feature, starring Michael Jackson as the perpetual pre-pube." Fitting, in a twisted sort of way, I suppose. Parfrey explains how the "high-concept" of a Peter Pan grown up perfectly gelled with the '"recovery" metaphysics" of 90's Hollywood. Where "continual cocaine-and-Quaalude concatenations" have been replaced by a quest to "liberate the inner child."

<blockquote>Asking Steven Spielberg to liberate his inner child would be akin to asking a serial murderer to actualize his anger. By his own admission, Stevie has experienced little in the way of adulthood outside of his overprotective upbringing and the adulatory, toadying fantasy land of Hollywood. Bradshaw’s “inner child” therapy is a mere baby-step away from the Diaper Pail Fraternity, a Sausalito-based group for grown men who revert to incontinent fantasy, where surrogate mommies exclaim and coo as they wipe the kinky kid-fetishists’ dirty behinds.</blockquote>

Parfrey drops names like "ex-drunk" John Bradshaw and former Spielberg producer Julia Phillips as he evokes images of workshops where infantilized Hollywood types rock and cradle each other as lullaby music plays.

Hook came out at "at the crest of the child-abuse wave" when the media was bombarded with cases of molestation, incest and institutional pedophilia and ritual abuse. Parfrey felt the visual aesthetic appeal of the Hook movie poster "transferred any possible pedophilic overtones from Spielberg himself (the auteur hero) to the classically pederastic fantasy figure of Captain Hook."

Parfrey went so far as to hunt down and speak with a writer for the NAMBLA Bulletin, L. Martin whose job it was to track "the doings of such Hollywood chickens as Macauley Culkin, known affectionately in the bulletin as 'Mac.'"

“Spielberg is known for his interest in young boys, certainly,” said Martin. “A lot of the members have been talking about Hook, telling me how much they enjoyed it.”

Parfrey tells us the NAMBLA spokesman "refused to confirm or deny" the director's potential membership in the organization as they keep their membership private, but he points out another "pederastic magazine" known as P.A.N. (Paedo Alert News). Parfrey deconstructs several other Spielberg films in the excellent article (linked below) and if you haven't sworn of the Spielster yet, by the time you finish the piece you may just be done with him for good. As he points out, "perhaps the most perverse aspect of Steven Spielberg's work is its obsessive posture of sentimental innocence."

If you've been paying attention to /pol/ lately, you have certainly noticed that Hollywood has dropped the guise of innocence as of late.

What happened to Heather O'Rourke? What are the elite of Hollywood trying to cover up? Why are their so many degenerates that are pro-pedophilia involved in children's programming? If you take time to dig up information you will be disgusted with what you will find. James Gunn and Dan Harmon are low level fall guys for the ones truly in control of the entertainment industry. There is much more to be uncovered and it doesn't stop or end here.

GET EDUCATED AND REMOVE THE PARASITIC SATANIC CABAL RUNNING THE SHOW

IF you want to KNOW where this abomination of pedophilia originates from the Talmudists Jews you need to go to youtube & watch :

" When israel is mighty".

The video has written english translation. Just be patient until translation appears.

Warning: Watch BEFORE eating because what you will hear is very disturbing. You have been warned.

IF you like reading get book " The Weight of Three Thousand Years" written by now deceased Israel Shahak ( righteous Israeli Jew). In Amazon or your local library.

Pray we are living in very UnGodly times.

I love conspiracy nuttjobs, I speacially love the they throw rocks at jews when the creators of said conspiracies are usually Christian zealots