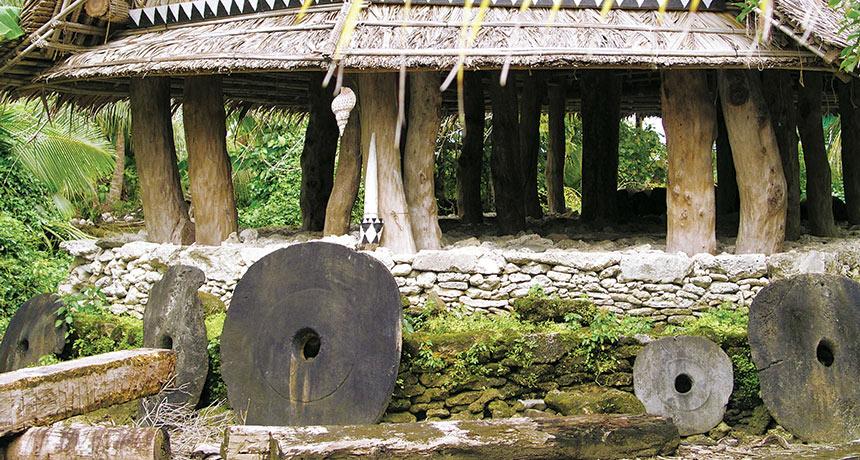 It turns out the revolutionary idea behind the digital form of money known as cryptocurrency such as Bitcoin might not actually be as new as once thought. The technology behind cryptocurrency is called blockchain and its used to record digital transactions on a public ledger, but at least several hundred years ago, islanders in Micronesia used similar ideas conduct business, according to archaeologist Scott Fitzpatrick of the University of Oregon in Eugene.

"Stone money transactions on Yap were the precursor to Bitcoin and blockchain technologies," Fitzpatrick said at April's annual meeting of the Society for American Archaeology in Washington D.C. There, Fitzpatrick explained the connection between the massively carved stone disks, some as heavy as a sedan and taller than one, and today's cryptocurrency.

Fitzpatrick thinks that inhabitants of Yap sailed to other islands in Micronesia to quarry limestone from caves and sea travelers negotiated with local leaders for access to limestone deposits. Stone carvers would go along for the ride and formed stone disks on the site. A central hole was cut into each chunk of rock so men could run a wooden pole through the opening and hoist it. These giant stone coins were then used as currency called rai and transported on rafts.

Each rai had a particular value based on size, evenness of shape, stone quality and risks taken to get the stone to where it is. After being inspected and verified by a local chief, rai were then displayed at community locations. Ownership of a stone disk could change, for a wedding fit for example, or to secure political allies, but the stone circle itself would never move.

Much like Bitcoin miners solve complex mathematical puzzles to release units of currency, stone carvers etched out the stone disks and they were used and displayed publicly. Anthropological archaeologist Kathryn Sampeck of Illinois State University said the comparison of stone money to blockchain technology "is legitimate" while other researchers argue that rai don't qualify as currency.