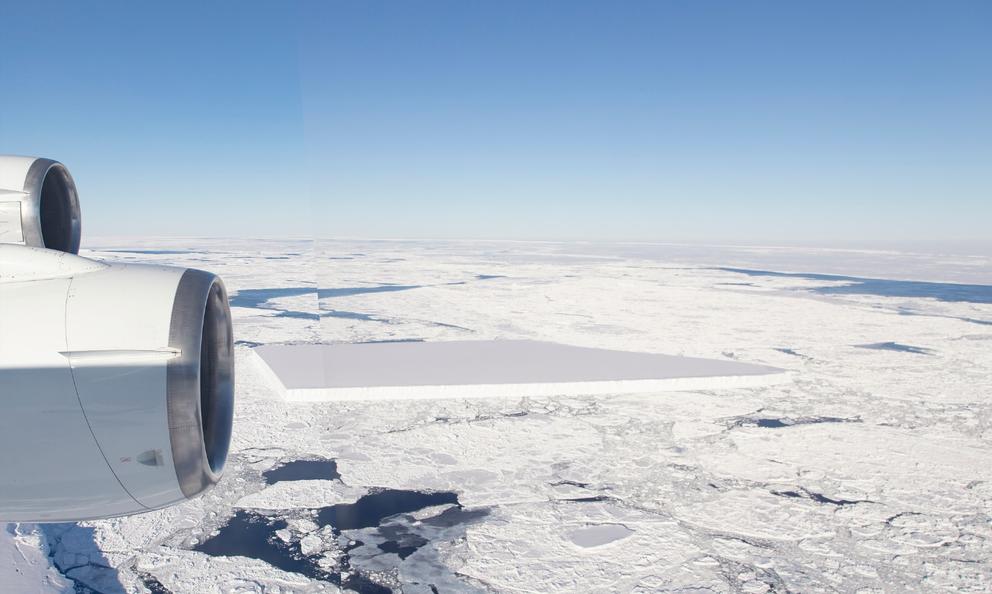 No doubt many of you already noticed the seam in the thumbnail of this article, but that seam is supposed to be there and represents where two panoramic images were spliced together to give a full view of the rectangular iceberg. What is so strange about this iceberg is its shape, it is literally a perfect rectangle as if it were cut out from one giant chunk of ice with a laser or something.

At first, it wasn't clear how geometric the giant berg was but new photos have spliced the images together to reveal its true shape. A company called IceBridge showed that although it is not a perfect rectangle, it is a highly angular quadrilateral which is unusual, to say the least.

The rectangularly shaped iceberg has stills served to have those who know most about the polar regions scratching their heads. No perfect square exists in nature, but it is clearly not a perfect square, just a very close approximation. Could it have been the result of some secret technology test and teleported from another glacier?

No one really knows what makes this square iceberg such a square, but IceBridge senior support scientist Jeremy Harbeck is the one who spotted the tabular iceberg near the Larsen C ice shelf. Tabular icebergs are said to be the result of calving ice shelves which basically means when a large chunk of ice suddenly breaks loose from the rest of the berg.

Tabular icebergs are known for having highly angular lines and very smooth surfaces. Harbeck said in a statement to NASA, "I thought it was pretty interesting. I often see icebergs with relatively straight edges, but I’ve not really seen one before with two corners at such right angles as this one had."

In July of last year, Antartica's Larsen C ice shelf released the enormous A68 iceberg which weighed an estimated 1,000 billion tons and was the size of the state of Deleware. Harbeck was investigating A68 with some colleagues when they spotted the massive tabular berg.

"I was actually more interested in capturing the A68 iceberg that we were about to fly over, but I thought this rectangular iceberg was visually interesting and fairly photogenic, so on a lark, I just took a couple photos," Harbeck said. He flew over the area on October 16, 2018, but on a second flyby, he noticed the strangely exact tabular iceberg in the horizon.

He noted that the expanse along the horizon line is a free-floating iceberg measuring about 100 kilometers or 60 miles in length and another 18 miles wide so its no small iceberg.

what the what… huh

Comment from the person who took the photo in earlier OCT.

"… capturing the A68 iceberg ….I just took a couple photos,” says Harbeck.“ I often see icebergs with relatively straight edges, but I’ve not really seen one before with two corners at such right angles like this one had.”

Plus we have admitted PHOTO-SHOPPING of the pic above by a company called IceBridge.

"… new photos have spliced the images together to reveal its true shape. A company called IceBridge showed that although it is not a perfect rectangle…"

The individual who is reported to have viewed

the iceberg, Jeremy Harbeck, did not understand

the scale of distance through the aircraft window

- even if the image was not photoshopped.

At maximum turbofan altitudes the iceberg

dimensions would be one tenth those supposed

There are 16 visual cues defining

spatial awareness - several are not available

in this circumstance, giving rise to the error.

about climate and is meant to reinforce those

erroneous assumptions in the minds of the

unwary or the uncritical.

NASA has had a credibility problem for many

Political Science is not Science.

Oh. I thought the Nazis did it. You know… because of grandpa Bush. Thanks for the education.

Christianity is not a false religion and Jesus Christ is real. The bible speaks of the worship of that meteor and the people whom worshipped it. And they continually chanted Diana is great. The bible is the truth. what does alla akbar mean? That's where the chant came from. If the pope is mystery Babylon then he would be against Jesus Christ. Hence deceiving people of the truth of Christ. Because the pope wants to be worshipped as the one and only religion in the world. He is the false prophet.

Acts 19:34-334But when they knew that he was a Jew, all with one voice about the space of two hours cried out, Great is Diana of the Ephesians. 35And when the townclerk had appeased the people, he said, Ye men of Ephesus, what man is there that knoweth not how that the city of the Ephesians is a worshipper of the great goddess Diana, and of the image which fell down from Jupiter?