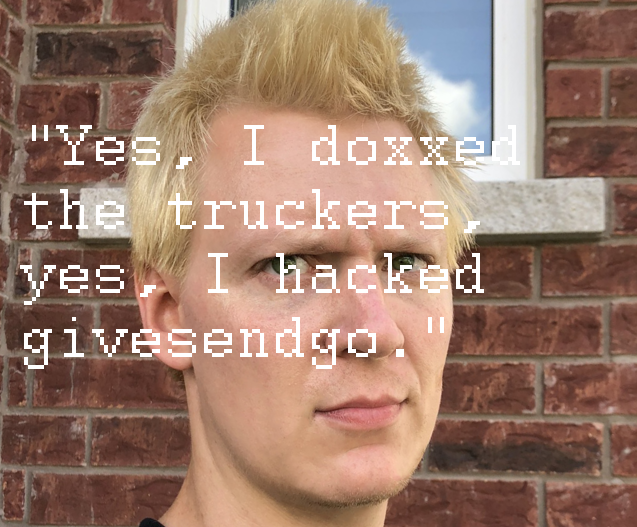 "Nothing scares me nothing. Yes, I doxxed the truckers. Yes I did it, it was me. I hacked GiveSendGo [Christian, GoFundMe alternative that was being used to fund the trucker convoy in Canada, where Cottle lives], baby!" Aubrey Cottle, the self-proclaimed "founder of Anonymous," screams into his camera on Twitch or is it TikTok in between, well, some sort of twitching or other tic that seems to be going on. Considering Cottle's much discussed past and even recent videos released here at The Goldwater, Cottle is sadly in the depths of addiction. His erratic and anti-social behavior, attacking Barrett Brown for outing his connections to feds and neo-nazis, for instance, is not justified by the drug use however. Though it does make it all make a little more sense.

"And I'd do it again." He keeps adjusting himself in the swivel gaming chair he records from and screams at the top of his lungs, "I'd do it a hundred times." It's actually sad to see Cottle go viral for his unhinged behavior rather than "hacking" Parler, Gab and other sites.

We released documents in July showing FBI assets led by Nazi leader Weev and fronted by racist police asset Aubrey "Kirtaner" Cottle were planning to conduct major #Anonymous hacks that would be blamed on #Antifa. It just happened via #GiveSendGo. https://t.co/VnSb7NK5TY

"You can literally put my name into the news tab on Google... I am literally in every mainstream media publication for the things that I do. I'm not an unknown actor. I'm literally a famous f****** cyberterrorist."

Indeed, because cyberterrorists who don't work with the feds aren't able to launder their reputation of being kicked off SomethingAwful forum for hosting child pornography on the /pedo/ board that pedophile and Gamergate figure Sarah Butts openly spoke of as containing nude and sexual images of small children. "Honeypots, how do they work," Cottle foams at the mouth as he tries to address the long-running accusations of pedophilia and hosting child pornography that have dogged him for well over a decade.

Cottle goes on, breathing heavily, to claim that the reason "they always default to the pedophile accusations" is simply projection. But why did these accusations begin so many years ago and continue to this day? It's plain that, as journalist Barrett Brown has painstakingly pointed out, not only are the bulk of the mainstream media who were not embedded within Anonymous as Brown was, overly credulous believing Cottle's "founder" claims but that he is more likely one of the reasons why many imageboards became fed entrapment amusement parks. Speaking of projection, Cottle along with the former administrator of 8chan who stepped down after Jim Watkins nuked two boards that were getting a bulk of the traffic by catering to pedophiles is responsible for the spurious "research" Mother Jones used to claim that some clearweb child porn ring was running openly on the surface web without feds having any knowledge of it. Brennan, former owner/admin at least is smart enough to know there's no truth to that, but likely even a scriptkiddy like Cottle does as well. It's ironic how hard both have worked to "rebrand" to escape their fairly infamous former reputations by becoming the "heroes" fighting to take down 8chan/8kun and Qanon.

By the early 2010s during the time that Cottle was, he now claims, "leading Anonymous" LulzSec and other groups and hackers like Sabu were being turned into FBI assets. At the height of this, about half of the active black hat hackers on the net had already been turned to work for the FBI. Cottle has both claimed that he helped entrap pedophiles with his site, that his site didn't contain pedophile materials, that he worked with law enforcement that he has never worked with law enforcement, that he hates racists or that he's tight with (neonazi admin of the Daily Stormer) weev, depending on which suits his aims best for the moment.

I think honestly the saddest part of all, however, is even after selling his soul to the feds or whatever deal or deals were made that led to the destruction of the original "Anonymous" from within c. 2011/2012, Cottle, or "Kirtaner" as he calls himself online, is still basically unknown to the majority of people.