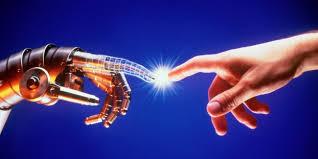 Religious Perspectives On AI And Transhumanism

Artificial intelligence, transhumanism, the singularity, embedded microchips, these are topics that certain religious people find threatening. For some Mormons and certain Catholics however, the idea of a Transhumanist, cyberpunk future weaves seamlessly into their spiritual beliefs. Pope Francis just recently made a mention of Artificial Intelligence at the World Economic Forum in Davos, Switzerland.

“Artificial intelligence, robotics and other technological innovations must be so employed that they contribute to the service of humanity and to the protection of our common home, rather than to the contrary, as some assessments, unfortunately, foresee,” Pope Francis wrote.

The Catholic Church has been involved closely in scientific advancements in the past as well. The term "Big Bang" was coined by Belgian Catholic Priest, astronomer and physicist Georges Lemaître. Pope Francis has even mentioned <a href="https://futurism.media/extraterrestrials-and-the-roman-catholic-church">the possibility of ETs</a>. The Catholic Church has also made no secret of it's <a href="http://www.openminds.tv/lucifer-is-helping-vatican-astronomers-look-for-extraterrestrials-970/19968">involvement with the search for extraterrestrial life</a> using the LUCIFER telescope.

Catholics aren't the only Christian sect who have an interest in some bleeding edge tech that verges on Sci-Fi either. Several folks involved in The Church of Latter Day Saints, or Mormons as many outside of the church refer to them, are very interested in the potential of Transhumanism. Considering the fact that LDS brought sci-fi, space and alien gods to religion long before Scientology, this shouldn't be too surprising. <a href="https://transfigurism.org/">The Mormon Transfigurists</a> are dedicated to the ethical use of advanced science and technology. The Mormons are also closely connected to H+ (Humanity plus) the organization that the World Transhumanists Association of the 90's and on morphed into several years back.

Mormon Transfigurists support the Transhumanist Declaration that was created in 1998 when the World Transhumanist Association (WTA, now H+) was initially founded.

Humanity stands to be profoundly affected by science and technology in the future. We envision the possibility of broadening human potential by overcoming aging, cognitive shortcomings, involuntary suffering, and our confinement to planet Earth.

We believe that humanity’s potential is still mostly unrealized. There are possible scenarios that lead to wonderful and exceedingly worthwhile enhanced human conditions.

We recognize that humanity faces serious risks, especially from the misuse of new technologies. There are possible realistic scenarios that lead to the loss of most, or even all, of what we hold valuable. Some of these scenarios are drastic, others are subtle. Although all progress is change, not all change is progress.

Research effort needs to be invested into understanding these prospects. We need to carefully deliberate how best to reduce risks and expedite beneficial applications. We also need forums where people can constructively discuss what should be done, and a social order where responsible decisions can be implemented.

Reduction of existential risks, and development of means for the preservation of life and health, the alleviation of grave suffering, and the improvement of human foresight

and wisdom should be pursued as urgent priorities, and heavily funded.

Policy making ought to be guided by responsible and inclusive moral vision, taking seriously both opportunities and risks, respecting autonomy

and individual rights, and showing solidarity with and concern for the interests and dignity of all people around the globe. We must also consider our moral responsibilities towards generations that will exist in the future.

We advocate the well-being of all sentience, including humans, non-human animals, and any future artificial intellects, modified life forms, or other intelligences to which technological and scientific advance may give rise.

We favour allowing individuals wide personal choice over how they enable their lives. This includes use of techniques that may be developed to assist memory, concentration, and mental energy; life extension

procedures; and many other possible human modification and enhancement technologies.

Besides Catholics and Mormons, there have also been Jewish and Muslim thinkers exploring the challenges of justifying religion and the ethical questions that advanced science is raising. Recently a group of Protestant computer scientists published a series related to “questions for Christians about AI and its role in society.” In the fall of 2017 there was even an <a href="https://cruxnow.com/church/2018/05/26/the-holy-ghost-in-the-machine-catholic-thinkers-tackle-the-ethics-of-artificial-intelligence/">AI conference sponsored by the Pacific Coast Theological Society</a>.

Religion and Science have both existed side by side in some sense for thousands of years. Our technology continues to advance exponentially, however, can our wisdom, spirituality and emotional intelligence keep up with the challenges that new technologies bring?

What could possibly go wrong?