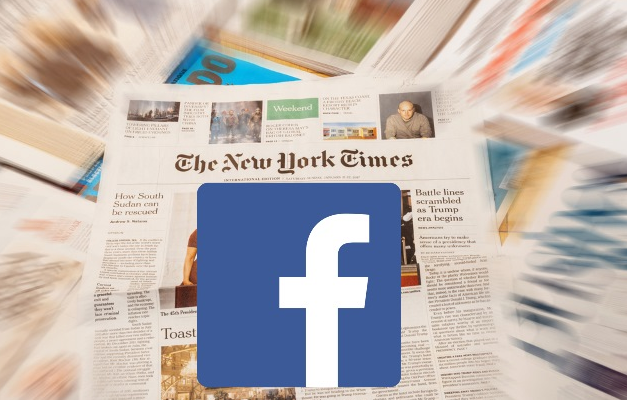 The New York Times was quick to report on how Alex Jones was cut off from the tech giants and called him a man who made his living off conspiracy theories, but the paper has now found itself the target of censorship after one of its articles was deleted from Facebook for violating community standards. An article published by the paper about conflict and hunger in Yemen was circulated on Facebook until all posts of the article were removed.

Facebook cited the reasoning for the removal of the article was because The New York Times had violated its community standards by showing photos of a starving, shirtless child. The Times article featured many images of emaciated children in varying states from listlessness to crying. But <a href="https://www.nytimes.com/interactive/2018/10/26/world/middleeast/saudi-arabia-war-yemen.html?smid=fb-nytimes&smtyp=cur">one 7-year-old girl named Amal</a> was pictured lying down shirtless with so little meat on her bones that her entire rib cage and collarbones were visible.

Ironically, it wasn't just the New York Times Facebook which had received an email notification that the post was not in line with the platform's standards, it was every single reader who shared the article. A Facebook spokeswoman offered an explanation Friday night saying, "As our community standards explain, we don’t allow nude images of children on Facebook, but we know this is an important image of global significance. We’re restoring the posts we removed on this basis."

Related coverage: <a href="https://thegoldwater.com/news/40701-Alex-Jones-Style-Takedown-Template-Is-Being-Used-Against-Gab-and-Now-LifeSite">Alex Jones-Style Takedown Template Is Being Used Against Gab and Now LifeSite</a>

The article was about the suffering of the Yemeni civilians caught in the crossfire of a war so devastating that it left children in the states that were pictured. The war was being fought by the Houthi rebels and their allies against a Saudi-led coalition which used American-supplied bombs and intelligence to go on airstrike campaigns that killed thousands of civilians. Yemeni families are left to pay the price of the economic warfare and the country is at risk of running completely out of food.

Many Yemeni families are starving after the three-year war left what fragile economy was in place in ruins. The killing of a Saudi dissident journalist named Jamal Khashoggi recently highlighted the actions of the country across the region. New York Times editors scrambled to justify their article despite it being deemed "not in line with Facebook community standards."

The followup article said of the images in question, "They are brutal. But they are also brutally honest. They reveal the horror that is Yemen today. You may choose not to look at them. But we thought you should be the ones to decide." A graduate student in Washington named Jarjieh Fang saw the article around noon Friday and found the photographs to be extremely shocking.

"I thought it would be something worth sharing, to sort of jolt people to start paying attention to what’s going on in Yemen," Fang said of why he chose to share the article. He had posted a direct link to the article on his Facebook page and within a couple hours had received a notification from Facebook that his post had been taken down.

The notification offered this explanation, "On Facebook, we don’t allow offers of sexual services, solicitation of sexual material, threats or depictions of sexual violence, threats to share intimate images or any sexual content involving minors."

Related coverage: <a href="https://thegoldwater.com/news/36972-QAnon-How-do-you-demonstrate-reasonable-cause-to-regulate-and-or-break-up-BIG-TECH">QAnon: How do you demonstrate 'reasonable cause' to regulate and/or break up BIG TECH?</a>

There were dozens of Facebook users who complained about getting similar notifications but it is unknown how many people had their posts removed. The story was shared tens of thousands of times before it was removed and yet it has been reinstated on the official New York Times Facebook page. Wait, how could the post not be removed from The New York Times yet anyone who shared it had their posts deleted?

A rather simple explanation was offered by a Facebook user named Patti Floyd who noticed that the image of the starving girl was the thumbnail when the article was shared. Floyd wrote, "For all of the people spouting off instead trying to understand: a computer algorithm removed the post because a picture of a topless child was interpreted (by a computer program!!) as child pornography. Since any decent person should agree that child pornography is an issue that should be monitored, the algorithm was in place to protect children. When the issue was evaluated by humans, the post was deemed not to be child pornography and reinstated."

The absolute need for oversight for all public platforms is becoming crystal clear. We need to place limits on the power to delete , abridge. or edit posts on any platform where public access or comment is allowed. We must stop the sensors of free speech.

sure, facebook is owned by jew-filth, Zuckerberg and the jews are helping the evil Saudis genocide children in Yemen.

Steven Lee - All you need to do is delete FagBook and the like. No government oversight needed to place limits. Just don't use it, its that simple and if enough people refuse to use these platforms they will go the way of myspace or a-o-hell messenger.