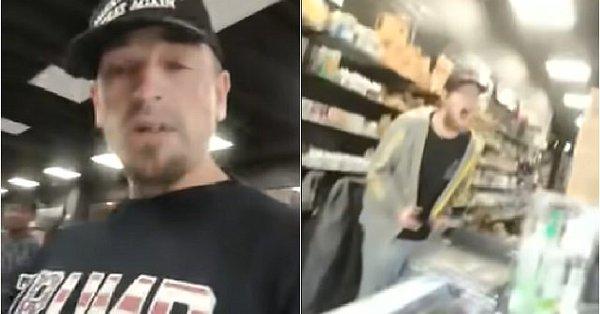 Outrageous liberal arrogance and crazy rants do not pay as proven in the case of the Georgia vape shop employee who raged and attacked a customer simply for being a Trump supporter. The wild lib has since been fired from his job because of his ugly and violent outburst.


The shop’s owner, Xhale City has also not only fired the way off mark employee but also apologized for his unacceptable behavior. The store released a message to the public that says: “To our friends and customers, tonight we had an employee act improperly toward a customer. Xhale City does not tolerate this kind of behavior from its employees.”

The message also added how it feels about the employee’s meltdown and continued: “When we identified the employee (was) at fault, we fired him immediately. We’ve also spoken to the customer and apologized.”

The basis for the erring employee’s punishment is the now viral video showing the said employee kicking a customer out of the vape store simply for wearing a MAGA hat and a pro-Trump shirt. The customer stood his ground started video recording what was happening in the store and the employee simply lost it- lashing violently at the customer and refusing to sell to him.

The customer has been identified as 36-year-old Ian Furgeson, who was subjected to a lot of screaming and cursing by the employee who was enraged by his being pro-Trump.

The video caught the liberal employee shouting at the top of his lungs repeatedly, “Leave the store!***k off! Get the ***k out of here!” The crazed lib was even seen attempting to take a swing at Furgeson.

The misguided employee’s unreasonable rants against a paying and otherwise behaved customer will go down as one of the wildest, craziest and ugliest meltdowns of 2018.

Why doesn't the MSM descend on this asshole and shop's owner for REFUSING TO SELL VAPE MERCHANDISE to a MAGA supporter.

Same G.D. situation as a Christian owner refusing to make a cake for a Gay couple.

Damn. This is the store I go to. Dude is always rude too. So I'm not surprised at all he did this. He has mental health issues for sure. https://t.co/LQUPagFUda

America watch this. Proof of INSANITY of left. Now duty of every @realDonaldTrump voter to go into every store in America and make liberal employees lose their minds & videotape their mental illness. No right to work for living w/this attitude. #YOUREFIREDhttps://t.co/GfMbw4a88x

Post your beliefs on the door and let everyone come in. Crazy TDS lunatics are almost always anti religious. Some cake shop owner in order to see if they would be harassed by LBGT people, should post they support what Muslims are doing to their "community". See how much business they get or attention from the media. Could be quite a marketing ploy for a company not doing so good. Bet you wouldn't get to many of those goofballs to give you their name and address. Hell if libs burn it down, you would have insurance money out of the market.

There is a huge difference in the cake baker and this. Having a product on the shelf ready to sell is different than forcing someone to use their artistic abilities to create specifically, for something they object according to their faith. The baker offered to sell any cake in the store that was already made and for sale. But no. The fag wanted a cake made to his specifications. BIG BIG DIFFERENCE. HUGE!!!! That's why SC ruled in favor of the baker.

Get a rope. I like the way George Carlin thinks "Live and let live, anybody who can't deal with that, take em out back and shoot the motherfucker"

Get a rope. I like the way George Carlin thinks "Live and let live, anybody who can't deal with that, take em out back and shoot the motherfucker"

Its mind blowing to see someone go that stupid over politics, however I work with someone tha hates Trump but doesn't melt down, just refuses to discuss why.

Cake shop owners do custom cakes. Cheaper to go to a grocery store or Dairy “Queen” than to one that does specialty items for weddings

Full of odd balls, Thugs, and Liberals.
Crime has come to this once great community and even the Strip clubs are closing and moving.

It has a crime rate of 41/1000 thousand residents. So Tucker has one of the highest crime rates in America.

But there are some trying to turn it around despite the politicians who are working with the Land Speculators to buy key parts cheap.

I'll not waste your valuable time.

The too long didn't read version of this comunicado is that we have multiple clients in similar but non competing industries and we think you'd make a great link partner.

Hello guys! I have just been employed by Peaches and Screams UK to do their onsite SEO work and I now have access to the online store. As you may now, this online store has a popular blog devoted to vape and CBD and a few top CBD brands are already featured in this blog.

I can publish your sponsored guest posts with one do follow backlink going to thegoldwater.com on one of UK's most popular sex toys and sexy lingerie sites! Yes! Backlinks do not get better than this.

The site has VERY SOLID domain metrics and over 150,000 to 200,000 monthly UK traffic. The site is featured in all top magazines such as Vogue, Allure, Tatler, Cosmopolitan, BBC and many others.

This opportunity will not last forever! You will need to provide me with a quality guest post of circa 2,500 words on a topic related to Peaches and Screams. They will not allow me to publish junk so the work has to be of the very highest quality and written to the very highest standard of English.

The charge for this guest post is £250. I am only accepting 10 articles per month for quality control purposes.

I will only accept links to reputable and quality sites. I cannot risk my job and the site's reputaiton by publishing junk content.

I look forward to your response.

I need to know if you would like to buy my Global E-Mail List of All Vape Companies in the World! This database is very good for marketing. Please let me know if you need it.

The liberal buffoon got fired! Sweet! It needs to happen more often.

Sirhan Paroled? The Truth Of the RFK Assassination