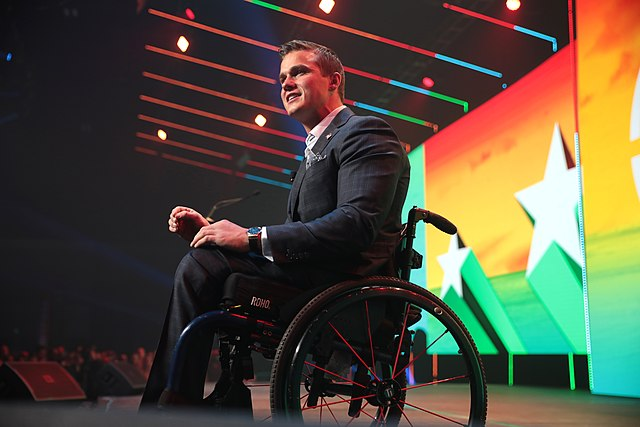 Madison Cawthorn is in the news again today. He was recently cited for trying to bring a loaded gun onto a plane. This is not even the first time he has been cited for that, however. On top of that, Cawthorn is also possibly facing insider trading charges according to a class action lawsuit that alleges the "Let's Go Brandon" cryptocurrency is a pump and dump scam.

The Let's Go Brandon coin achieved $570 million market cap valuation shortly after Brandon Brown announced that he would be sponsored by LGB. The price however quickly plummeted by the time the news that NASCAR was avoiding the sponsor due to a large number of insider/whales owning the majority of the coin. The group Public Citizen spoke with the Washington Examiner about the issue. They explained that Cawthorn could be accused of insider trading if he knew about the NASCAR announcement before December 30.

"I just told him he's lost my trust," McCarthy told Axios, "he's gonna have to earn it back, and I laid out everything I find is unbecoming. And you can't just say, 'You can't do this again.' I mean, he's, he's got a lot of members very upset."

Now of course the idea of Congressional coke and sex parties doesn't seem all that unbelievable but Cawthorn's claims are perhaps due to him being upset he's not invited to any of the real ones, leaving him to make up stories. Several of Cawthorn's Republican colleagues were fairly upset with the hard to buy claims.

What is perhaps most ironic about the whole thing is that Cawthorn claims to be attempting to preserve sexual purity. Aghast at the debauchery he's discovered in Babylon D.C. This strikes me as hypocritical in the extreme considering that Cawthorn was denounced in his time at Patrick Henry College as a sex pest who repeatedly sexually harassed multiple women. Bear in mind, this was a conservative, Christian campus that he earned the reputation of physically and verbally harassing women sexually.

We could chalk this up to youthful hubris, perhaps, considering he was the youngest-ever member of Congress as of last November. You could also point out the fact that he's likely not the worst of his type in the Congressional chambers, but that sort of defeatist attitude isn't productive. Sadly, the political game often attracts the worst of self promoting grifters ready to sell out the electorate to advance their own goals. The likes of Nancy Pelosi prove that age is not the deciding factor here. The issue, instead, is one of integrity and the lack of such besmirches the institution of our legislative branch regardless of the

Considering how many of the women at Patrick Henry College also brought up stories of terrible and reckless rides in his vehicle, it seems that in addition to his difficulty telling the truth, he has issues with recklessness in general. Repeatedly lying, including about your colleagues, claiming the friend who saved him and was nearly killed or crippled by his actions left him "in a car to die in a fiery tomb." Gee, whatever happened to good old fashioned "thank you?"
Share this article

I wonder a lot about Madison Cawthorn. It's not surprising to me that a member of Congress has some skeletons in the closet or even some current "issues". However, I think there is a real possibility that Madison Cawthorn, whatever his failures and recklessness, is a legitimate threat to the Washington establishment and that is why his problems are blown up huge while the massive "misdeeds" of the rest of Congress are conveniently swept under the rug. Think about it: An accusation of "insider trading" against Madison Cawthorn but NOT Nancy Pelosi or anyone else in Congress?! Furthermore, coke addled legislators and orgies are quaint problems from more "normal" times. I'm convinced Washington elites are human traffickers and abusers of unimaginable proportions who intentionally foisted bioweapon injections on America.

Free Speech for Me but Not for Thee: America First Endorses Flagging and SJW Tactics

Free Speech for Me but Not for Thee: America First Endorses Flagging and SJW Tactics

Behind the Scenes on Kai the Hitchhiker Book: The Project Files

How Can a US-Born Citizen Lose Their Citizenship?

Behind the Scenes on Kai the Hitchhiker Book: The Index Card Box