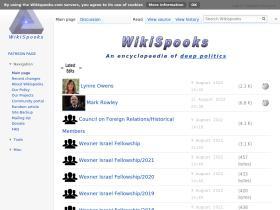 Wikispooks, Cryptome and Whale.to were excellent repositories for information about the security state that I regularly would refer to. Including archives of news stories pulled from mainstream media and relying on FOIA and other reliable data the site was still decried by the usual suspects as a "conspiracy theory site." And by usual suspects I mean the type of people with connections to USAID, National Endowment for Democracy, Atlantic Council and other CIA and NATO infowarfare fronts.

Abbie Richards, the "disinfo expert" who created the disinformation pyramid that claimed that belief in Bigfoot was antisemitic and Iran Contra drug running was a conspiracy theory writes for the website gnet-research.org. Sites such as gnet and anything connected to the likes of Louise Mensch, Nina Jankowicz and Rita Katz purportedly the "disinfo experts" are often vectors of disinformation themselves. A gnet article by an "OSINT analyst" who has worked for Homeland Security has called out Substack users and the wikispooks site.

For the moment, I have not seen any news as to what exactly happened to the site but since about August 26th the site has been unreachable. I will be checking the wayback machine and other archive sites to see what pages can be salvaged and will likely work on mirroring at least portions of whale.to because in the era of "disinfo experts" being the primary purveyors of disnfo these sorts of repositories are especially important.

Business Insider wrote a scare piece about Wikispooks in 2020 regarding the "spike in traffic" that occurred during the early days of covid "conspiracy theories" (yes, those same "theories" that in some cases have since been confirmed or at least looking more likely even based on "official data"). The Insider.com story specifically named Google as a way that people were arriving at the site, considering how Mark Zuckerberg admitted deboosting and shadowbanning anything related to the Hunter Biden laptop due to FBI claiming it was Russian disinfo its easy to see that the tech companies are subservient to the security state and in some ways possibly vice versa.

I know for a fact I'm suppressed and shadowbanned. Even searching for my own interviews on YouTube is often difficult and have received emails from people saying they were only able to find material I put on YouTube or my personal site by using Yandex, DuckDuckGo, Brave or other privacy centered browsers. The long term effects of this sort of suppression of the truth and convincing people that the only truth can be found at the corporate Mockingbird media leads to situations like the Epsteins, Weinsteins, Cosbys and Nygards using their wealth and connections to get away with awful things for years.

In short, alternative media is becoming more and more under attack and its vitally important to support and share the work of those who are trying to expose what the MSM canaries want to keep hidden.
Share this article

Fact: wikispooks.COM has been down since the 25th (last "WHOIS" update), due to the status of the domain: clientHold: "This status code tells your domain's registry to not activate your domain in the DNS and as a consequence, it will not resolve. It is an uncommon status that is usually enacted during legal disputes, non-payment, or when your domain is subject to deletion".

The three DNS servers do not seem to be responding: two are in Germany (one belongs to CSL -yoker.com- which is the company with which they have the domain and hosting, and the other to Hetzner) and one in Canada (OVH).

If there had been "non-payment" to CSL/Yoker, the hosting would have fallen, not the domain (it can be said that it is a kind of "domain hijacking").

On reddit the subject has been discussed but nobody knows anything about it. I found a forum where the topic is discussed with interesting contributions: craigmurray.org.uk/forums/topic/wikispooks-has-vanished/

In this forum a user proposes a solution: change the hosts file. I don't recommend it, just enter the IP address directly in the browser: 198.199.127.59. You will be able to see, apparently, Wikispooks. The IP is from Amsterdam (Netherlands), and it seems to be a MIRROR SITE. As far as I know, we cannot know if this site is reliable and legitimate or not. BEWARE.

The weekly backups have continued, so we have the one from last Sunday. But until we know that this supposed mirror site is reliable, I wouldn't trust it. I have the backup from Sunday the 21st.

Assuming that it really is a mirror site, and is trustworthy, we can conclude several things:

- Natalya Vovk, "a Ukrainian national who has been designated as the main suspect of murdering the Russian journalist Darya Dugina on 20 August 2022".

- Darya Dugin, "the daughter of Aleksandr Dugin and, according to the CCM, a journalist for Russian state-sponsored news agencies (...) assassinated in Moscow via a car-bomb or some other incendiary device planted in the Toyota Land Cruiser she had been driving", and

- Myrotvorets, "a Kyiv-based, allegedly 'NATO-backed' (see section Technical aspects) website, that publishes an Ukrainian kill list which contains personal information, including addresses, of people who are considered 'enemies of Ukraine'".

In any case, what seems certain is that we are dealing with an intelligence issue related to the current war in Ukraine.

After having spoken to our friend from the other forum, I have been able to verify that the IP address is correct.

I recommend the solution he proposes:

"By adding the line:

to my /etc/hosts file I can access the site".

Another option is to enter the IP address directly into the browser.

Good luck to all. Take care.

thanks for the info, Oscar!

In the forum I mentioned in my first comment we can read the reason for the censorship:

"(...) the domain registrar turned off the DNS after receiving legal threats relating to our Tracy Twyman page".

The solution proposed before is still valid. I recommend consulting the forum in question for updates on the matter.