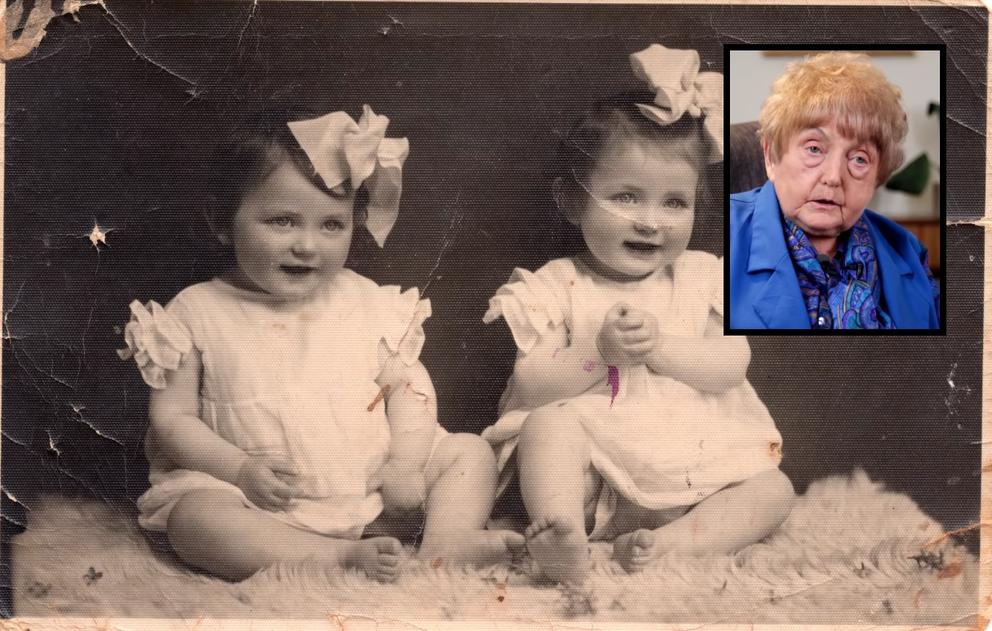 Ask anyone about the Nazis and they'll tell you they were bad people who tried to kill the Jews, but most people don't know any more than that when it comes to the horrors that went on at Auschwitz. In fact, most people think that the experiments stopped after the Germans were defeated in World War II, but the terrifying torture of children by Nazis continued on into the 1990s. One of the victims of the torturous experiments is still alive.

Eva Mozes Kor and her twin sister Miriam were brought to Auschwitz as young children and the Nazi officers charged with sorting the new arrivals took a special interest in twins. Eva describes being brought to the concentration camp and a Nazi asking her mother if she and her sister were twins. Her mother asked if it was a good thing that they were twins and the Nazi said yes, so Eva's mother told him they were. Eva and her twin sister were immediately separated without as much as a goodbye as they cried.

"The cattle car door’s opened. We heard a lot of Germans yelling orders. My mother’s holding on to Miriam and me. My father’s standing right by us, with my two older sisters," Eva recalled in an interview with Buzzfeed. "Very unfriendly sight. Everything seemed to be dark gray. Tall, barbed wire. Strange. Very, very, menacing looking. I said to myself, ‘If ever there was a hell on earth, this must be it.’ My father and two older sisters disappeared into the crowd. Thirty minutes after we stepped down, Miriam and I no longer had a family. We were all alone in this place where there was nowhere to turn for help." One of the sick experiments performed on twins was combining them into one person with surgery.

"There were scattered naked corpses of three children. Their bodies were shriveled and this is when I realized, at age ten, that that could happen to Miriam and me also; unless I did something to prevent it," Eva continued. "Why didn’t they do something to stay alive? I will not let that happen to Miriam and me. The only thing I could think of was: I was going to make a silent pledge that I am going to do everything in my power to not end up like them on the latrine floor."

"We knew within the first week probably, that he murdered our families," Eva said. "We also knew we were alive only because he wanted us alive and as long as he wanted us alive." The Nazi's experimenters were fascinated with twins and performed unimaginable experiments upon them such as torturing one with extreme pain to see if the other would feel it. "Doctor injected us three times a week with all kinds of germs and drugs and chemicals," Eva said. "After one of those injections, I became unbelievably sick. So next morning, Dr. Mengele came in with four other doctors, and he said, ‘She only has two weeks to live.’ I refused to accept his verdict."

Related coverage: <a href="https://thegoldwater.com/news/26475-Erdogan-57-Muslim-Countries-To-Unite-Against-The-Nazis-Of-Israel">Erdogan: 57 Muslim Countries To Unite Against The ‘Nazis’ Of Israel</a>

Eva floated in and out of consciousness for the next two weeks and would often wake up on the floor and try to crawl to a water faucet but never made it before losing consciousness again. "I actually made a pledge that I refused to die, and I would do anything in my power to prove Dr. Mengele wrong; to survive, and to be reunited with my sister. Would I have died, she would have been rushed to Mengele’s lab and killed," she said. "But I spoiled their experiment. I survived." Eva endured the experiments for nine months before she and her sister were liberated by Russian troops.

Eva describes being trapped in her own mind even after being liberated from Auschwitz due to the extreme bitterness and unforgiveness she held within her. "If anybody asks me if I was angry with God, I was angry with everything, of God, the world, and everybody." It wouldn't be until the 50th anniversary of the liberation of Auschwitz that Eva would find it within herself to forgive her tormentors.

"As I was standing by the ruins of the gas chamber I was remembering all the people I was forgiving. I was forgiving the Nazis. I was forgiving Mengele. I was forgiving the people that did the experiments," Eva said. "I was forgiving everybody because of the fact that I have the power to forgive. It gave me an emotional freedom that was so exhilarating, so beneficial to me, that I did not have to deal with who did what to me and why. Immediately, I felt that all the pain I was carrying on my little shoulders were lifted from me; that I was free. I was no longer a prisoner from my tragic past."

Eva's sister Miriam died of cancer in the 90's but Eva is alive today. "God has a power to forgive, to forgive us, and forgive other people," she said. "I have personally experienced the act of forgiveness that gave me my emotional freedom. No human being can be free: emotionally free, and mentally free, without forgiving people who have wronged them."

While the liberation of Auswitch was the end of the experiments on Eva, it was not the end of child experimentation by Nazis. After World War II, hundreds of high-ranking German Nazis fled Europe to South America. Among them was a monster of a human being named Paul Schafer. Schafer grew up in Germany and joined the Hitler Youth movement at an early age before serving as a Corporal in the German army. When the Germans were defeated, Schafer fled to Chile where he joined up with other Nazi fugitives to create "Colonia Dignidad" or the "Dignity Colony".

Colonia Dignidad is as if someone took a slice of Nazi Germany from the 1940's and transplanted it in Chile. The colony of Germans coexists with locals and the descendants of the high-ranking Nazi's still have their father's and grandfather's war medals and Waffen SS insignias which they hold as cherished memorials. But Colonia Dignidad was more than just a colony of Nazis, it was a cult. Schafer bribed the local government who allowed him to run his compound separately from the rest of the country and its laws. He used wealth accumulated during World War II which included filings from the teeth of Jews they killed, according to U.S. Army Special Forces veteran Tim Kennedy.

Schafer ran a strict compound that even fired shots at a journalist who approached its gates one day. Nobody was allowed to leave. Schafer ran the compound under the guise of being a humanitarian society called Dignidad Beneficent society which claimed to help young children. In reality, children were held captive at the compound, divided by age and sex, and used for forced labor, illegal experiments, and sexual abuse. One local Chilean boy was used to test what the human body could survive. He was thrown off a building and then allowed to heal before being lit on fire and then being nursed back to health again. This process repeated for years until the young boy made his escape.

That is just one example of the horrific abuses the former Nazi inflicted on children within his own private Nazi cult within an isolated pocket of German descendants in Chile. Victims of Schafer's sexual abuse were mostly boys, but some girls also had cattle prods inserted in their vaginas and electrocuted until they were sterilized. Every now and then a victim would escape the compound and run to local authorities, but they were paid off by Schafer and immediately brought back to him. The local Chilean secret police also used Schafer's compound to torture and extract information from political opponents.

It wasn't until 1997 that 26 children came forward at once to report that they had been sexually abused at the compound ran by Schafer. He quickly disappeared and fled from the Chilean government who sought to finally prosecute him under a newly elected leader. Schafer was tried in his absence and found guilty in late 2004. Colonia Dignidad still exists today with the descendants of Nazi war criminals still living there. Even in 2018, these many Nazi descendants only speak German despite living in Chile. Schafer finally resurfaced in 2006 and was sentenced to 33 years in jail for sexually abusing 25 children. He was found guilty of 20 counts of dishonest abuses and five counts of child rape, and those are just for crimes he committed between 1993 and 1997. Schafer died in 2010 of heart failure at the Santiago de Chile's Ex-Penitentiary's Hospital.

Kys Kyle. The holocaust is a hoax but it shouldn't have been; Hitler did nothing wrong

Yeah just like how they had the peddle powered brain bashing machine, or the Holocoaster that dumped people into ovens, or the dogs trained to rip children from pregnant girls wombs, or the pool they used to drown jews in by forcing them to swim till exhaustion

Lol this holocaust bs is as childish as the lie about a bunch of dune coons pulling off 9/11 wtc attacks. We all know it's kikes, kikes, n more kikes!!

OOOOOOYYYY VEEEEEY. YOU KNOW MUH GRANDPA WAS 3 WHEN THEY GASSED HIM? AND TRUE STORY, ANOTHER POOR WOMAN WAS ABOUT TO BE GASSED BUT THEY RAN OUT OF IT, MAKES SENSE SINCE IT ESCAPED OUT OF THE WOODEN DOORS.

Its frighteningly chilly. I cant say anything without feeling the emotions, I hope no one has to go through what she did ever again.

Forgiveness: The mind can become so confused and programmed that it is actually responding like a robot, so it's not his or her fault. This is what many people go through: they let go of their robotic side and become humble and loving towards one another, through forgiveness. People who are aware of their actions and words do things with intent and never project hate towards any other living being.. cBenArion

Why is only Joseph Melange? BC he was caught in the 80s amidst media firestorm of Nazi hunting promoting angle of deth

My Father in the US Army 26th (Yankee) Division at the time was in a company that liberated 2 of the camps (not Auschwitz I, II or III) but the Gusen and Passau concentration camps.

NOTE: Josef Mengele during his brief but infamous tenure at the concentration camp was only 1 of 35 plus physicians at Auschwitz I & II . He was NOT the highest-ranking physician at the camp, that would have been SS captain Dr. Eduard Wirths, as garrison physician. Dr. Wirths responsible in all medical matters for the entire camp complex.

Josef Mengele came to Auschwitz around May 1943. He was the medical officer at the SubCamp called Birkenau aka “Gypsy camp”. Which eliminated all of it prisoners in a few months.

Josef Mengele was then moved to a new position as Chief Camp Physician of Auschwitz II (i.e., Birkenau), in November 1943, still under Wirths' jurisdiction. Auschwitz was liberated January 27, 1945 by the USSR Army …. they only found a few 1000 still barely still left alive .

So based on official records, Josef Mengele only served as the Angle of Death about 1 year 2 months out of the 5 years that Auschwitz I, II & III existed.

But while far from innocent, his name is held to blame for the whole 5 years, 4 which he was NOT there.