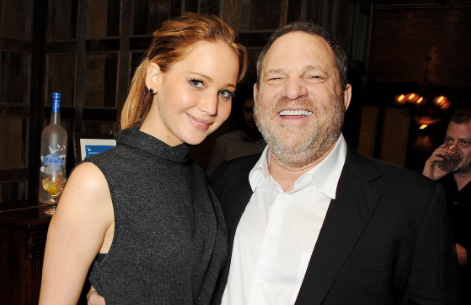 Earlier this week, a lawsuit claimed that Harvey Weinstein slept with actress Jennifer Lawrence in order to ‘help’ her career, a rumor she immediately slammed as ‘fake.’

In the suit, it is written that Weinstein bragged: “I slept with Jennifer Lawrence and look where she is.”

Jennifer Lawrence responded by saying: "This is yet another example of the predatory tactics and lies that he engaged in to lure countless women"

In France however, the Hollywood producer’s driver during the Cannes film festival has written a book about his escapades in Europe, where he was a bit more ‘relaxed’ about his nature than back in the US where the press is everywhere.

The details are stunning and one story, in particular, seems to point to an ‘unknown actress who two years later won an Oscar.’

“I had to juggle two schedules: there was the official timetable that The Weinstein Company had drawn up in New York, and an "other agenda" as Weinstein himself described it. Every night he turned to host girls in his suite at the Majestic or in his office on the top floor of the Gray d'Albion, and he organized fake casts with top models or call girls and curious young girls with a strong stomach.”

“The Weinstein couple are the guests of honor at a chic private party organized by Brad Pitt, one of the receptions organized in the villa Saint-Georges, where the absolute beau monde is expected. I install myself comfortably in my limousine when Harvey sends me a message: I have to park the car a few meters away, in a quiet place where casual passers-by would never come.”

“He comes over and sits in the back seat with his companion, apparently an English speaking model or actress. She is slightly tipsy and giggles nervously, making quite the impression on him.”

“I start the car and think about where I can take them. But when I look into the rear-view mirror, I can see how bewildered they are. They are kissing and Harvey starts to have sex with her. Unbelievable: his wife Georgina his at less than a mile from here with the other guests at the party.

“Suddenly it goes wrong in the back seat. The model has changed her mind or refuses what Harvey wants from her. She screams, she beats the steamed windows, she jumps as if she wants to escape the claws of the predator. But nothing can stop Harvey. He pushes her face into the cold leather seats and pushes his fingers roughly into her flesh. He bites her buttocks, tears her panties to pieces and becomes wild. Is he trying to rape her now, or am I mistaken?”

Harvey Weinstein: ‘I slept with Jennifer Lawrence and look where she is’ https://t.co/z7lvBylC5C pic.twitter.com/vUpfGAmuEs

“I do not know what to do. Suddenly the door opens and the girl jumps out. She looks pale, and while she is holding her pumps and her tiny Chanel handbag in one hand, she tries to put her minuscule dress back in order with the other hand. In the meantime, she rages against him: 'Big fat pig! Mean sadist! I hope you at least keep your promise!"

'Come back! You can audition! I give you the role, promised! "

“His silver-plated attaché case is half-open in the back seat. I can not look at it: it is full of sex toys and accessories, and boxes of pills and tablets. He had always claimed that there were official documents in it and his credit cards. Instead, I see champagne glasses, dirty handkerchiefs, used condoms, and traces of what must have been cocaine.”

“I try to get a little more order in the car when I see him coming back. Funnily enough, the woman is with him. They have both calmed down. When they are in the backseat, Harvey whispers, "Drive us to my office." Then he turns to the girl: "Do not worry, I explained to you that everything was neatly poured into a type contract. They are at my desk, it's only ten minutes away. The casting is done entirely according to the rules, otherwise, there are no recordings. You just have to be aware of what the director wants and be a bit accommodating.”

“The actress must have been drugged. Who gets it into his head to do casting at the office of Harvey Weinstein at this night time? But it has to be said: the monster always kept his promises.”

“When I watched the Oscars two years later, I recognized the actress who had been sitting with him in the backseat of my limo. Now she was the heroine in a major Hollywood blockbuster, and she got an Oscar and overwhelming applause.”

Hollywood
A symbol of the decline of the West no less.
No more movies for me.

Not surprising given the fact that she has given us examples of her verbal stupidity. It could possibly have happened but she will probably never accept it, nor will we be able to know the exact truth.

ALL THIS GARBAGE IS A DISTRACTION FROM THE TRUE CRIMES THEY HAVE ALL BEEN INVOLVED IN. IT AIN'T JUST THIS GIVE AND TAKE FAVORS FOR FAVORS CRAP. IT'S MUST BIGGER AND MUCH WORSE. VILE

the bitches are all whores and Weinstein an UGLY, UNSHAVEN, REVOLTING, FAT JEW with no sense of shame.