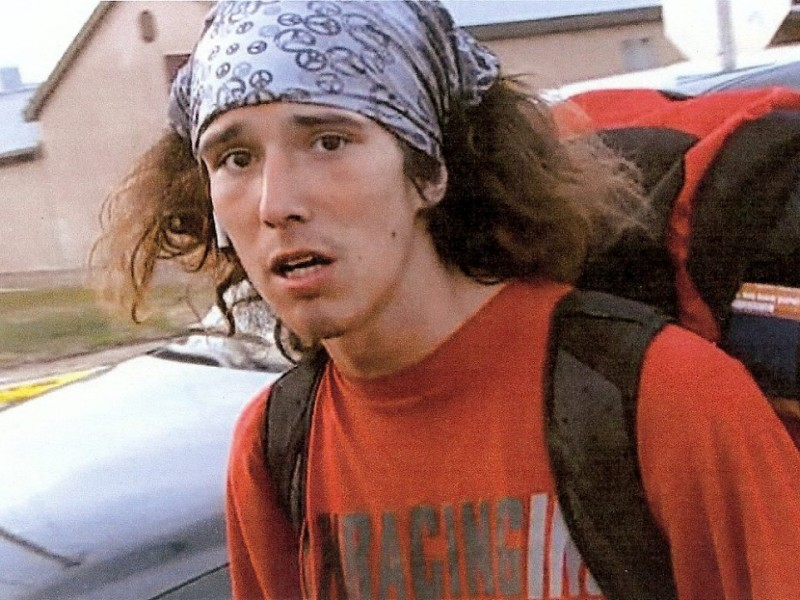 Thanks to details and crime scene photos shared within a motion filed by Kai the Hitchhiker, Caleb McGillvary, new details related to the farce of an investigation have been revealed. The motion to dismiss indictment based upon spoliation of evidence or in the alternative, motion for issue preclusion and reduction of charges, and motion for designated facts to be taken as established or, in the alternative motion for adverse inference was filed this month, but the judge is claiming that it wasn't completed in time and will not be heard in court. It's been several years without a trial so far, but with every passing month, Kai and those who support him have been diligently building a defense by pointing out glaring errors related to the investigation and prosecution.

The document, shared at the Kai the Hitchhiker Legal Support Page at Facebook, runs nearly two dozen pages, including the table of contents, list of over 20 precedent cases cited and 6 New Jersey statutes. As laid out in the procedural history and statement of facts, motion for a change of venue had already been denied as well as an initial motion to dismiss from March of 2017 which was denied.

As we've reported here before, Caleb McGillvary, better known as Kai the Hitchhiker, was picked up by Union County attorney, Joseph Galfy, Jr. It was revealed through Discovery procedure that Galfy subscribed to various pornographic websites and online homosexual dating sites and had the number of several young men along with that of some of the legal authorities who would initially take part in trying the case.

Latest Developments In The Case Of Kai The Hitchhiker

Evidence at the scene, including hairs, urine and blood, corroborate Kai's story that he was held down and raped and had to fight his way out. In New Jersey, lethal force is authorized to fend off a sexual assault. Despite, blood and semen found on Galfy's penis and Kai reporting that he was sexually assaulted, the only rape kit performed was on the Decedent.

Surveillance video also led to the claim of Union County investigators that Kai cut his hair to elude escape was incorrect. The State apparently deleted the video and still photos, just another case of obstruction of evidence and spoliation of exculpatory data on the part of the Union County Police Department.

UCPO detective Robert B. Henderson instructed investigators in what to gather as evidence and what to discard. Many items that investigators had photographed as potential evidence were deemed unimportant to collect for evidence. While gathering evidence of potential sexual assault, they only collected the "clean and orderly" bed linens rather than fibers from the carpet that visibly contained urine and hairs. This again corroborates Kai's story that he was held down, not assaulted on the bed.

Napkins in the shape of a funnel next to pill bottles. It was noted in the investigators' notes that at some point the dishwasher was apparently run, washing out the bottles and glasses that would have likely contained drug residue. No analysis for drug residue of any type was done.

YouTuber WavyWebSurf Retracts Erroneous Video About Kai The Hitchhiker
For that matter, despite saying that the dishwasher had been run, there appeared to be food drippings on the plates still. Regardless, due to the claim that someone had washed potential evidence they were not collected. Union County Police even allowed James Galfy, formerly a local police chief and the alleged rapist's brother, was allowed to enter the residence before the investigation had been completed.

In addition to this, all bottles and glasses were fingerprinted and then washed out. The bait and switch involving the bed sheets and washing out evidence are bad enough, but then there's "Dr." Robert Pandina who claimed that Kai couldn't have been administered a date rape drug because effects would have lasted 8 to 10 hours. Apparently this "doctor" wasn't aware that, as we've mentioned in recent coverage of the Ed Buck case, GHB is incredibly difficult to detect due to it being present in some quantity as an endogenous compound. GHB, also considered a potential "date rape drug" has a short half-life of 30 to 60 minutes.

To boot, "Doctor" Robert Pandina isn't even licensed to practice medicine in New Jersey which means at this point investigation and prosecution have felony criminal impersonation to add to the list along with spoliation of evidence and general obstruction of justice, not to mention failing to abide by New Jersey Attorney General Standards for providing services to victims of sexual assault.

The latest motion points out how previous motion to dismiss was due to issues related to semen not being found on the bedding, no hairs being found and the fact that Kai "couldn't have been drugged" due to misinformation added to the record by "expert doctor" Robert Pandina.

So not only were the crimes committed against Kai not properly investigated but in the investigation of Galfy's death, evidence that could exonerate Kai was deliberately destroyed. Luckily, the job was sloppy enough to leave tracks.

When you consider the somewhat incestuous relationship occurring between prosecutors, investigators and the decedent in the case it's not hard to guess why the investigation and prosecution have been a travesty throughout.

The former prosecutor of the case "resigned" after 11 years, shortly after the news broke that he was good friends with the deceased.

“Donohue said Mega has recused himself from the case, but he understood the defendant’s concern about the other judges.”

Adding insult to injury is the fact that for over 5 years now, Kai has been locked away, nearly every day of that stretch in solitary confinement. Only in the past few months was he given a chance to leave the cell for more than an hour a day and associate with other inmates. The right to a fair and speedy trial is found right in our Bill of Rights and extended solitary confinement, especially when it's not related to any specific behavioral issue or related to protective custody is considered to be cruel and inhuman punishment and can have long-term negative effects on physical and psychological health.


To Get Away With Murder In LA: Another Dead Man In Ed Buck's House

There was definitely a mass of crimes committed here, but the State itself seems liable and complicit in most of them.
Share this article

this kid is like totally screwed-up in the head, dude...

👆Worst comment ever. Did this person even read the article? The state was friends with a rapist and covered it up. I would say, "Our Justice system is totalled screwed up, dude."

It's really trippy seeing all this evidence that points to Kai being 100 percent innocent. In the begging when Kai first got locked up; I felt the mainstream media had many inconsistencies and they were twisting thing's which shows they were trying to cover up something. That is why in the begging got me to feel that the truth was on Kai's side. With all the information that is coming forth; it keeps showing more and more that the truth is on the side of Kai. I feel Kai will win this case. Prayers are still needed. You have a blessed day.

Ive been keeping up with this case. . This dude is innocent and has a good heart. Free him ! Asap. Hes done too much time for defending himself.

The first comment was typed out by one of those trying to set-up Kai that is friends with the jury..

Actually, "Kai" (real name Caleb) tried to assault an elderly woman at my music studio, a few months before he went to NJ. The dude was and is a total psychopath.

^^haha, the funniest thing about the dude above is how apparently the dude NEVER mentioned this supposed "assault" until AFTER Kai had been arrested. srsly though, instead of making up stories after the fact for whatever reason, why don't you point out what makes sense about that whole story. even if he WAS a "psychopath" like you say, more and more evidence is still coming out that confirms the story that he WAS raped and there is absolutely no doubt that the scene was tampered with.

refusing to do a rape kit on a victim of assault is a felony in NJ. they WASHED OUT the bottles and mugs that Kai said were drugged. All this is in the investigators notes, if you'd bother to read instead of making stuff up. and riddle me this... WHY was blood and semen found on the deceased's penis? if he WAS lying they should have tested the bottles and done a rape kit instead of ignoring his request and washing out the bottles. Tampering with evidence, denying rights of a victim of sexual assault to have a rape kit done, ignoring the blood and semen on the rapist's penis.

Come on dude, seriously, instead of making up stories, why don't you explain away all that.

This is such a sad story, we the people need to stand up and fight for this mans rights as a human and citizen of this country. We sit here and pass judgement without reason or concern. This man was railroaded just like 100s of people everyday in this country. This man Caleb was a pure victim and he did nothing but defend himself against this rape. If we look at the facts and we look at the actual reasoning or motive you would see the truth. This man deserves to be heard, his story needs attention and its sad because if this was someone famous or very wealthy he would be getting the attention needed for his case to be heard. He is not guilty

Thank you for all the information. This is so crazy and cruel on Kai. How can it be so difficult to see how wrong this is??
Please get them to act Now!!