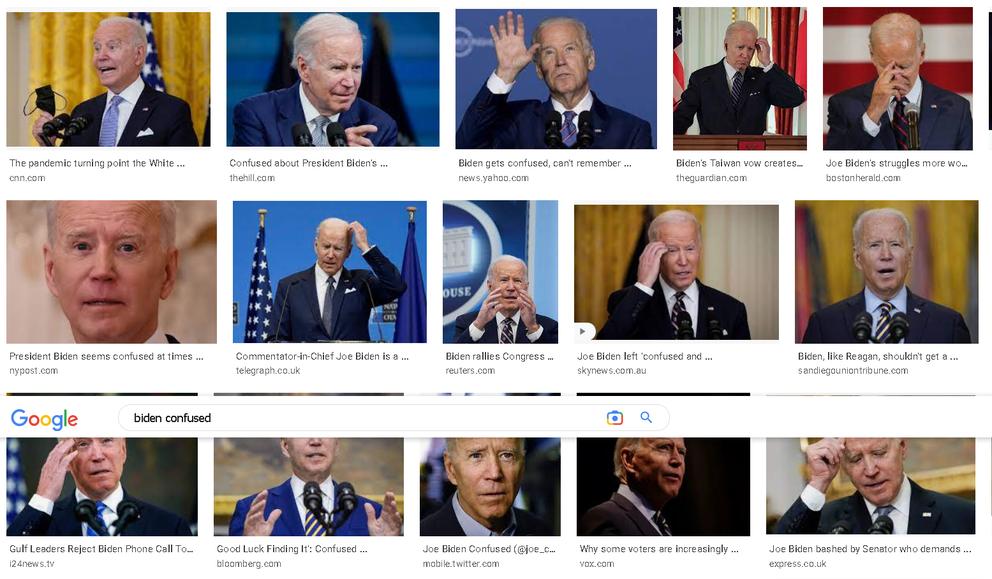 I am not saying this to be mean. I am not being sarcastic, or glib. Joe Biden has a history of bald faced lies and bad policies going back decades, but at least when he was Vice President under Obama he could speak without slurring or forgetting what he was saying in the middle of a sentence. It may not be dementia or Alzheimer's but it is some sort of cognitive decline, likely age related and even in the time since the campaign to here near the midterms it has gotten worse.

Not that the alternative is much better. Our Vice President is a meaningless platitude, empty discourse and non sequitur truism machine on camera and the speaker of the house herself can barely string three words together without a slur. It's a frightening thought on the one hand, almost comfortingly though you can bet that those highly placed elected officials are not the ones steering the platforms and policies of our government. That's been up to the lobbyists, think tanks and policy institutes for years anyway.

This is part I in a three part series, the majority of these clips are recent from this or last year. Part two will be more of the evidence that our president is seriously addled by advanced age. It's ironic that past the era of "Ok, boomer" and "no more old, white men leaders" liberals would elect the oldest (and perhaps whitest) of men.

Biden is a segregationist who said he didn't want his children to live in a "racial jungle." Even after segregationist he supported segregationist policies and bragged that he would do well campaigning in the south as "Delaware was a slave state." Not surprising from the author of the crime bill supported by Hillary Clinton during her speech in the 90s characterizing black teens as "super predators."

I am making $358/hour telecommuting. I never imagined that it was honest to goodness yet my closest companion is earning $52 thousand a month by working on the web, that was truly shocking for me, she prescribed me to attempt it simply , COPY AND OPEN THIS SITE________𝐬𝐚𝐥𝐚𝐫𝐲𝐭𝐨.𝐜𝐨𝐦

I’m making over $17k a month working part time. I kept hearing other people tell me how much money they can make online so I decided to look into it. Well, it was all true and has totally changed my life.

This is where i started…>>> 𝗪𝘄𝘄.𝗪𝗼𝗿𝗸𝗦𝗶𝘁𝗲𝟮𝟰.𝗖𝗼𝗺

Full easy and very simple online money earning job to make dollars online. from this job I have made $64296 in just 4 months. I just gave this work my spare time after my whole busy day because I am a student and this job changes my life completely. so simple work no special skills required for this job. get this by following instructions on this page→→→→www.web.slate74.com

I get paid more than 💰$100 to 💰$700 per HOUR for working online. I heard about this job 3 months ago and after joining this I have earned easily 💰$35000 from this...A. without having online working skills .. Simply give it a shot on the accompanying site…

I work from home and earn a respectable $60k a week, which is amazing considering that a year ago I was unemployed in a terrible economy. I always give God praise for honouring me with these rules, and now it’s my duty to practise anticipatory compassion and share it with everyone. Likewise, GOOD LUCK.
Here is I begun.… … ……>>𝐰𝐰𝐰.𝐝𝐨𝐥𝐥𝐚𝐫𝐬𝟏𝟏.𝐜𝐨𝐦