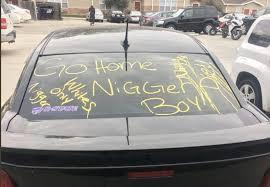 Once again an attempt to smear White Americans is proven to be nothing more than a false flag attempt from an Anti-White Black male who tried to play the race card and the victim card when it turns out he's responsible for the very crime he claims to have been the victim of.

21-year-old Dauntarius Williams contacted the Riley County Police Department to report that his car had been vandalized by what he claimed was a White supremacist who covered his vehicle with derogatory and racist slang.

The incident occurred outside of Manhattan where the black man who claimed he was a victim of the hate crime contacted authorities who were sent to his home on the 2200 block of Claflin Road.

The <a href="http://cjonline.com/news/local/2017-11-01/riley-county-police-car-manhattan-defaced-racist-graffiti-threat">local news media </a>had a field day in their push for ratings to report that a black man in New York was a victim of evil white supremacists, even going as far as the Police Department offering a cash reward for information on the graffiti.

It turns out however that the victim himself was responsive for the crimes of drawing the fake swastikas and fake racism all over the car.

Dauntarius Williams issued a public apology for his actions saying the following:

<blockquote>“I would like to deeply apologize to the community. The whole situation got out of hand when it shouldn’t have even started. It was just a Halloween prank that got out of hand. I wish I could go back to that night but I can’t. I just want to apologize from the bottom of my heart for the pain and news I have brought you all.”</blockquote>

Riley County Police Director Brad Schoen and the Riley County Attorney Barry Wilkerson has said that since he issued an apology they won't be pursuing charges against the man who faked this entire incident.

That's the real problem here, because now taxpayers have to foot the bill for this Anti-White and his fake hate crime which cost police and investigators man-hours trying to solve the case.

The Federal Bureau of Investigation even joined in on the case agree it was first reported on November 1st to investigate it as a hate crime.

Not only this but it's embarrassed local media and also set back race relations in a community in which the problems were nonexistent.

Dauntarius Williams deserves to be charged, fined, forced to pay restitution if not incarcerated for this heinous Anti-White action.

Prominent African-American Conservative, who's often an outspoken and much-needed voice to counter what seems to be a disturbing trend of ignorance in the black community, <a href="https://www.waynedupree.com/man-vandalizes-car-racist-slurs-guess-no-charges/">Wayne Dupree </a>tore into Williams and the Police for failing to press charges on him over the incident.

“Looking at the vehicle, if someone were to write all that on a car, you would have to have some severe hate inside your heart to do that to someone,” Dupree said.

Dupree went on, “This incident happened close to the Kansas State University school so you can only imagine if this had turned into a full-scale problem.”