"Birds Aren't Real Movement Calls Newsweek's Story 'Blasphemous' Vows to Uncover 'Avian Genocide'" reads the headline from late March of this year. Ok, fine Newsweek, we get it. You want to sell ad space, just like these guys wanna sell tshirts, but I have more respect for the satirist than the "journalists" who bite the bait. Check out the story from one "bird truther" in Memphis, Tennessee who managed a local news spot after erecting a giant "Birds Aren't Real" billboard in the city that birthed the blues. Sadly, one of the worst things about the social media era is how it has affected headlines and the type and tone of news stories. Since print media has practically died it's a battle for clicks and clickbait always wins in that fight.

Unless that is, birds are in fact secretly government surveillance drones. Learn more and join the "bird truther" movement at http://www.birdsarentreal.com

You stupid fucking piece of shit.

That billboard has been on Highland Street and Southern Avenue forever...

It's right next to WHBQ and Brother Juniper's...

You stupid fucking piece of shit.

Brother Juniper's has THE BEST BREAKFAST ON EARTH... 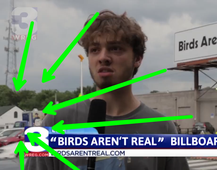 They don't have anything like Brother Junipers in McMinnville...