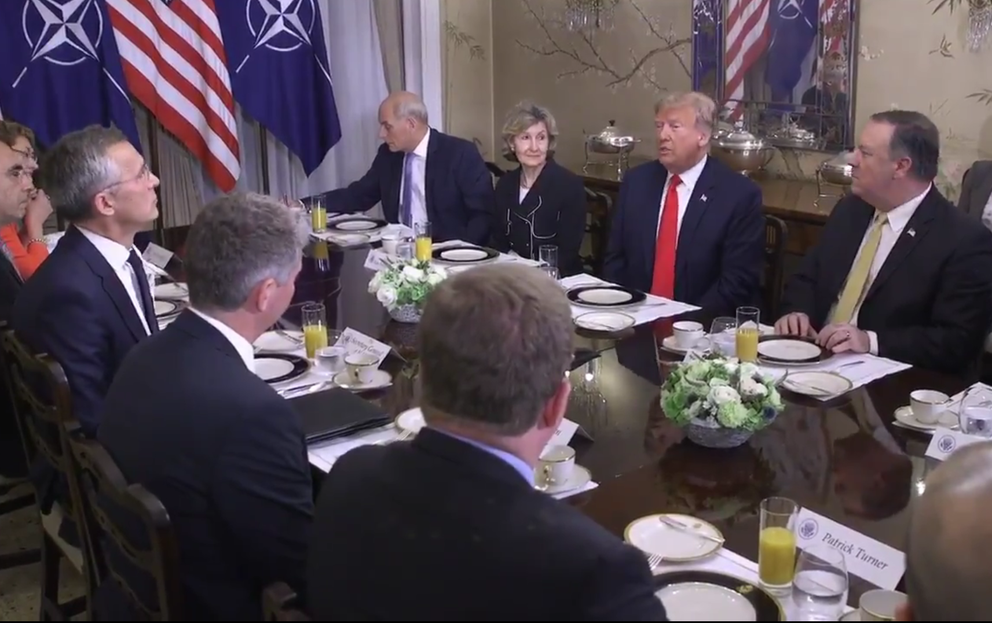 US President Donald Trump immediately set the tone for his two-day meetings at NATO headquarters in Brussels, Belgium as he slammed Germany’s pipeline deal with Russia during a breakfast meeting with NATO Secretary General Mr Jens Stoltenberg.

POTUS sat with US ambassador to NATO Ms Kay Bailey Hutchison to his right and White House Chief of Staff Mr John Kelly to her right.

At the left of the US President, you can see Secretary of State Mr Mike Pompeo, Defense Secretary Mr James Mattis and National Security Advisor Mr John Bolton.

The US President wasted no time and immediately slammed the military alliance for not spending enough on defense, as agreed in the NATO charter.

According to the US President, a number of very “inappropriate” oil and gas deals with Russia had given the Kremlin leverage. He stated: “Germany is totally controlled by Russia … They will be getting between 60 and 70 percent of their energy from Russia and a new pipeline, and you tell me if that is appropriate because I think it’s not.”

“I think it is a very bad thing for NATO and I don’t think it should have happened and I think we have to talk to Germany about it. On top of that, Germany is just paying a little bit over 1 percent (on defense) … And I think that is inappropriate also.”

Of course, his NATO allies had been warned beforehand that Mr Trump would be once again addressing the issue. Even though European defense spending is up ever since their last meeting in May of last year, the US President insisted yesterday still before leaving that they need to do more. Upon boarding Air Force One, he said: “Many countries in NATO, which we are expected to defend, are not only short of their current commitment of 2% (which is low), but are also delinquent for many years in payments that have not been made. Will they reimburse the U.S.?”

<blockquote class="twitter-tweet" data-lang="en"><p lang="en" dir="ltr">Trump slamming Germany at breakfast with Stoltenberg: &quot;Germany is totally controlled by Russia&quot;<br><br>&quot;Germany is a rich country…well they could increase [defense spending] immediately tomorrow and have no problem.&quot;<br><br>&quot;We&#39;re not going to put up with it, it&#39;s inappropriate.&quot;</p>&mdash; Meridith McGraw (@meridithmcgraw) <a href="https://twitter.com/meridithmcgraw/status/1016945623222890496?ref_src=twsrc%5Etfw">July 11, 2018</a></blockquote>

NATO Secretary General Mr Stoltenberg, clearly taken aback by the words of Mr Trump, claimed the issue would certainly be discussed. He stated: “First of all it is great to see you again, Mr President. We are going to discuss many important issues at the summit and one of them is defense spending and we all agree that we have to do more. I agree with you that allies have to do more.”

The European press is immediately warned what to expect for the next two days.

I love Trump, he sticks it in NATO’s ass dry and sandy!! He needs to grab May by a tittie and call her a soft tart then, fart by Macron and yell out “Oh what, somebody step on a duck?”

Doing exactly what i want him to do.

How long until he calls Merkel a nazi and gets kicked out for good?

He should be even harder with Germany honestly, they're making bank by not only ruling Fourth Reich Econonic Union but also can afford to spend ridiculous amounts of wealth on the neo-leninist project they've got going on. The tighter the economy the better for the German people, nearly all surplus goes to agendas against them.

Please tell me that youre heading to keep this up! Its so excellent and so important. I cant wait to read much more from you. I just feel like you know so much and know how to make people listen to what you have to say. This blog is just also cool to be missed. Great things, really. Please, PLEASE keep it up!
[url=https://canadagoose.ttravelmint.com]canada goose langford parka[/url]