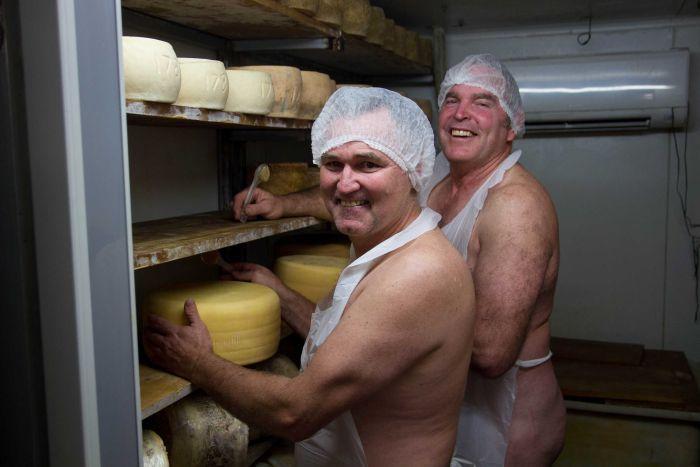 You can't really blame the gay farmers who are stripping naked at work to raise awareness for mental health when you see a new star every week baring it all for a cause like animal furs. Two farmers named Paul and Kerry Wilson were hesitant at first thinking they didn't have the right body type. "Gee whiz, I'm 56. Does it matter?" Kerry asked. The cause they are seeking to raise awareness for is the mental health of Australian farmers.

Kerry and Paul have been farming just like the five generations of family before them and work together on a farm in the northern rivers of New South Wales. "You carry a lot of guilt thereafter and even before, the 35 years before that when you know that something's not quite right in your head, but you can't quite work it out. Or you're not quite game to go and work through it with anybody. So we've had our fair share of ups and downs and the agricultural industry is a tough gig."

Kerry added that coming out in the Dairy industry was especially difficult. "Oh, it was horrible," he said. "At one stage we thought, OK, we'll just go to Brisbane and start a new life in the city, an anonymous life. But it was a fleeting thought. It wasn't an option because I had three sons." When they considered moving the kids were aged nine, six, and four. "And they by default had to come on the journey with us," Kerry explained. Life continued for Kerry who's former wife supported him.

"I don't remember ever sitting around with my head in my hands going, 'Oh God, what are we going to do?'" Paul said. It turns out they weren't even the only gays in the village. Despite graying hairs and bodies riddled by time, the couple hoped that going naked would show others that they don't have to be ashamed. "If there's normal, average, mainstream people out there that happen to be gay, and some kid in the bush sees that person or that couple and thinks, 'Oh yeah, that's me,' then we've done our job," Paul said.

WHY the "little exposure" was it a nationwide dating advertisement?

Sperm and ass drool flavored cheese. Just what we need

WTF did i just read

Yea they need mental health alright and for the one guy to mention God is pathetic. Gays are a abomination to God and will have their place in the lake of fire. Just look at Sodom and Gomorrah, yes they have been found by the dead sea. There's 5 cities that have been turned completely to ash! Their covered in sulfur balls {brimstone} look it up! Look up Ron Wyatt and his amazing discoveries.

>>31041 Damnit, Jim, let me have returns in my comments. You just made vertical posting impossible.

Cheese & perversion …no thank you.