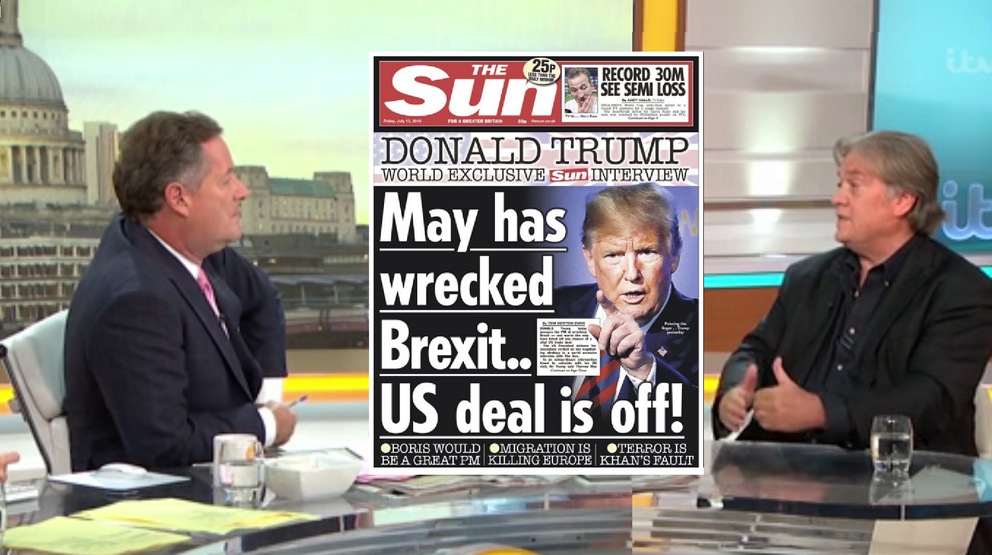 With the British part of the US’s First Couple’s European visit in full swing, many daytime shows were keen to shed some light on US President Donald Trump’s comments that the current Brexit plan which UK PM May presented earlier this week, and which led to the resignation of Foreign Minister Mr Boris Johnson, was not the type of Brexit “they voted for.”

In fact, Mr Trump, during his final press conference of the Nato summit, stated “the people voted to break it up so I imagine that is what they would do, but maybe they’re taking a different route. I’m not sure that’s what they voted for.”

In an exclusive interview on Mr Piers Morgan’s show Good Morning Britain, the former chief strategist of the White House, Mr Steve Bannon, was therefore asked what he made of Mr Trump’s comments about the upcoming Brexit deal between the UK and the EU and about his interview with the British tabloid The Sun in which he repeated those words.

Referring to the first visit of the UK Prime Minister still back in 2017, Mr Bannon replied: “When Prime Minister May and her team came over early on, he gave her some advice, overall advice how to get out of the EU. In addition we had a preliminary discussion to talk to them about a free trade deal.”

When Mr Morgan inquired about how US President Donald Trump feels about the current plan at hand, which he now seems to dismiss as ‘not what the people voted for’, the former White House Chief Strategist said: “I think once again, you see the corporate influence in the City of London that have wanted to slow-walk this thing from day one they do not want Brexit, they particularly do not want hard Brexit.”

“It's not just the American deal you will lose out on and I think that's where Boris Johnson was saying Trump will go in bloody hard on this - the question will have to be for the sovereignty for the British courts for the whole thing that people voted for – is this what people voted for two years ago? Didn't they vote to leave the EU?”

“Now you're kind of half in and half out and you're controlled by all the EU economic policies and that's what makes it very hard not just for the US but for China and other people that want to cut deals they're really gonna have to cut a deal with the EU.”

YOUR NEWS CONFERENCE WAS GREAT! GO FOR EVEN GREATER!

h t t p s: // w w w. you t u b e. com/watch?v=8 m AL 2 N q 9 q SQ here the two answer questions and the news if basically from those two..YET HOW THE MEDIA reports ..no wonder the world is a mess /media is not news media is listed as enterainment/ the video is from those two answering Questions before the media . the interview was not controlled by govs that also pay the media in each country to edit part and play parts for entertainment .. but not this vid interviews.