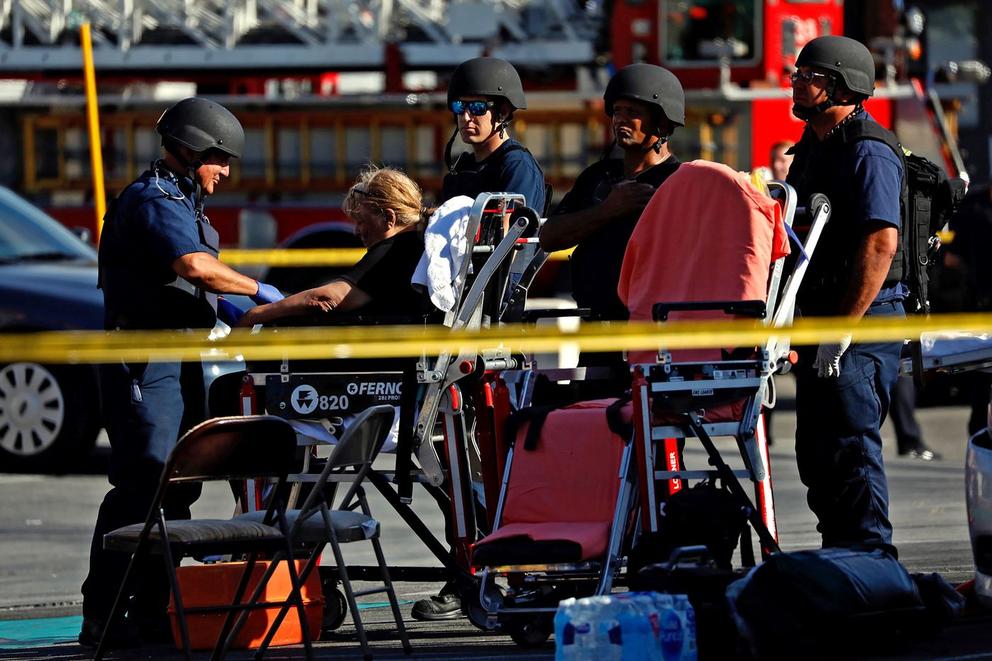 A gunman sparked a fierce shootout with police outside a Trader Joe's in Silver Lake, California Saturday evening. The gunman killed a woman and injured at least two others before surrendering to police. Mayor Eric Garcetti gave a press conference announcing the woman's death saying she was pulled out of the store by police but was declared dead at the scene.

Garcetti offered no further details and did not release the victim's identity citing law enforcement was still trying to reach the woman's next of kin. A law enforcement source told the Los Angeles Times that the deceased woman was an employee of Trader Joe's. The incident began as a family dispute in South Angeles where the unidentified gunman, 28, shot his grandmother at least seven times and injured another woman.

The shooter than dragged the second woman into his grandmother's Toyota Camry and fled the scene. The car was found in Hollywood thanks to transmissions from its anti-theft device, but when police attempted to make contact, the Camry fled. The shooter fired at police through his rear windshield before crashing into a light post outside the Trader Joe's.

The shooter exchanged more shots with police and was hit in his left arm before fleeing into Trader Joe's. The young woman who was an employee of Trader Joe's was hit by gunfire during the exchange between police and the suspect. People inside the store snuck out windows while the gunman allowed others to leave.

The Los Angeles Fire Department sent 18 ambulances and 100 firefighters to the scene, and a family reunification center was set up at the Northeast LAPD station. Los Angeles Police Chief Michel Moore said the grandmother of the gunman is in critical condition after surgery. Witnesses such as Don Kohles described the shooting saying, "The bullets were flying everywhere through the front of the store and across the parking lot."

Another witness named Elias Cueva said, "The tire exploded. When he couldn’t move the car, the police shot at him. I dove onto the floor." Another witness named Avo Kegeyan said, "Right when we heard the gunshots, we went down. We thought the shooter was in our parking lot shooting at us." The area of Silver Lake around Hyperion and Griffith Park Boulevard is still closed off, and the public is being asked to avoid the area.

what's THE IDENTITY of the shooter? no pic? no name? WTF?

Not only is this a travesty..Buy by the way what was the nationality of the shooter..

Not only is this a travesty..Buy by the way what was the nationality of the shooter..?

Thanks for taking the time to talk about this, I feel fervently about this and I take pleasure in learning about this topic. Please, as you gain information, please update this blog with more information. I have found it very useful.
[url=https://newbalance.artienatasha.com]new balance Clearance[/url]