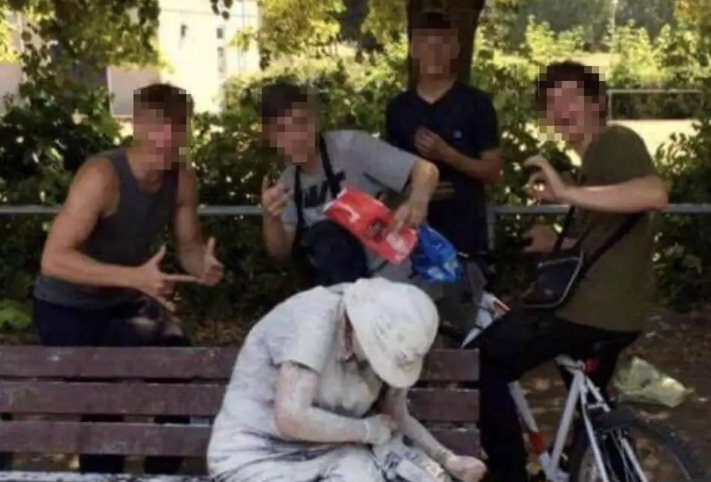 Four youngsters showered an elderly disabled woman with flour and eggs in a public park in Suffolk last week because she didn’t understand that it was ‘their bench’ she was sitting on. They then posted the pictures on social media for fun.

The UK press reacted in shock with many declaring that the youth have lost their way. Soon the youngsters, who cannot be named for legal reasons, received multiple death threats. They have now all been placed under police protection ‘for their own safety.’

In several social media posts, strangers made a string of threats against the young boys. Ever since the original photo was posted online (see above), and rumors of the boys’ identities swept online, a video telling the teens that they deserved to have their heads ‘ripped off’ was since viewed more than 3.1million times in Britain.

It was social media star Mr Robin Armstrong who started the story, posting the image to his 750,000 followers and declaring he would like the public’s help to ‘lead the way’ in finding the youths.

”You little f****g nothings have been over to an old woman with disabilities, poured water all over her head and then poured flour all over and stopped for a photograph.”

“That photographs says a thousand things – I don’t even have to say any words”.

An anonymous post on Twitter claimed that: “These five sick f*s live in Bury St Edmunds and think it’s funny to pour water over a old disabled woman’s head then cover her in flour let’s make these f***s Twitter stars.”

Locals in Suffolk are outraged that taxpayers’ money is now being spent to protect the criminals.

“My son’s name has been leaked over the internet and we’ve had threats. I reported the abuse to police and we’re under their protection.”

Death No, but good ass stomping I would support.