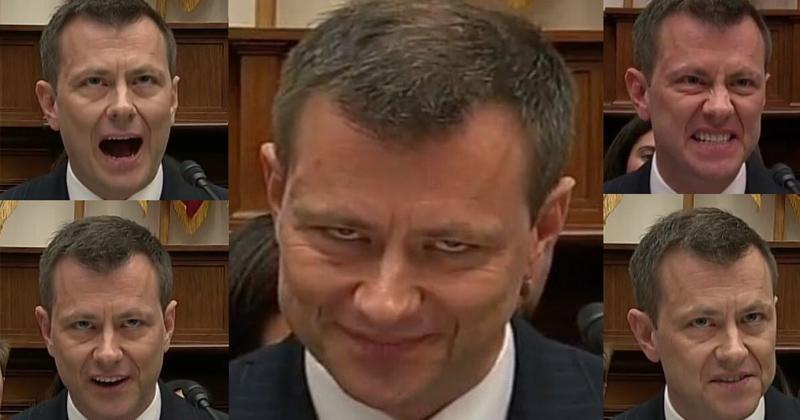 The Federal Bureau of Investigation has formally terminated embattled Special Agent Peter Strzok, who was once the number two in command of the Hillary Clinton email cover-up, and a prime example of the corruption which existed on Special Counsel Robert Mueller's team of witch hunters.

<blockquote class="twitter-tweet" data-lang="en"><p lang="en" dir="ltr">Just fired Agent Strzok, formerly of the FBI, was in charge of the Crooked Hillary Clinton sham investigation. It was a total fraud on the American public and should be properly redone!</p>&mdash; Donald J. Trump (@realDonaldTrump) <a href="https://twitter.com/realDonaldTrump/status/1029037282676957185?ref_src=twsrc%5Etfw">August 13, 2018</a></blockquote>

For more than two years now, the American people have watched as the FBI has embarrassed themselves to the point of losing almost all respect for the agency, followed by release after release of revealing text messages, documents, and truths of which show a desire from within the Bureau to have prevented then-Candidate Donald J. Trump from achieving the Presidency.

Even after his overwhelming victory in the 2016 elections, there existed a long-standing desire from Obama-era holdovers and biased agents to attempt to bring down the 45th President of the United States of America, in what was an unprecedented witch hunt against a sitting President, one that hasn't been seen in the nearly two and a half century history of this country.

Today, Trump supporters can finally see some vindication, once again proving that they were not only correct in their claims that a “Deep State” conspiracy against President Trump was unfolding in the United States of America's federal law enforcement agencies, but that several keynote players on that effort have since been stripped of their careers as a result.

Through uncertain times ahead, knowing that the Special Counsel in Robert Mueller continues to harvest the last remaining leftists anguish in a final plot to unseat the President, Americans still demand justice for the liberal elite who participated in the efforts to illegally order wiretaps and surveillance of the 2016 Republican candidate, and will never fully trust our government again until they see those responsible puts in handcuffs.

Peter Strzok’s attorney Aitan Goelman, issued a statement of which he's condemned the termination of the corrupt Special Agent as if to say that some type of injustice has occurred.

"The decision to fire Special Agent Strzok is not only a departure from typical Bureau practice but also contradicts (FBI) Director (Christopher) Wray's testimony to Congress and his assurances that the FBI intended to follow its regular process in this and all personnel matters," Goelman said in his statement.

<blockquote class="twitter-tweet" data-lang="en"><p lang="en" dir="ltr">Agent Peter Strzok was just fired from the FBI - finally. The list of bad players in the FBI &amp; DOJ gets longer &amp; longer. Based on the fact that Strzok was in charge of the Witch Hunt, will it be dropped? It is a total Hoax. No Collusion, No Obstruction - I just fight back!</p>&mdash; Donald J. Trump (@realDonaldTrump) <a href="https://twitter.com/realDonaldTrump/status/1029036065158557701?ref_src=twsrc%5Etfw">August 13, 2018</a></blockquote>

The Federal Bureau of Investigation has since declined to issue a comment, but no doubt understand the magnitude of disarray that Strzok is responsible for leaving the FBI in, and of which Christopher Wray must now attempt to heal if it as at all possible.

The American people wish to see this witch hunt against the President of the United States of America end, and with it, those advocates of corruption to be prosecuted to the fullest extent of the law.

Strzok is only the beginning, but no doubt an enormous victory towards vindication for each of those who stand in solidarity with this President.

1 MORE down another handful still to go.

I except to see a few dozen resignations as they try to save their careers and pensions.

We must remember it is a handful out of estimated 14,000 it is drop in the bucket.

The OPR needs to be investigated as well. Why they would suggest so light a punishment, a mere 60 day suspension, for such an array of obvious underhanded obstruction, bias, and over reach. Why was the OPR trying to protect Strzok and his cohorts? Are they indeed part of the "secret society" as well. INVESTIGATE!

fuck them u lie u pay

Heard he has a go fund me page liberals are donating to. Sounds like what I would call internal bleeding of the elites and leftist pocket books….. Yeah! They still keep losing. First their minds to TDS. (Trump Derangement Syndrome) and now their cash. Win win!

The obnoxiousness of Strzok was the epitome of communist (liberal think). The arrogance as he pretended to be above all else in the room and his demeanor was of a satanic oracle egocentric of any question? Should we remind him he is just a man?

The obnoxiousness of Strzok was the epitome of communist (liberal think). The arrogance as he pretended to be above all else in the room and his demeanor was of a satanic oracle egocentric of any question? Should we remind him he is just a man?