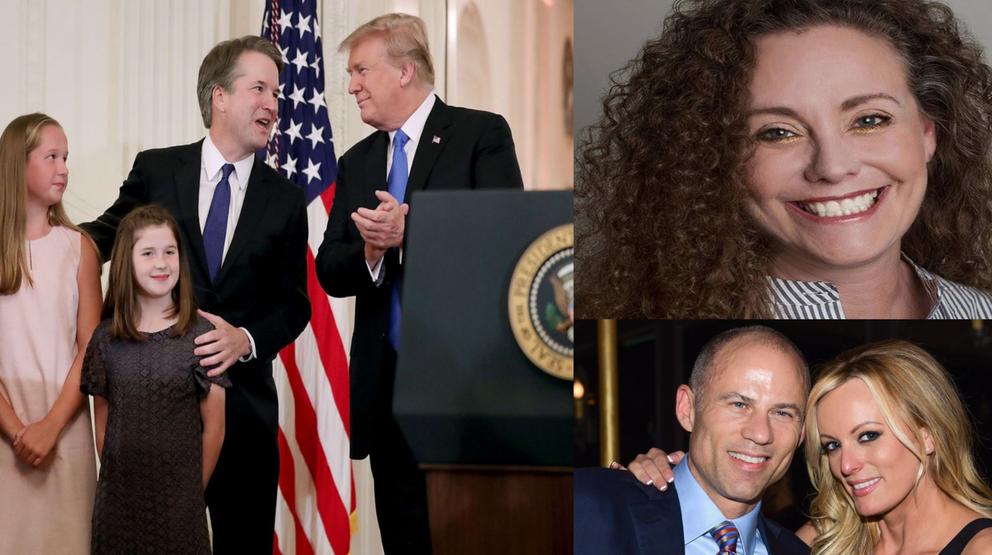 <blockquote class="twitter-tweet"><p lang="en" dir="ltr">Below is my correspondence to Mr. Davis of moments ago, together with a sworn declaration from my client. We demand an immediate FBI investigation into the allegations. Under no circumstances should Brett Kavanaugh be confirmed absent a full and complete investigation. <a href="https://t.co/QHbHBbbfbE">pic.twitter.com/QHbHBbbfbE</a></p>&mdash; Michael Avenatti (@MichaelAvenatti) <a href="https://twitter.com/MichaelAvenatti/status/1044960428730843136?ref_src=twsrc%5Etfw">September 26, 2018</a></blockquote> <script async src="https://platform.twitter.com/widgets.js" charset="utf-8"></script>

“Below is my correspondence to Mr. Davis of moments ago, together with a sworn declaration from my client,” the compulsive liar Avenatti tweeted. “We demand an immediate FBI investigation into the allegations. Under no circumstances should Brett Kavanaugh be confirmed absent a full and complete investigation.”

Judge Brett Kavanaugh is a good man, with strong traditional values and a promise to abide by the laws of the United States of America as a SCOTUS Justice.

That hasn't stopped the assault on his integrity and the outright defamation of character from being used by Democrats, to undermine due process.

Today's Avenatti tweet, alongside a New York Times story, both unveiled 55-year-old Julie Swetnick, who claims to be a victim of Kavanaugh’s supposed “sexual misconduct.”

Ms. Swetnick grew up in Montgomery County, Md., graduating from Gaithersburg High School in 1980 before attending college at the University of Maryland.

Swetnick says that at a party for those who attended Georgetown Preparatory School in the 1980s, she became a victim of the now 55-year-old Judge.

Somehow, after nearly 40 years, Swetnick has gained the ability to reveal her supposed attacker’s identity. Yes, it's true that <i>sometimes</i> an attacker isn't revealed until years, if not decades prior.

That is something that's being abused and manipulated here, say those who know Kavanaugh, with countless hundreds coming forward to his defense.

Swetnick says that her alleged assault, a rape committed by more than one man, occurred at a house party in the 1981 to 1983 time frame. She also claims that those assaults occurred at “one of ten” house parties she attended.

A bold and broadly painted picture of uncertainty.

There's just one minor issue with her statement. The slang and linguistics used in Swetinick’s argument didn't exist prior to 1986.

“In approximately 1982, I became the victim of one of these <b>“gang”</b> or <b>“train”</b> rapes where Mark Judge and Brett Kavanaugh were present. Shortly after the incident, I shared what had transpired with at least two other people. During the incident, I was incapacitated without my consent and unable to fight off the boys raping me. I believe I was drugged using Quaaludes or something similar placed in what I was drinking.”

Here's the clincher: the slang or lingo of “running a train” on a woman was something invented by rap group 2 Live Crew in 1986, a phrase used and made popular in the film “Project X.”

The song comes from the track, “We Want Some Pussy,” released in ‘86, whereas the claims of the newest Avenatti-molded testimony is alleging the incident occurred in 1981 to 1983.

To coin another pop-culture phrase, “somebody's lyin’,” and it would be safe to assume the honorable Judge Kavanaugh is not the one doing so.

The White House didn't issue a response as of immediate nature, but President Trump has unloaded on what seems to be a coordinated effort to hurt his SCOTUS nominee.

Trump did tweet that Avenatti was a “third-rate lawyer who is good at making false accusations” and slammed his credibility saying that he “is just looking for attention.”

This comes after the 45th President of the United States of America called the claims a “con game” by Democrats who are “trying to delay and obstruct his confirmation.”

For Brett Kavanaugh and his wife, they must endure the endless news about this allegation, and it's the assault on his character and reputation that will forever infuriate the man once he takes to the bench.

The Democratic Party has created their own worst enemy in these obviously fake allegations being used against Kavanaugh, and there's no doubt an angry insurgency forming among today's Republicans in response.

After the heinous attack on Alabama’s Roy Moore, there has been an overwhelming majority of Democrats realize that “Hey! These tactics work!”

This is a serious problem for our nation, the future integrity of every election, and thus, every appointment that would face similar attacks. Without any corroborating evidence, or proof.

What's occurring right now is a disgrace, and should be able to end by way of criminal charges against those making a mockery of our justice system and Congress with unprovoked and improbable lies.

CANT WAIT TILL THESE WOMEN ARE SUED INTO THE GROUND!!

Again Kavanaugh has over 200 women that either worked with or were schoolmates of his that instantly signed a letter stating his upstanding life and career. But leave it to the fake msm to take sides with a few women with an agenda and an ambulance chasing dirtbag looking for fame. I doubt Kavanaugh will sue for defamation of character but I do hope he does just to prevent future occurrences. If any of this happened it should have been addressed soon after the occurrence, not when or if it would serve an agenda. For goodness sakes the accusers cannot even back up their claims with a date, or location and one is even unsure if it was Kavanaugh!?

If Avenatti is involved, you can bet it's a scam!

I don't believe her or the others. The timing is too convenent. This has all the clues of a political stunt used too many times in the past.

The argument that Swetnick's terminology didn't exist until popularized in the late 80's is wrong. Teenage California boys knew the expression "pulling the train" at least as early as the early 1960's. But it's beside the point.

Brett Kavanaugh is applying, if you will, to serve on the Supreme Court. By all accounts his contemporary behavior, demeanor and legal work for the last 20+ years make him eminently qualified. He's the kind of guy you'd like to have as a neighbor. What he may or may not have done as a drunken teenager with drunken teenage girls who were injudicious enough to go to frat parties is of no consequence today. Republicans and all others should "man up" to this fact and stop chasing the red (pink?) herring the Left has thrown out for us.

After reading the lyrics I'm all in favor of shutting down the record companies that produce this filth.