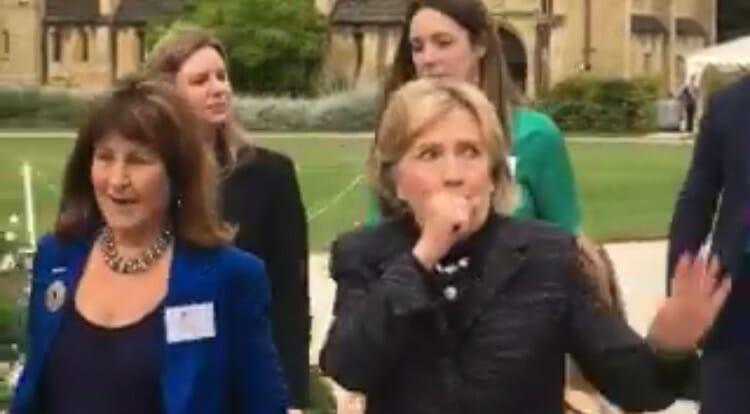 Hillary's Famous Cough is Back (Video)

Clinton attended the unveiling of a statue of Eleanor Roosevelt at Mansfield College in England on Monday afternoon, and unfortunately for her, the most striking thing from her during the event was not something she said or did. It was another coughing fit - something that should be a cause of concern for her family, friends and the Dems who support her.

Mrs. Clinton was videoed coughing uncontrollably while walking through Mansfield College with her entourage. At some point she even requested for a glass of water.

The same mysterious cough and other health concerns were displayed during the 2016 presidential election as seen in these videos:

Aside from the terrible coughing, Hillary was also seen with a back brace earlier this year. She mightily tried to hide it but failed to do so.

For her own good, maybe the former First Lady and Obama’s Secretary of State ought to see a doctor soon.

Her health should be of utmost importance to Hillary especially since it was announced on Monday that she and husband Bill Clinton are set to headline a series of live events together – billed "An Evening with The Clintons" – across the country in the final weeks of 2018 and spilling over into 2019.

The events are being promoted as "one-of-a-kind conversation with two individuals who have helped shape our world and had a front seat to some of the most important moments in modern history."

The events, much like their past money-making affairs be it speeches delivered, book deals signed, and others, don’t come cheap. The prices may vary depending on location but still expensive like the top tickets at the couple's events in Texas which were pegged at $699. The cheapest tickets at some of the events were around $70.

One of Huma’s 4inch pubes is stuck on her uvula still, from 5 years ago. Really, its true.

the evil whore caught an STD from her pos husband who raped his way to stardom.