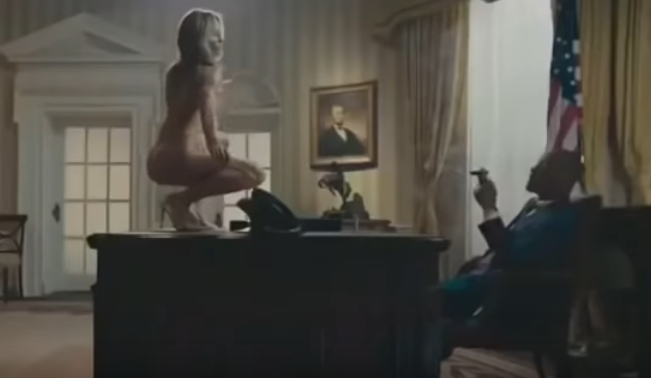 The woman said to strike a resemblance to first lady Melania Trump in the infamous T.I. music video has come forward to share that she has been getting a lot of threats because of her appearance in the project. She is also in a fierce, fighting mode as she lashed out at what she called cyberbullies.

Actress Melanie Marden took to popular social media platform Instagram to air her views. She wrote on Monday: “Wow, I don’t usually post about haters but I need to. I was hired (as an actress) not a stripper to portray Melania Trump. It was a creative choice for me and an opportunity to empower women.”

Marden added in her defense: “I wanted to be brave, be fearless and for the first time in my life do a role that required nudity. The body is nothing to be ashamed of.”

She also tried to connect her stripping in the music video to the #MeToo movement. Marden said: “In this time where women are finally speaking up about being victimized I felt good about being a strong enough woman to portray a nude First Lady.”

Marden insisted that she’s proud of her work and her participation in the said music video. She even likened her Melania portrayal to Alec Baldwin doing the Trump role on SNL.

She also warned those who have “nothing nice to say”’ to simply shut up.

Marden is actually a Canadian. She enumerated the kind of threats she said she’s been getting including being hit with a car, by a baseball bat, get raped and then killed.

The actress also said she didn’t understand why Melania was offended by her portrayal and the music video. She even tried to turn the tables on the President saying that the President “does a lot of bullying himself.”

She even called the First Couple being “thick-skinned.” She stressed that she didn’t degrade or insulted the first lady.

Melania’s spokesperson, Stephanie Grisham reacted to the music video and said it was “disgusting” and “disrespectful.”

Marden saying she can’t understand why Melania would be offended by the music video.