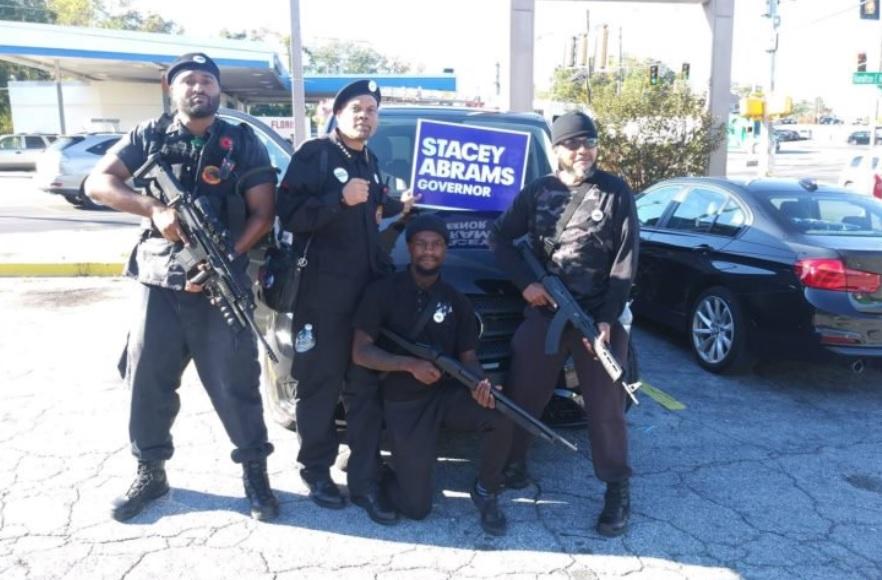 The group known as the Black Panther Party sent members to support former Democrat state representative Stacey Abrams in her bid for governor against Republican Brian Kemp. The Black Panthers announced their presence on social media and openly carried assault rifles as they marched through parts of the West End neighborhood.

The state of Georgia does allow open carry and it is legal to carry an assault rifle with the required permits. The image runs contrary to Abrams agenda who wants fewer firearms and to disarm citizens. Abrams herself said in a CNN interview, "I believe we have to ban assault weapons in the state of Georgia."

How can you hold the belief that assault weapons should be banned, yet condone supporters who openly carry assault weapons? If Abrams truly believes in banning assault weapons, she should condemn the Black Panthers' support of her. If she is not willing to do that then she should admit her stance on gun control is convoluted and ever-changing based on which position most benefits her political career.

It is one thing to say that you believe assault weapons should be banned, but when you have people parading around with your "Stacey Abrams for Governor" sign you should denounce their actions. As it stands now, Abrams' lack of response to the Black Panthers support is a foreshadowing of a larger problem that will only be amplified if elected.

Related coverage: <a href="http://thegoldwater.com/news/41289-Epic-Crowds-Turn-Out-For-Trump-s-Rallies-in-Georgia-and-Tennessee-Video">Epic Crowds Turn Out For Trump’s Rallies in Georgia and Tennessee (Video)</a>

The Black Panthers even posted a nearly 30-minute video on their Facebook page showing the group holding shotguns and rifles while posing with Abrams' campaign sign. The video depicts the group marching through the West End of Atlanta and shouting "black power" and "power to the people". The picture presents an unnerving prospect for voters who may be wanting to vote against Abrams.

When The Daily Caller reached out to Abrams campaign they were forwarded to a statement from spokeswoman Abigail Collazo. The statement did not address the Black Panthers march but it did attack Abrams' opponent Kemp, "Brian Kemp is the only candidate in this race who has posed for pictures with supporters wearing racist, hate-filled t-shirts and refused to denounce them, while Abrams continues to condemn any racist, anti-Semitic, or otherwise discriminatory words and actions.

"Unlike Kemp, Abrams is a leader committed to running an inclusive campaign focused on bringing all Georgians together to find bold solutions on critical issues like health care, education, and the economy," Collazo continued. One person stopped their vehicle to speak to the Panthers and after they drove away one of them was heard saying, "You need to march in your neighborhood. When we was in West Virginia, 99 percent crackers, stone cold crackers."

Although Abrams did not address her armed supporters patrolling the streets, a Kemp spokesman did. Ryan Mahoney told The Daily Caller, "It's no surprise that militant Black Panthers are armed and patrolling the streets of Georgia for Stacey Abrams. The Black Panthers are a radical hate group with a racist and anti-semitic agenda. They are dangerous and encourage violence against our men and women in uniform."

"Stacey Abrams should immediately denounce the Black Panthers and their hateful record of racism," Abrams continued. "She should stand against and condemn their attempts to intimidate hardworking Georgia voters just days before the election."