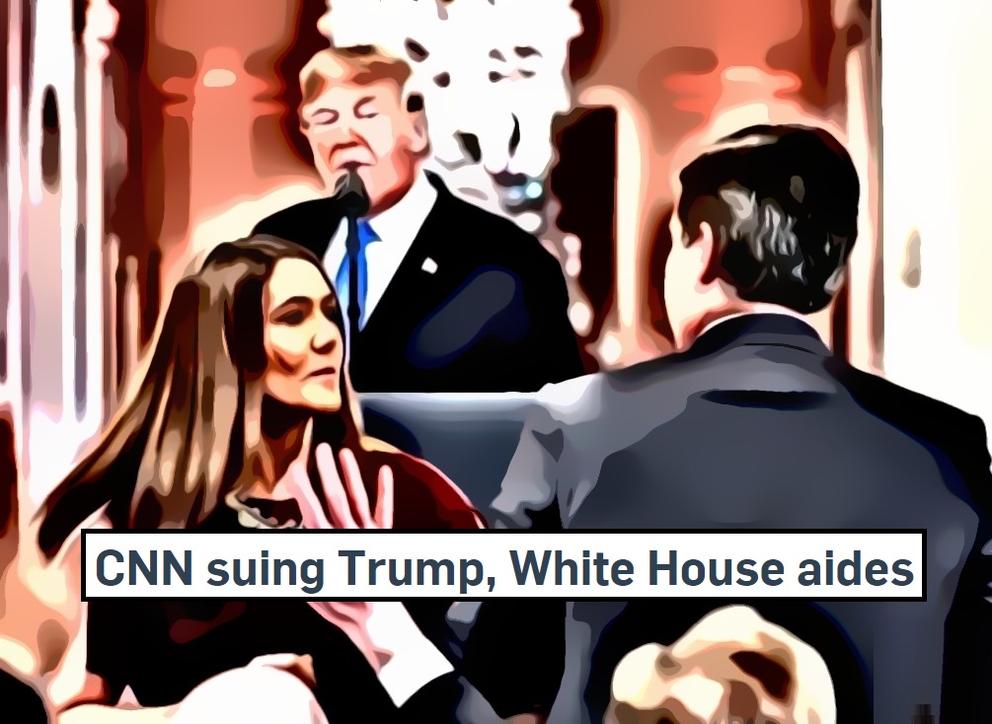 CNN has filed a lawsuit against President Donald Trump and several White House aides after they suspended the press pass for the US cable news network’s correspondent Mr. Jim Acosta.

In a statement published by the network, they stated: “CNN filed a lawsuit against the Trump Administration this morning in DC District Court.”

CNN’s lawsuit demands furthermore that Mr. Jim Acosta’s pass be immediately returned while the case is heard in court. Political commentators, however, were quick to point out there’s little chance of that happening.

Last week, the White House, by order of Press Secretary Ms. Sarah Sanders, suspended Mr. Acosta’s access to the White House after he and Mr. Trump had a heated exchange during a press conference last week. Mr. Acosta was accused of having put his hands on an intern while she attempted to retrieve a microphone multiple times. CNN meanwhile claims the suspension of Mr. Acosta’s press pass was only done “in retaliation for his challenging questions.”

<blockquote class="twitter-tweet" data-lang="en"><p lang="en" dir="ltr">BREAKING: CNN files lawsuit against President Trump and top aides for what the network argues is a violation of CNN and Jim Acosta&#39;s &quot;First Amendment rights of freedom of the press and Fifth Amendment rights to due process.&quot; Complaint here: <a href="https://t.co/8HCwEFaRnn">https://t.co/8HCwEFaRnn</a></p>&mdash; Joe Concha (@JoeConchaTV) <a href="https://twitter.com/JoeConchaTV/status/1062351256814080000?ref_src=twsrc%5Etfw">November 13, 2018</a></blockquote>

Although many in the mainstream media defended Mr. Acosta, there were also critical voices who said he refused to concede after President Trump had responded to his question.

The BBC’s Emily Maitlis, who works for a network that is also not the biggest fan of President Trump, dismissed the claims that the US President's attempts to stop the CNN journalist asking further questions was an attack on press freedom. Instead, she said that Mr. Acosta was 'hogging' the microphone in the press conference.

Ms. Maitlis: "What happened in that room was not the ultimate fight for press freedom. This was a man who'd had his turn and had been told he couldn't hog the whole time."

Just as the White House itself, the veteran British anchor emphasized that the President spent 90 minutes allowing journalists to quiz him.

As to the Mr. Acosta incident, she noted: "He was called on by Donald Trump to ask whatever question he liked. And when he'd finished asking one, he then asked another - with interruption follow-ups in between. It was only when he attempted his third question - or possibly fourth depending on how you define the follow-ups - that the president got angry and asked him to sit down."

Ahh no, they are left.

But, but, BUTT; CNN say`s he never laid a hand on her. CNN is always right & I believe everything they say.

Even if my eyes, facts & the truth dictate otherwise!

I HOPE ACOSTA SITS IN GITMO TILL HIS HAIR FALLS OUT AND HE DRAWS HIS LAST BREATH BEHIND BARS. FAKE NEWS IS TREASONOUS!!!

ACOSTA IS SUCH A MAGGOT!!! DISGUSTING WASTE OF OXYGEN!!!

CNN is not banned from the WH just that jackass is. So CNN just send a more behaved or real journalist and there's zero issue.

She should file felony charges on him for pushing a federal employee doing her job away from him. What better evidence than the tape. I was surprised he wasn’t forcefully removed from the room. If I behaved that way in CNN’s corporate offices, guards would have shown up. There are enough clowns on television networks vying for attention about their opinions.

In this case, CNN are just looking to deflect from his (Acosta's) piss poor conduct and behavior in the WH Press room.

The Press /Media does not own or control WH access, that is under the Presidents and the Secret Services authority.

Will they find some Federal Judge willing to make some Liberal brownie points… YES most likely.

But it will quickly be nullified by the President just NO Longer holding WH Press conferences and only submitting press releases.

While they argue this in the courts.

The White House owns an controls the WH Press Room and all WH Access, NOT the Media or the Courts.

There is NOTHING required by law, or the US Constitution to hold, or conduct WH Press Conferences.

The only requirement of the President is the annual State of the Union address. An even that does not require him to be present, as it has been handled previously in history by using only a written and courier delivered letter to congress.

So there is nothing to keep the President from just submitting Press Releases and addressing only written questions with written responses.

But likely then, the MSM would just create their usual fictional "An anonymous White House source close to the President" to spin their paid political lies and liberal agenda.