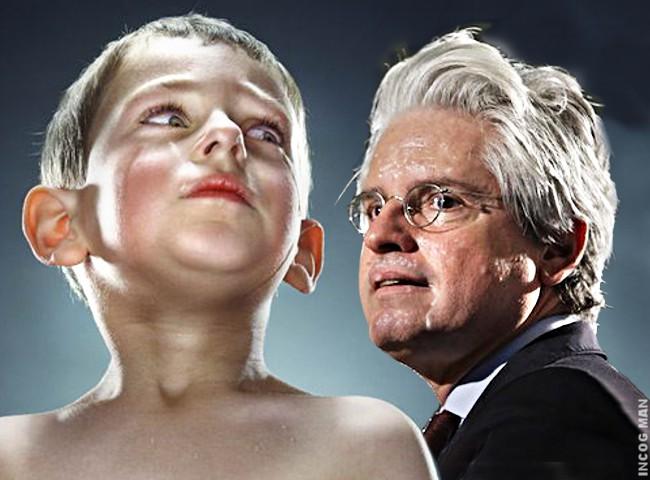 Pedophile in Washington Caught with 20,000 Images of Child Pornography

In today's episode of why we need to bring back public executions, we have a fine example to further underscore this point.

A vile pedophile from Richland, Washington is now accused of having over than 20,000 videos and images of children engaged in pornography on the hard drives of his computer.

The disgusting creature is 38-year-old Joshua P. Gault, who was finally caught when a friend working on his laptop discovered several videos with titles about children engaged in absolutely sickening sex acts.

To make matters even more interesting, when analyzing all of the images, investigators also found evidence that Gault had engaged in sex with an unconscious woman inside of his home and filmed it, court documents said.

The female was then contacted by detectives saying that she did not remember the incident and did not give Gault permission to have sex with her or record her, suggesting that he may have drugged her in the process of carrying out his demented sexual perversions.

According to the Benton County Superior Court, Gault will face a total of nine charges for the imagery in which was found on his device, which is somewhat stunning due to the sheer number of images found.

He's asking for his trial to be pushed up to March 26th of 2018 now as a result, which also gives investigators more time to bring about charges for the female victim.

Court documents show that the friend was working in Gault’s computer when he found between 50 and 75 videos with suspicious titles and opened two to see what appeared to be young kids engaged in sex acts before actually contacting law enforcement.

Upon serving a search warrant to Gault’s residence authorities seized a laptop computer, a desktop, multiple cell phones, and several other electronic devices for evidence and examination.

Police said that many of the images found on his devices “were of known and previously identified child victims,” including the preteen girl who was the subject of the “Vicky” series, which involved a young girl from the area who suffered a brutal rape and torture at the hands of her father.

That girl is now an adult, and<a href="http://www.tri-cityherald.com/news/local/crime/article184288328.html"> was raped multiple times by her dad</a>, a former police officer about twelve years ago.

In that specific case, the father made his own daughter dress up like a hooker and talk dirty, and bound her with ropes while he documented the sexual abuse, which went on to become one of the most widely distributed series in child-pornography circles amongst these disgusting pedophiles.

According to Benton County Prosecutors, many of the images and videos are of children who are the age of a toddler, in which are being sodomized and raped by adults.

It's also believed that Gault sent many videos to a suspect in another case, which was accessed by an undercover police officer.

That video showed a preteen girl having sexual relations with an adult and the IP address linked back to Gault.

There's no doubt a subculture of pedophiles in the area, with many conspiracies involving <a href="https://thegoldwater.com/news/1475-Mass-Meditation-To-Bring-Down-Elite-Washington-Pedophile-Ring-Underway>federal agencies under Obama</a>covering up those pedo rings.

Unsurprisingly, since he's connected to what appears to be an elite pedo circuit he's free from jail on a $100,000 cash bond.

I am unable to find any picture of Gault via social media or mugshots, meaning he's also likely paid to remove those.

These are sick, and sometimes powerful pedophiles that are being brought down.

damn one less poster on /b/

This is disgusting. Why was he even let out on bail.