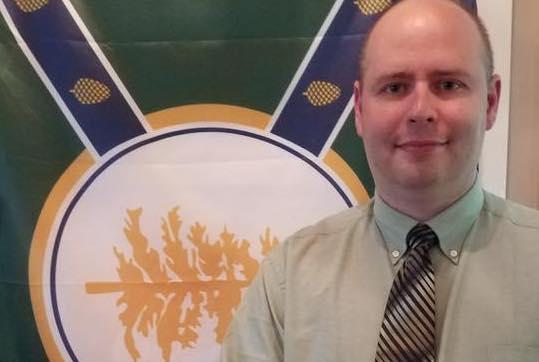 Another sign of the ever-increasing lack of freedom inside of the United States to be reported today, after a town manager in Maine was fired for exercising his First Amendment right in regards to Muslim refugees and eventually labeled as somehow being a "white separatist" for being proud of his culture.

Thomas Kawcynzki was the town manager for Jackman, Maine, who had grown a reputation for turning around the city from once having a budget crisis to creating a surplus and becoming a huge success.

On January 19th, the<a href="https://www.pressherald.com/2018/01/19/jackman-town-manager-under-fire-for-promoting-white-segregation/"> Portland Press Herald </a> was conducting an interview with Kawczynski, in which they asked him about a group he's a steward for, called "New Albion", which promotes securing the history and culture of New England.

During the interview, Kawczynski was asked about the recent flood of Muslim refugees into many cities in New England, and the increasing crime rates as a result.

He expressed that he's proud to have been able to "experience the joys of living in a monoculture" and he opposes Islam because it is "not compatible with Western culture."

Kawczynski said that "Islam is the scourge of Western civilization," and this caused outrage amongst the liberal leadership of the Maine Town, City, and County Management Association.

Several members began accusing Kawczynski of promoting what they described as "white separatism".

37-year-old Kawczynski fired back, and said in no way was he promoting racism. "This is not a movement based on racism," he said

The town of Jackman has historic European roots, being a settlement of some of the first Americans.

"Maine is a better place because of the diversity," said Sillari, a leader for the leftist group Moral Movement Maine. "His way of thinking is an outdated way of thinking about the world."

It has a population of fewer than 1,000 people, who are overwhelmingly white, and that's just a fact Kawczynski has no control over. Despite the claims of Moral Movement Maine, there are a total of fifteen (yes, 15) minorities in Jackman.

His organization "New Albion," promotes traditional ideas such as Polish parades, festivals, and events celebrating the culture inside of Jackman.

Albion was a term used by the ancient Greeks to refer to the island of Britain. New Albion's membership includes a "few dozen people across the state," Kawczynski said.

The New Albion website says that "I believe in all people, living as they choose, in free determination. For the people of New England, our folk is people of European ancestry and ideas, emphasizing the value of work, communing with nature, and a society based upon order."

I'm not sure how being proud makes you a racist, but for the left, it certainly gives them a reason to believe so.

"There are a great many people who have thoughts that are not considered permissible," he said, "and if the media and the lynch mob determine to force them into darkness, then don't be surprised when the darkness comes back in the form in which it was required to develop."

Kawczynski told the newspaper he is against bringing people from other countries and cultures to the US, but denied that he is in any way racist.

Apparently, to the left, being proud of your culture and heritage suddenly makes you "a racist," as they endlessly attempted to portray Kawcynzki as somehow being a "white separatist," which is the furthest thing from the truth.

Along with his wife, Kawczynski proclaimed that New Albion promotes traditional western values emphasizing the positive aspects of our European heritage and uniquely American identity.

Despite his best efforts of simply being proud, the far left was determined to see him fired.

Several anti-white groups and liberal mouthpieces such as the Council on American-Islamic Relations and the Southern Poverty Law Center decided to attack Kawczynski as well.

"I reject categorically the suggestion that I am a racist, a bigot, a Nazi, or any of the other foul names which have been attributed to me or my wife. What I will say, and I will say this quite publicly, is I do believe that we have the rights as citizens, as American citizens, to assert that some ideas are better than others and to have discussions about those ideas," Kawczynski said.

Kawczynski continued, "That does not take away people's constitutional rights to express them. But no citizen, without regard to what their office is, should have to give up their rights of free expression or freedom of assembly."

"It's unacceptable to see people in leadership positions espousing white nationalist views. The Jackman selectmen did the right thing by removing Tom Kawcynzki from his position as town manager," Beirich said.

The attacks continued, with the Maine Town, City and County Management Association finally coming to the conclusion Kawcynzki "had to be removed".

In the letter, the<a href="https://www.mtcma.org/wp-content/uploads/2018/01/MTCMA-statement-re-Jackman-TM.pdf"> MTCMA stated</a>, "the divisive and extreme beliefs and opinions expressed this week by the Jackman Town Manager Thomas Kawczynski are fundamentally incompatible with the role and responsibilities of the town manager."

With the ridiculous outcry, Kawczynski was fired.

Thomas Kawcynzki has since proclaimed he's filing a lawsuit against the MTCMA and has set up a GoFundMe to raise the cash needed for legal representation. GoFundMe, of course, removed his efforts from their website.

"Take five things you say that sound terrible, remove them from context as much as possible, and paint a picture of a person's life designed to make people hate and defame you. That's what was done to me personally today and to New Albion as a whole," Kawczynski wrote on his website on Friday. "I separate my personal cultural ambitions from my professional career, but some people are trying to use my efforts to promote certain ideas to destroy my ability to provide for myself and my wife."

His mistake, he said, was saying that white people should be proud of their heritage and because of that, "there are those who would destroy me."

"Never mind the inconvenient fact that I've never said a cross word about any minority, and I think ALL people should be proud of their heritage and backgrounds," he wrote. "That wasn't fit to print."

You can see on Facebook the types of attacks being waged against Kawcynzki by AntiFa inside of Jackman, Maine. He simply stated that "Whites deserve the same rights as other Americans," and he's being called a "Nazi" for saying this.

This particular user has a public profile in which he shows his efforts to have Kawczynski fired.

The insanity has to end. There's nothing wrong with being proud. It's okay to be white.

It's okay to be white

We have that right !!! I wear shirts that say white pride, it’s okay to be white, regardless of what other races believe!! #fucthatshi