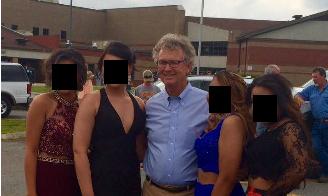 The Goldwater recently gained access to several emails regarding the allegations of sexual harassment and abuse by an authority figure by a teacher from Warren County High School in Tennessee. As we reported earlier, multiple girls came forward between October 2017 and February 2018. The official opinion of the principal, police and even the District Attorney investigating was that the girls claims that they were inappropriately touched is true. Despite that, the general consensus apparently is that the investigation had discredited the girls. In actuality, it is far worse than that. The girls are believed but no action has apparently occurred due to Coffee County DA Craig Northcott ruling that nothing illegal had transpired. This sets a dangerous precedent for the school.

Judging from Facebook comments by locals, these girls weren't the only ones who had been made uncomfortable by teacher and coach George Smartt. One female student athlete reportedly left the team after going to an adult with what she and the adult friend both felt were "inappropriate remarks."

The following is from a letter a parent sent to District Attorney of Coffee County Craig Northcott:

"Actually I was unaware of him placing his hands on her waist which is not appropriate and I have seen where my daughter places her hand to identify where he touched her on her upper thigh. Anatomically correct wording would be groin and mons pubis. I use proper anatomy terminology because of my extensive training and education in the operating room as a certified surgical first assistant. Last time I checked that area and the waist constitutes sexual harassment in the workplace. I'm trying to understand your point however why is ok to touch a minor in that area when it has not been accepted for 20 or more years. He also has denied her request for personal space multiple times and continued to intrude upon her space. And also why was proper protocol not followed the first time she reported mr. Smartt? And why did they not follow it this time with the exception of mr carpenters questioning. She has been through enough and just because a then 14 year old minor doesn't know proper anatomy terminology or exactly what defines medically the upper thigh. Which is above the leg terminology wise and by her own demonstration."

"You are certainly welcome to pursue whatever avenues that you believe are appropriate for your child. I understand that you are upset. However, I wanted you to be clear about the reports. Your factual description (both in your email below and implied by your subsequent email) is beyond what your daughter described on multiple occasions to different people. In your subsequent email, you indicate that you agree with my factual findings. Thus, I would encourage you to review the factual findings again so that you can better understand the situation.

Further, I am uncertain about what you mean when you state that you "realize warren county [sic] legal ties to coffee county [sic]". To be clear, I am the District Attorney General for the 14th Judicial District which covers Coffee County. Warren County is in the 31st Judicial District. Thus, I normally would have no jurisdiction over or professional dealings with Warren County. The exception is when I am ordered to handle a matter, like this one, when there is a conflict with the DA's office for the 31st Judicial District that prevents that office from handling the matter. I have no "legal ties" to Warren County. Thus, whatever actual or perceived legal ties that there are between the two counties had no impact on my evaluation of this case.

In the end, the conduct that your daughter alleges Mr. Smartt to have done is not criminal. I have reviewed your subsequent email to me describing the sexual offenses for which you would like him charged. They simply do not apply to the facts alleged by your daughter. To the extent that you are seeking me to charge him for a crime that you believe that he might commit in the future, I cannot and will not do that. It would be a gross abuse of my authority as well as unethical for me to do so.

Again, none of this is meant to minimize or marginalize your concern for your daughter. It is simply meant to further explain why criminal action is not appropriate in this case. I pray that you and your daughter will move forward productively and successfully in all of your future endeavors."

What is most distasteful and concerning apart from the alleged abuse itself is the cavalier attitude by those in authority who would have been fine with this story remaining untold. At the moment, it seems that the WCHS standard policy in the case of inappropriate touching by a figure in authority is to do nothing and let the case fade. We, however, are not willing to let this story just fade away until more of the whole story is exposed in full.

We have reached out to the superintendent and DA in question for a comment and hopefully will hear back from them. The teacher in question still has not responded to any of multiple queries. We will continue to update this story as new information is available.