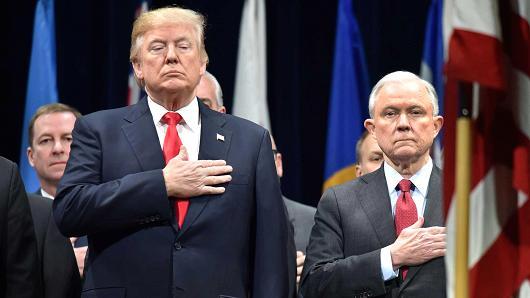 The lack of coverage surrounding this case, which yet again showcases another member of the intelligence community pleading guilty to retaining classified materials, reminds the public that the mainstream media refuses to report these crucially important stories despite the DOJ press release.

The Trump Administration has promised to “drain the swamp,” and with the conviction of 53-year-old Reynaldo B. Regis, of Fort Washington, Maryland and an additional CIA contractor, this only further exemplifies the promises made actually being kept by President Trump.

Ironically, the charges against today's CIA handler mirror the crimes that former FBI Director James Comey is responsible for, yet little to no prosecution has occurred <i>yet,</i> with a strong emphasis on the fact that the active investigation from the Office of the Inspector General via Michael Horowitz is still ongoing.

<blockquote>”According to court documents, Regis is a former employee of a government contractor who was assigned to the CIA between August 2006 and November 2016.”</blockquote>

<blockquote>”During his time at the CIA, Regis conducted unauthorized searches in classified databases and copied classified information into personal notebooks, which he removed from his workspace at the CIA and stored in his home without authorization.”</blockquote>

<blockquote>" The classified information contained in the notebooks included information relating to highly sensitive intelligence reports, the disclosure of which could cause serious damage to the national security.”</blockquote>

<blockquote>”Regis faces a maximum sentence of five years in prison. Regis is scheduled to be sentenced on Sept. 21. The maximum statutory sentence is prescribed by Congress and is provided here for informational purposes.”</blockquote>

<blockquote>”The sentencing of the defendant will be determined by the court based on the advisory Sentencing Guidelines and other statutory factors.”</blockquote>

<blockquote>”Trial Attorney Scott A. Claffee of the National Security Division’s Counterintelligence and Export Control Section and Assistant U.S. Attorney Danya E. Atiyeh of the Eastern District of Virginia are prosecuting this case.”</blockquote>

This story follows last month's criminal case from the DOJ by an agent of the Federal Bureau of Investigation who also entered a guilty plea, although much of the mainstream media refused to cover this.

Most people probably have no idea that one FBI Agent was recently prosecuted and even plead guilty to leaking classified National Defense Information on April 17th of 2017, but it did in fact occur.

Special Agent Terry Albury admitted to violating his oath to protect our country by disclosing to a reporter classified information that, as an FBI agent, he was entrusted to protect.

“Mr. Albury was entrusted by the FBI with a security clearance, which included a responsibility to protect classified national defense information. Instead, he knowingly disclosed that material to someone not authorized to receive it,” said Assistant Director Priestap. “The FBI will work tirelessly to bring to justice those who would expose America’s secrets. Today, as the result of the hard work of dedicated special agents, analysts, and prosecutors, Mr. Albury has taken responsibility for his illegal action.”

“In violating his oath of office Terry Albury not only betrayed the American people but also his fellow FBI employees who work to safeguard sensitive information on a daily basis," said Special Agent in Charge Laycock. “No one is above the law and the FBI will continue to investigate individuals who disclose classified material to those who are not authorized to receive it.”

According to court documents, beginning in 2016 and continuing through August 2017, Albury knowingly and willfully disclosed national defense information, classified at the Secret level, to a reporter. Albury employed methods to avoid detection, including printing documents that he created by cutting and pasting portions of an original document into a new document so as to avoid leaving a record of having printed the original, classified document. Albury also accessed documents on a classified computer and took pictures of the computer screen in order to photograph certain classified documents. Those additional classified documents were recovered on an electronic storage device found during a search of his home.

While we're unsure of the details of this arrest, as in what exact files were given to the media, and how they were used to spread disinformation that benefited the Democratic Party, we know that James Comey was undoubtedly aware of what Special Agent Albury was doing while working for him.

Again, the media blitzes to report on Comey's book tour, but completely fails to tell the American people what sort of illicit activities the FBI was engaged in under Comey.

James Comey helped “set the deck” in favor of Hillary Clinton during the investigation into her crimes because it would have brought down so many additional high-powered billionaires, government agencies, and members of the Democratic Party who assisted in selling away America's National Security during Uranium One.

One of those people is Robert Mueller himself.

So when you're asked why is Robert Mueller so determined to stop President Trump, you only need to know that the answer lay with him trying to <i>save his own skin.</i>

With the anticipation growing in response to the long-awaited<a href="http://www.thegoldwater.com/news/24982-Next-Chapter-of-OIG-Report-Hillary-Clinton"> next chapter of the OIG report</a>, today's news is one more example of just how corrupt the intelligence community actually is as for how dangerous the deep state can be in harming America's national security.

“Draining the Deep State swamp,” is something that's occurring before your very eyes, and it brings into question that with both of these men entering a guilty plea, <i>without a trial</i>, whether they actually have agreed to testify in larger cases once the Office of the Inspector General releases his final reports and Special Prosecutor John Huber brings about charges as per the behind-the-scenes investigations led by Attorney General Jeff Sessions that are no doubt occurring.

Trust the plan. It's happening.