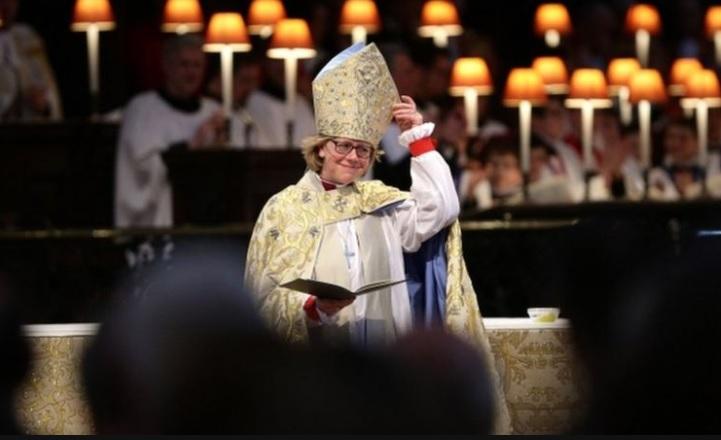 Maybe Fewer Kids Will Be Molested Under First Female Bishop

Every week, a new bishop or Catholic official is exposed as a pedophile or a larcenist, sometimes both. Now, the latest person to be crowned a Bishop is a woman. That's right, 56-year-old "Right Reverend Dame" Sarah Mullally has been installed as the first female Bishop of London. The service was held at St. Pauls Cathedral in the UK last December as Mullally became not only the first female Bishop but also the 133rd Bishop in London.

Related coverage: <a href="https://thegoldwater.com/news/22605-Catholic-Priest-in-the-Vatican-Arrested-for-Child-Pornography">Catholic Priest in the Vatican Arrested for Child Pornography</a>

Mullally was a former chief nursing officer before becoming a Bishop for the Catholic church. Dr. Richard Chartres who retired in February of 2017. Mullally now holds the most senior position in the Church of England, a title previously held by the Bishop of Crediton in Devon and the Canon Treasurer at Salisbury Cathedral.

She was appointed a Dame Commander of the British Empire in 2005 in recognition of her outstanding contribution as a midwife and nurse. True to archaic Catholic tradition, Bishop Mullally knocked three times on the Cathedral's Great West door with her pastoral staff. The newly appointed Bishop gave a sermon where she preached on the theme of "being subversive for Christ".

Bishop Mullally also noted that 150 years ago, suffragettes placed a bomb underneath the same seat which was enthroned on. She also spoke of the challenges facing London such as escalating knife crime and referenced historical sexual abuse within the Church. That is a positive step for such a high figure in the Catholic church to acknowledge the atrocities the Catholic religion has become known for.

She also called for a culture that "challenges deference and the abuse of power" and listens to victims of abuse. "We need to speak up for the whole of London, to work to challenge the violence and the crime that have led mothers to clean their own children's blood from our pavements. Could there be a starker image or a more urgent wake-up call for all who love this city, who believe it can have an even better future?"

"Mullally was a former chief nursing officer before becoming a Bishop for the Catholic church"……sorry boy but she belongs to the church of england or anglicanism, a kind of fancy lutheranism. A protestant brench of the cristianity, she is not a catholic at all.

You can't expect (((the Goldwater))) to check its facts.

Lesbians do exist in places which are co-ed such as convents. Lesbians can be bullies and are seductive as well. Every adult who comes into contact on a regular basis with children should be given a thorough psychological examination to unearth hidden desires stemming from their own circumstances as children (which seems to be the theme - we give what we got).