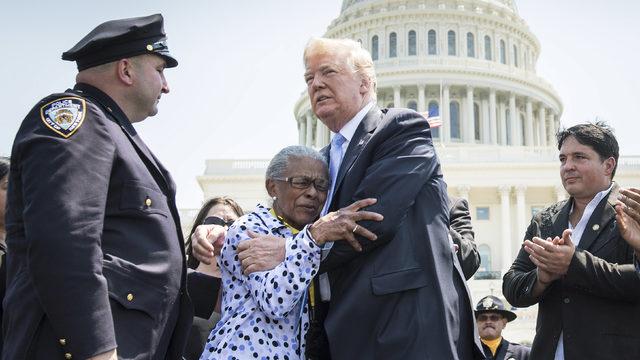 Trump to Children of Fallen Police: “Love Of An Entire Nation Wrapped Their Arms Around You”

President Trump on Tuesday gave a speech to the family members of America's law enforcement agencies who have lost their lives in the line of service, where he spoke with such passion that he brought tears to the eyes of anyone watching.

During a speech, the President gestured both strong emotions and helped to mellow the mood with a hilarious light-hearted comment as a means of bringing up the spirits of those in attendance, and the crowd roared in both laughter and applause.

President Trump lifted the souls of children of lost officers when he made an announcement in regards to the illicit and illegal immigration into the United States of America, and the end of the “catch and release” practice of the Immigration and Customs Enforcement agency.

<h3><b>“We have a catch-and-release program too,” President Trump said. “It’s called, we catch them and we release them in the country they came back from. We’re getting them out or we’re putting them in prison.”</b></h3>

Trump has a unique way of resonating with crowds, especially with his supporters, and America's brave law enforcement agencies all love their President since he cares so much about their hard work and the risks they endure every day when they put on the uniform.

President Trump took a serious note when he honored those who gave the ultimate sacrifice in the line of duty, and spoke directly into the hearts of the children in which fallen officers have left behind, in what some would say is the most powerful speech of this Administration’s tenure thus far.

After eight long, and more-often-than-not miserable years of Barack Obama trashing the courageous men and women who wear the badge, favoring the criminals who chanted heinous slogans such “pigs in a blanket, fry’em like bacon,” police officers, sheriff's deputies, highway troopers, detectives, state police, and other law enforcement agencies are thankful that Donald J. Trump is their President.

In mentioning the threats that illegal aliens pose to society, and the horrendous crimes coming from the likes of MS-13, President Trump brought up the fact that the gang's leadership have encouraged their members to assassinate police in New York on what the gang claims are a plan to reclaim the streets from police officers.

“They got it wrong. We are the ones who are taking back the streets,” Trump said as the audience roared with applause. “We are getting them out of our country by the thousands.”

President Trump also gave an update on the First Lady of the United States of America, Melania Trump, saying that, “I want to start by saying that Melania is in the hospital doing really well. She’s watching us right now. And I want to thank the incredible doctors at Walter Reed Medical Center. They did a fantastic job. So thank you, and she sends her love.”

<h4>The Goldwater would like to extend a special thank-you to the brave men and women who lace their boots every day and put their lives in danger so that we may live in safe communities in the United States of America. To America's finest, our law enforcement: THANK YOU FOR YOUR SERVICE.</h4>

“We stand with our police and we stand with you 100 percent, and I think we’ve shown that. Vice President Pence, members of my Cabinet, members of Congress, and distinguished guests. Thank you for joining us on one of the most important and solemn occasions of the year, the day we pay tribute to law enforcement heroes — and that’s what they are, heroes — who gave their lives in the line of duty,” said President Trump. “They made the ultimate sacrifice so that we could live in safety and in peace.”

“<i>To the families and survivors with us this morning, I know today is filled with sadness and pain</i>,” President Trump said. “But today is also filled with love — the love of an entire nation wrapped its arms, and they have wrapped their arms right around you. They love you.”

<h2>“They’re praying for you, they’re grieving with you, and pledging to you that we will never forget our heroes, ever,” the 45th President of the United States of America, Donald J. Trump said.</h2>

In regards to the families of the lost men and women of our nation's police, President Trump had a heart-filled message as well. With a serious and emotional appearance on his face, the President said, “This morning, I especially want to speak to the young sons and daughters who join us here today. I want you to know that your moms and dads were among the bravest Americans to ever live.”

President Trump has brought tears to the eyes of countless patriots, and his continued renditions of the time-honored appreciation for our police officers around the country only further give credence to the fact that <i>Trump has once again made us proud to be Americans</i>, where at least we know we're free, and we won't forget the men who died who gave that right us.

This is why it's overwhelmingly important to thank a police officer, and if by chance you cross their path as a suspect, whether it be pulled over for a traffic citation, or any other reason, you respect them with a “yes sir, yes ma'am” attitude.

While the mainstream media loves to play onto the bad cops, or mislead about cases with attention-grabbing headlines, 99.99% of our law enforcement agencies are respectful, courteous, and compassionate American patriots.

They deserve our thanks, and they deserve our respect. Thank you, and thank you to the families of those who serve for the courage of your loved ones, and the honor they bring to your name and this great nation.

Another well written article. Thank you.

I only recently found this gold nugget source for my news.

A remarkable occasion, about remarkable people.. being the first responders and their enduring families. Then the President who showed great compassion and respect, and thank goodness there was a sincere bipartisan coverage of proceedings.