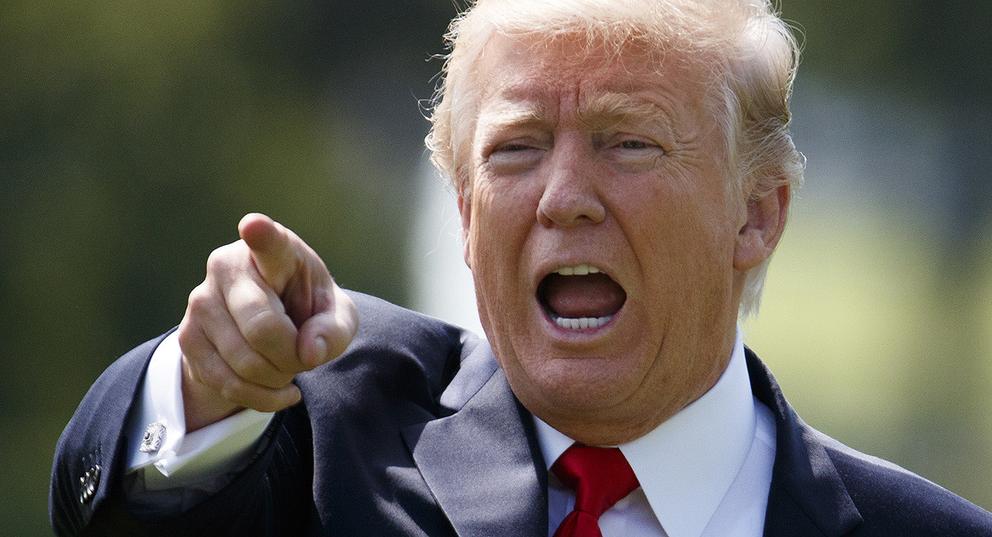 President Trump has ramped up the war of words against sanctuary cities and illegal aliens in America, on Wednesday saying, "These aren't people. These are animals."

The comments, as expected, have liberals virtue signaling all across social media to depict the President as being “bigoted.” But as usual, those same Democrats have little at all to say in response to the murders, rapes, molestation, and kidnappings of Americans at the hands of illegal aliens.

Today's rhetoric comes amidst increasing pressure from the Trump Administration on the Immigration and Customs Enforcement agency regarding the rounding up the illegal aliens crossing our borders and locating those already existing inside of the United States of America illegally.

Another massive obstacle in which ICE has faced comes from sanctuary cities and states such as New York and California, where the state’s Democratic Party leadership have enacted policies that all but bar local police and county Sheriff's offices from working in cooperation with federal law enforcement agencies in sharing information on illegal aliens.

“We have people coming into the country or trying to come in, we're stopping a lot of them, but we're taking people out of the country. You wouldn't believe how bad these people are," President Trump said.

He's correct, as the numbers of illegal aliens continuing to hide in sanctuary states only continues to rise, with ICE having to go door-to-door to gather intelligence as if they're detectives in the wild west, due to the sanctuary policies preventing them from accessing local law enforcement databases.

In California, Governor Jerry “Moonbeam” Brown has wholly banished local and state police from sharing any information with ICE in regards to illegals, despite the overwhelming crimes being committed by those same fugitives from deportation.

Countless counties and districts in California have now joined Attorney General Jeff Sessions in a lawsuit against the state. It is not one, but two individual suits that will force the overturn of SB 54, a controversial sanctuary law, and to declare the Governor in violation of federal immigration laws.

The once heavily liberal California has become frustrated with the surge of illegals in their state, not only due to high crime but also the increase in taxes to house, feed, provide welfare, and even incarcerate and relocate the illegal aliens in the state.

All Americans who support President Trump desire to both see a border wall built, and to have the illegal alien population deported from the nation.

On the campaign trail, President Trump spoke tough rhetoric, albeit honest about the dangers which illegal aliens pose to the American taxpayers.

"When Mexico sends its people, they're not sending their best," President Trump stated on the campaign trail, in comments that have become legendary. "They're bringing drugs. They're bringing crime. They're rapists. And some, I assume, are good people."

With children being sexually assaulted by illegal aliens, women being raped, some kidnapped, and illegals being predominantly responsible for the flow of cocaine, heroin, and methamphetamine into the United States of America, Trump is accurate in his definition of the dangers posed.

Recently, the Trump Administration announced the end of “catch and release” policies, with Jeff Sessions at the Justice Department demanding that federal agents not only arrest and charge illegal aliens who have been previously deported with felonies but with bringing lawsuits against the heavily Democratic cities and states that refuse to obey federal immigration laws.

The DOJ has committed every resource to try to prevent the flow of illegal immigration into the United States of America, albeit there's only so much that time can allow due to the snail's pace Congress and the federal courts seem to move in responding to the looming threat of invasion from illegals.

As several Soros-backed “caravans” of illegal aliens have headed through Mexico towards America, the Trump Administration alongside the DOJ via AG Jeff Sessions also tightened the screws on the Mexican government to stop them in their tracks, threatening sanctions and penalties if action weren't taken swiftly.

Sessions also immediately ordered the DOJ to bring about charges against those caught entering illegally, in what has now seemed to be a war led by Sessions against would-be illegals coming from Mexico.

As a renegotiation of the North American Free Trade Agreement (NAFTA) seems plausible in the near future, President Trump has more than enough reason to punish Mexico for their inactions or at least use the threat of such penalties to force a response.

One thing is certain, which is that America is now battling an outright invasion against illegals, whereas for eight years the Democratic Party and Obama Administration did absolutely nothing as our borders were flooded by the pending danger of illegals.

No doubt during the second half of President Trump's first term he will begin to have many of his Administration’s arguments heard in federal court, as Congress will likely begin to revisit the border wall and immigration laws after the 2018 midterms.

Numerous new faces to the Republican Party have promised to run on the plight to back the President of the United States of America's agenda and tighten our border security, which is one of the key reasons it will be so important that people turn out to vote in November.

Typically, a sitting President loses control of at least one if not both the House and Senate during midterms, as many of that President's supporters, despite their oftentimes high popularity, simply become comfortable and don't show up to vote.

That usually changes when the President runs for a second term, whereas in 2020 Trump's massive numbers of supporters will no doubt show up to vote with him on the ticket, although he isn't there to give them a reason to vote in 2018.

Currently, Democrats need only 23 seats to flip the House of Representatives, so come November we shall see just how many actually show to vote.

This is a crucial time for America's future, with the booming economy in place, and the Immigration fight heading into the toughest days coming up, so it's important that all people remember to hit the voting booths and vote for candidates who back our President.

Libs are taking the quote out of context. He was directly referring to ms-13. And yes, those are animals. No question about it.

It's long past time that the wall be built. Do it now and get rid of the illegal aliens that are in our country. What the hell is holding it up? Why are they still here? Move them OUT.

Arrest that stinking Soros for crimes and treason against the United States of America and keep that animal locked up for good. Soros and people like him are mentally deranged. All they do is things to ruin our beautiful country and our way of life. I'm sorry to say this, but take him out if need be.

Criminals yes…animals yes. At least many of them. Trump ran and won on his tough immigration stance. We WILL go back to enforcing the law. Period.