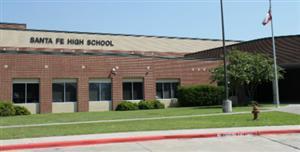 There's breaking news surrounding a high school in the Santa Fe Independent School District in Texas where it appears that an active shooter has opened fire about 40 miles outside of Houston.

The school district has yet to release any details outside of suggesting that law enforcement agencies are scrambling to Santa Fe High School and that the facility is on lockdown as emergency medical responders arrive at the scene of the crime.

The Bureau of Alcohol, Tobacco, and Firearms are also reported to have sent a response team to the site, with school personnel reported to have locked all doors to their classrooms as law enforcement attempt to locate the gunman.

The shooting is reported to have begun between 7:30 and 7:45 AM local time, although it remains unknown as to how many injuries may have occurred as a result.

Rumors are fluctuating on social media that there are wounded students, although there's no current confirmation from law enforcement that anyone, in particular, has been hit by gunfire.

The suspect is alleged to have been taken into custody, although there's still no guarantee confirmation that this report is accurate.

This is a breaking story, we will no doubt provide updates as they are released from police.