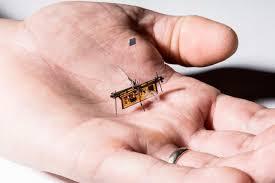 The first "untethered" flying insect has been unveiled. Unlike the RoboBee project, which could fly by flapping its wings but had to be hard-wired to a power source, the RoboFly (like Pinocchio) has got no strings to hold it down. The entirety of the RoboFly is just a bit heavier than a toothpick. RoboFly was designed by a team at University of Washington, one member of the RoboFly team also worked with the Harvard researchers who developed RoboBee. An onboard battery would be too heavy to allow it to fly.

RoboFly is powered by a laser that shines on the photovoltaic cell that powers the flapping of the wings required for flight. Unlike RoboBee, the RoboFly project has an onboard microcontroller to manage the robot's wings. RoboBee's processing is all operated through the tether-linked external controller.

So far RoboFly is only able to take off and land. Attempting to pivot moves its photovoltaic cell out of alignment and it loses power. Next step for the project will involve finding a way to allow the RoboFly to fly without losing power which may involve allowing the laser to track the movement of the artificial insect. Another hope for the future is a later version of the RoboFly being able to harvest its energy from radio frequency signals.

<blockquote>"I'd really like to make one that finds methane leaks," says Fuller. "You could buy a suitcase full of them, open it up, and they would fly around your building looking for plumes of gas coming out of leaky pipes. If these robots can make it easy to find leaks, they will be much more likely to be patched up, which will reduce greenhouse emissions. This is inspired by real flies, which are really good at flying around looking for smelly things. So we think this is a good application for our RoboFly."</blockquote>

The tv program Black Mirror featured an episode involving robotic bees that had taken the place of organic bees. Considering the rate of colony collapse disorder, it's possible that such a solution for pollenation might be the only thing that would sustain human life. In the episode Hated In The Nation from the Black Mirror anthology series, a murderer manages to hack the bees themselves to do their bidding like a robotic version of Willard.

This is miraculous ~ congratulations

just wait.... eventually our gov will add a tiny poison hypodermic needle and they will be able to assassinate anyone, anywhere at will.