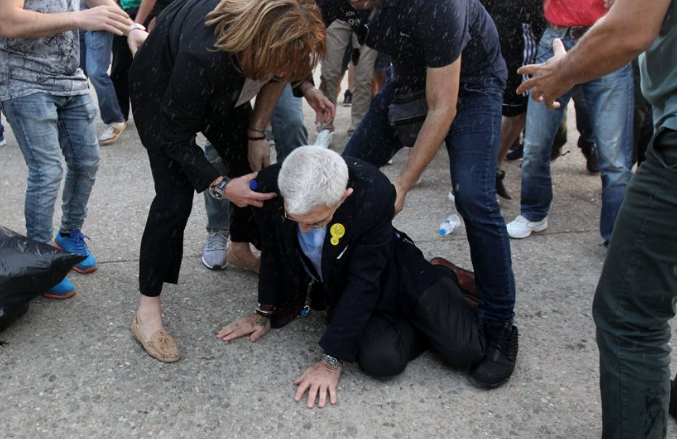 Loyal readers of The Goldwater know that there is a bout of nationalism ongoing in Greece’s northern city of Thessaloniki at the moment as their northern neighbour, officially known as the Former Yugoslav Republic of Macedonia would like to change its name into Macedonia and join the EU, but nationalist and far-right forces in Greece’s second biggest town, Thessaloniki, are very much against allowing this as they claim to be the rightful name-bearers of anything linked to Macedonia, which is how their region is called, and thus anything linked to their forefather Alexander the Great.

Thus, when the nationalists organized a remembrance for the "Pontic Genocide," the killing of ethnic Greeks by the Turks in the Black Sea region during World War I and the subsequent Greek-Turkish War, the anti-nationalist 75-year-old mayor was not very welcome.

However, Mayor Yiannis Boutaris decided to show up anyway thinking that tensions would settle down during the flag-lowering ceremony.

But to his surprise, a large crowd started shouting slogans against him, urging him to leave. In the end, the old man fell down and was kicked in the head and legs.

"They were hitting me everywhere. Kicks, punches, the lot," Boutaris said from a doctor’s office afterwards.

"It was a despicable attack, but I am well."

Footage from the event shows Mayor Boutaris initially simply being heckled and shouted at. However, as the shouting grows and he starts to leave, people throw objects at him and he falls to the ground.