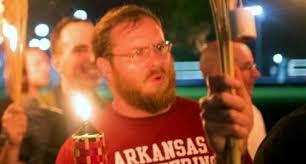 Andrew Dodson, an attendee at the Unite the Right rally in Charlottesville, Virginia has committed suicide reportedly after months of receiving death threats and abuse after being doxed by Jonathan Rosenberg online. What likely made it even more difficult for Dodson was the fact that he was also "outed" as furry, that is a member of a subculture who are into anthropomorphic cosplay. In some but not all cases, the animal related cosplay has a sexual aspect involved. Dodson actually passed away March of 2018, but the story has recently been making the rounds at Twitter, Reddit and other sites and forums. The <a href="http://dogpatch.press/2017/09/01/charlottesville-andrew-dodson/">furry fandom site dogpatch.press</a> updated their short blurb on Dodson the 20th of March this year, just over a week after Dodson killed himself.

Dodson was apparently not the only "alt-furry" in fact, not even the only white nationalist furry to attend the Charlottesville rally. Andrew even attempted to apologize and make amends to an old ex-girlfriend through an open letter that was published at the furry fandom site Dogpatch. http://archive.is/mxIZJ

One of his more recent Twitter handles was Dogofwar88 (the "88" likely a reference to code for "Heil Hitler" common in some Neo-Nazi communities). <a href="http://archive.is/vxi4t#selection-4921.148-4921.239">An ex-roommate on Twitter responded</a> to the events back in March saying that he would not have allowed him to room with him had he known about his attendance of the UTR rally and his white nationalist beliefs. However, LeoDragonArts after fully disavowing is personal politics had a few decent things to say about Anthony himself:

<quote>AS A PERSON, he was kind hearted, and very knowledgeable, and left a good impression on me.</quote>

Dodson was just one of many who after being doxed lost his job and was faced with massive online abuse after it became public knowledge he was involved in UTR. Dodson was <a href="https://arktimes.com/arkansas/arkansas-linked-charlottesville-marcher-identified/Content?oid=8781493">outed by Jacob Rosenberg, then of the Arkansas Times</a>. Dodson attempted to apologize for his behavior through the Arkansas Times as well, but apparently his attempt at redemption was not accepted by the public at large.

<blockquote> "There's a couple of guys in Fayetteville that have been misidentified as me. … It's not those guys, it's not them; it's me," Dodson said. "I'm so sorry, I would never want to hurt you and your family. If they want my T-shirt back, I'll send it to them." Dodson did not know personally the professor who was misidentified, who worked in a different branch of engineering than that studied by Dodson, but he did apologize to those with whom he studied for two years. He did not graduate from the university.

"I learned so much from these [engineering] guys," he said. "It breaks my heart that they're going to think I'm a Nazi, or a KKK, or a white supremacist. "I did not put on that University of Arkansas shirt in order to represent them. It's really like one of my favorite shirts and I was wearing it when I got on the plane," Dodson said. "I just didn't put two and two together. It was dumb." </blockquote>

Dodson was convinced that the massive failure of the Charlottesville rally was due to the police standing down and allowing violence and the Antifa and Black Lives Matters supporters who he believes were likely bussed in the next day along with the folks with Nazi and KKK regalia.

And nothing of value was lost.