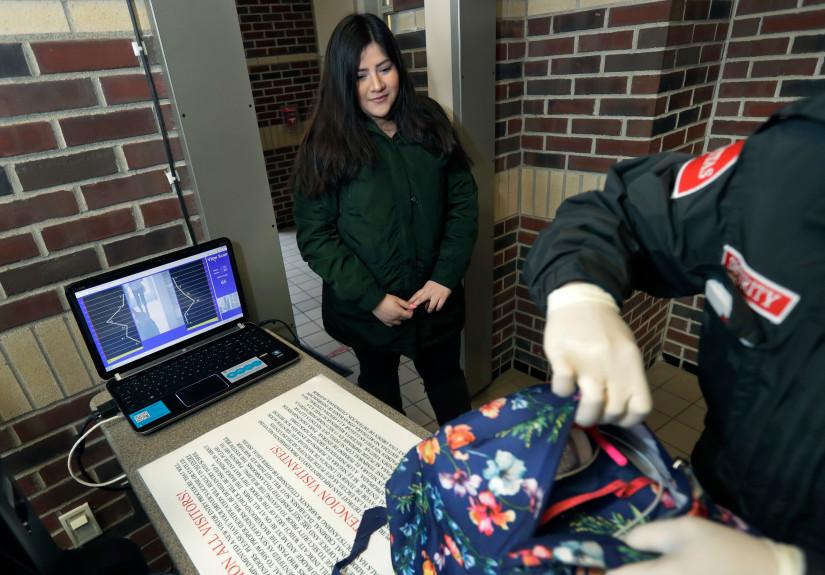 Each time there is a mass shooting, the left renews their push for gun control and places the blame at the feet of law-abiding gun owning citizens. But one student named Alondra Alvarez feels safe and secure when she walks in her school thanks to security and a bank of closely monitored metal detectors. Alvarez drives to school instead of walking even though she lives only five minutes away from her Detroit school because of her mother's fear for her safety.

But when the 18-year-old enters her school Western International, she says she almost immediately feels more secure once she passes through the metal detectors. "My mom has never been comfortable with me walking to school. My mom is really scared of street thugs," Alvarez said. Schools around the U.S. are looking for ways to impose tougher security measures after the recent rash of school shootings such as the one in Parkland, Florida that left 17 dead. This weekend, 10 were killed at Santa Fe High School in Texas.

Those schools looking for ways to improve security don't have any farther to look than urban districts like Detroit, Chicago, Los Angeles and New York that installed metal detectors and other security measures in the 1980's and 1990's to combat rising gang violence. Security experts say that these security measures have drastically reduced these urban schools' likelihood of mass shootings which have mostly occurred in suburban and rural school districts.

Related coverage: <a href="https://thegoldwater.com/news/19318-Parkland-Florida-Meet-The-Hero-Cops-Who-Ran-Into-The-School-Immediately">Parkland, Florida - Meet The 'Hero Cops' Who Ran Into The School Immediately</a>

Philip Smith, president of the National African American Gun Association said, "I think urban schools are eons ahead. They’ve been dealing with violence a lot longer than suburban schools." Detroit was one of the first districts in the country to install walk-through metal detectors in high schools and middle schools. Some New York schools also have them in some buildings and schools in states like Washington also implement armed resource officers and strict metal detector measures.

Nikolai Vitti is a superintendent of the 50,000 student Detroit Public Schools Community District and he said such security measures "are designed to identify and hopefully deter anybody from bringing a weapon to school, but metal detectors alone portray an illusion of being safe. "Our schools need to be safer than they are," Vitti said. "As a nation, we need to fully fund and make sure all districts can adequately staff school resource officers and also offer mental health and first-aid training to all educators."

What has always worked is, ID the Assets and Threats, Establish safeguards for both Physical and Electronic needed to properly and safely Secure and Protect the Assets.

The Process is no different for students & school.

Because sending a hostile problematic student home and verbally telling him to stay off school grounds. Only to have him/her return to a :

School is plain stupid and that is what Liberals School systems do time and time again.

The source of the problem is NOT being addressed.

It is the Person, NOT the weapon of choice.

Because No Gun, knife or can of Gas walked down any school hallway without a Crazy or Unstable Person carrying it.

Wow, this is brand new!