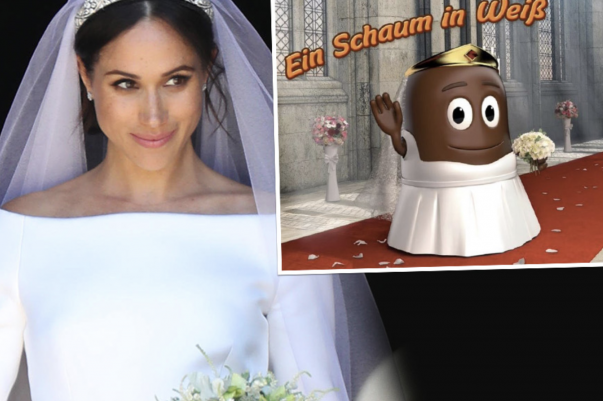 Two days after the German national broadcaster ZDF was criticized on social media over it’s somewhat ‘racist’ reporting of the Meghan Markle and Prince Harry royal wedding of this weekend (see our related coverage), another company got into hot water as well when it thought of making a quick buck over the event.

Knowing full well that women tend to snack whilst watching TV; German company Super Dickmann's, a dessert maker is mostly known for its marshmallows covered in chocolate, shared the image of a smiling "Schokokuss" ("chocolate kiss") bride portraying Meghan Markle in a cathedral in a Facebook post in order to sell some more in the aftermath of the wedding.

The image includes the words, "a foam in white," which refers to the Schokokuss's creamy interior and rhymes with the phrase, "a dream in white."

The company added: "What are you looking at? Wouldn't you also want to be Meghan today?"

Dickmann's spokesman, Mr. Bernd Roessler afterward apologized as the image quickly went viral and admitted that the post, which has by now been deleted was both "stupid and embarrassing"

The company explained afterward: "the world of Super Dickmann's is varied and diverse and far removed from racist ideas."

The Schokokuss's association with racism is nothing new. In The Netherlands, Belgium, and Germany, older generations refer to the age-old snack as "Negerkuss" ("Negro kiss").

How can such a sweet little, chocolate thing be deemed racist? Silly!