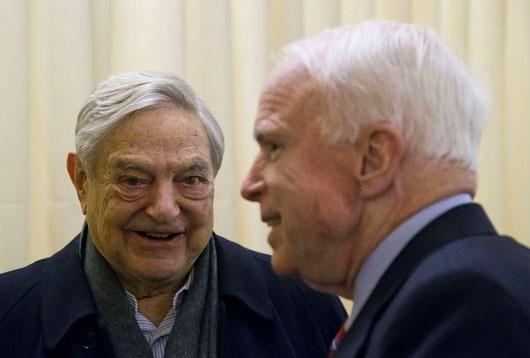 The “great” (sarcasm intended) Senator John McCain (R-AZ) has personally penned a message to Trump supporters who are furious over his hatred for Donald Trump - in which he passed along a fraudulent Fusion GPS Dossier to the FBI - and that message is: “Go to hell.”

It's amazing that Senator McCain can claim he's ill and unable to appear for his taxpayer-financed career in Congress, but simultaneously send out tweets daily, and also write and publish a book which attacks both President Trump and the American people.

McCain confesses in the new book that the information from Fusion GPS, funded by the Hillary Clinton for President campaign, was full of “unproven accusations,” yet admits, proudly, that he passed to the Federal Bureau of Investigation out of the pure hatred for Trump.

Yes, John McCain participated in the effort to takedown then-Candidate Donald Trump, and he isn't ashamed of it.

He even writes that the information from Christopher Steele was “mostly raw, unverified intelligence,” but goes on to he passed along that same information having “no idea if any of it were true.”

What a class act, is the legendary “wetstart” pilot, the one and only “Hanoi John,” the historic “songbird,” Senator John McCain.

I'm not sure that the Trump Administration is appreciative of the obstruction from John McCain, who many would consider as the “leader of the RINOs” (Republican in name only), where John McCain has done everything within his power to undermine the 45th President of the United States of America at every possible opportunity he has.

I am, however, certain that the Trump Administration is grateful that this man is the last of a dying group of powerful people in DC within the Republican Party who votes towards the favor of globalist policies, who never put America first, and that once John McCain is out of this world, we can turn a new chapter for the sake of this nation.

Who can forget the history that John McCain will forever be remembered by, right? Such as the 1969 “Tokyo Rose” broadcast that will forever remind the American people how McCain, a traitor, was able to perpetuate one of the longest con-jobs in American history.

John McCain is not a hero. No, John McCain is a traitor. John McCain is oftentimes hailed by the left as being some type of “hero,” based solely on his obstruction of President Trump. However, they won't tell their own base that McCain is an old<a href="https://thegoldwater.com/news/6834-Yes-John-McCain-is-a-Traitor-and-Yes-his-Great-Great-Grandfather-is-tied-to-the-Ku-Klux-Klan"> racist who's great-great grandfather served under the first Grand Wizard of the Ku Klux Klan</a>. They won't tell you that many of the men who served alongside McCain suggest that he had been granted a different type of treatment by his alleged “captors” in Vietnam, or that he sang like a songbird during that stay and even broadcast a message on behalf of the Communist Party against America.

McCain is on film using profanity against female reporters displaying his outdated sexism, and there are several accounts from Asians of him spouting bigotry against them, even using derogatory and racial terminology to describe them.

It's been almost a year since he's shown his face to vote even once in Washington, DC, all while receiving a taxpayer-funded salary to represent the good people of Arizona as their Senator. He's a disgrace, and he should resign.

Instead, he sits around during his day and finds ways to attack the President, who in less than two years has done more for America than McCain has in his entire life.

One could even critique the fact that for decades John McCain sat on the Armed Services Committee, and to this day there are still roughly 40,000 homeless Veterans in our nation sleeping on the streets.

More concerning would be the fact that for years it was considered “off-limits” to criticize John McCain based solely upon his military service, an atrocity in and of itself.

While we automatically give thanks to the men and women who serve bravely in our Armed Forces and stand tall to honor them; then-Candidate Donald Trump changed that perception of ignorance of one's actions based upon their service alone during the 2016 election for President, where he repeatedly blasted John McCain on the campaign trail.

One could go a step further and say that because of then-Candidate Donald Trump remaining true to the people and defying political correctness with his honesty, that this is what first caused the spat between McCain and Trump that's evolved into an unmentioned hatred behind closed doors.

McCain holds contempt for President Trump for exposing him for what he is, when had Trump not ran for office it would likely still be considered taboo to critique John McCain.

Let's just be honest here. Donald Trump is blunt, twenty-four hours a day, seven days a week. It's partially why we elected him.

John McCain is a nasty, vindictive, and spiteful man who can't seem to get over the fact that he's not untouchable in terms of criticism and that he lost his bids for the Presidency.

The truth is, there are numerous stories about John McCain including from some who served with him, who suggested that his broadcast to the world, where he allegedly “gave in” to his torturers cost numerous Americans to lose their lives in Vietnam as a result of giving the enemy American positions.

McCain’s father, John Jr., and grandfather, John Sr., were both full Admirals that served honorably and climbed rank to achieve their positions.

In fact the Naval Destroyer the USS John S. McCain is actually named after both of them for their service.

John McCain Jr., from 1968 to 1972, was the Commander-in-Chief of U.S. Pacific Command, and this was during the same time that his own son, John McCain, was held captive in Hanoi.

During that time, Admiral McCain was not only in charge of every US force in the Pacific region, including those fighting in Vietnam, but many have long-since that his son John McCain was given special treatment as a result.

Quite frankly, the pictures of other POWs had been appearing to look as if they've been starved, ribcages exposed, through malnourishment or even having been beaten in horrifying atrocities, will bring a tear to your eyes.

All Americans should listen to the other men who served in Vietnam, not the ones like McCain who had privileged rights because of who his family members were.

In my eyes, those men put it all on the line for America, many of whom were forced to serve, and still didn't give in to the demands of their torturers. Many even died during the abuse.

Even worse is how Vietnam Veterans were treated upon their return. I absolutely understand that this issue involving McCain and Vietnam is an offensive topic to some, but to avoid generalization I'm reporting what's already alleged about the events.

May God of mercy on those brave men's souls who didn't survive Vietnam, or those who returned and have passed away since. They served their nation with honor and dignity, and they've forever a place in our hearts as heroes.

McCain is not one of those heroes.

There's nothing honorable about this man, and his legacy is nothing more than hatred for our country and the people of this nation who support our President and traditional values.

John McCain is the “old guard,” who receives payoffs from big industry to legislate against the American people and pockets the proceeds to fatten his already enlarged wallet.

This era of corruption in DC is coming to an end, as we've seen with the countless resignations and refusals to seek reelection, with Americans turning towards need and fresh faces in the GOP in hopes of “draining the swamp” that President Trump warned his supporters about during the campaign.

DC is being reformed, one politician at a time, and I assure you that the American people will not miss John McCain when he's gone.

We're tired of political correctness, and we're not going to pretend to be sympathetic for John McCain, when he despises America, despises Donald Trump as our President, and makes no doubts as to whether he despises Trump's supporters or not.