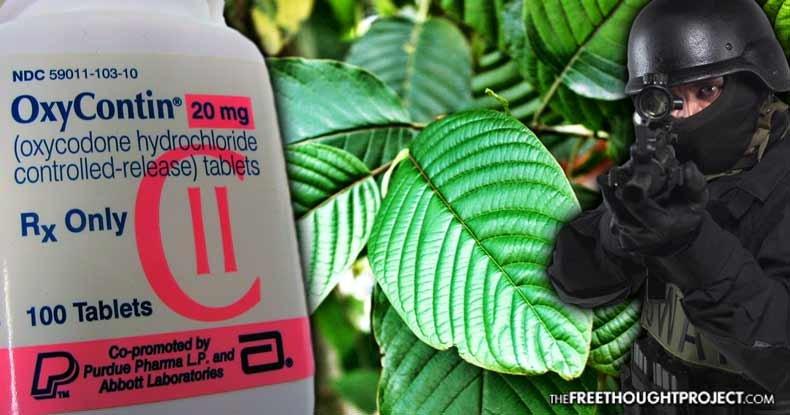 The FDA has launched the latest round of attacks against the herbal supplement kratom Going into year three of this, I don't see them giving in easy, but same with the kratom community, plus we have mounds of research, dozens of scientists and medical professionals who also support kratom. I'm still hopeful. Seems DC is becoming more educated on the matter. Latest trend I've noticed is more "citywide" bans though since at state level it was beaten in most cases. The most recent volley from the FDA involves warning letters sent to a handful of kratom marketers and distributors "for illegally selling unapproved kratom-containing drug products with unproven claims about their ability to help in the treatment of opioid addiction and withdrawal."

The FDA takes offense at claims regarding treating pain and other medical conditions (lowering blood pressure is mentioned) or treating cancer, etc. According to recent studies, some researchers suggest that kratom is anti-cancer and chemo-preventative, as far as lowering blood pressure, there are multiple studies related to that. In fact, the specific constituent in kratom that is responsible for the lowering of blood pressure has been pinpointed. Alas, such is the case with the FDA. Oranges may improve your immune system, but the minute you say "oranges may cause you to have fewer colds" you are crossing over the line into illegal marketing as per the FDA. Anything that "treats, diagnoses or prevents a disease" is a drug legally according to the FDA.

<blockquote>“Despite our warnings that no kratom product is safe, we continue to find companies selling kratom and doing so with deceptive medical claims for which there’s no reliable scientific proof to support their use,” said FDA Commissioner Scott Gottlieb, M.D. “As we work to combat the opioid epidemic, we cannot allow unscrupulous vendors to take advantage of consumers by selling products with unsubstantiated claims that they can treat opioid addiction. Far from treating addiction, we’ve determined that kratom is an opioid analogue that may actually contribute to the opioid epidemic and puts patients at risk of serious side effects. If people believe that the active ingredients in kratom have drug-like effects that can treat pain or addiction, then the FDA is open to reviewing that data under our new drug approval process. In the meantime, I promised earlier this year that the FDA would step up our actions against unapproved and unsafe products that are being deceptively marketed for the treatment of opioid addiction and withdrawal symptoms. At the same time, we also promised to make the approval process more efficient for novel, safe and effective medical treatments aimed at the treatment of addiction; and to help more people suffering from addiction get access to approved therapies. In fulfilling these commitments, we’ll continue to take enforcement actions against unscrupulous products to protect the public health.”</blockquote>

I personally find it very ironic that Scott Gottlieb, the man who convinced the FDA to allow more fentanyl to be made and marketed to a larger number of patients, is railing on about things that could or would make the opioid epidemic worse. "The FDA continues to warn consumers not to use Mitragyna speciosa, commonly known as kratom, a plant which grows naturally in Thailand, Malaysia, Indonesia and Papua New Guinea. The FDA is concerned that kratom, which affects the same opioid brain receptors as morphine, appears to have properties that expose users to the risks of addiction, abuse and dependence." FDA is fine, however with Desoxyn being marketed to 6-year-olds (pharmaceutical grade methamphetamine) or preteens being prescribed oxycontin. As far as "opioid binding" they fail to mention that caffeine and cheese and other dairy products also exert some mild opioid receptor binding. So does exercise. Ban milkshakes, cheeseburgers, caffeine, working out and anything else that "exerts opiate receptor binding?"

No doubt the vendors of kratom should be especially careful with how they market this plant. There is plenty of evidence that eating fruits supports immune system health and that you're likely to get sick less often if you eat them regularly. However, the moment you say "Apples keep away the cold." You've effectively made apples a "drug" by US law thanks to screwy FDA regulations regarding "curing, diagnosing or treating an illness." The FDA guidelines for marketing are incredibly strict and several items skirt or cross the line as is. That said, appealing to "junk science" as Johns Hopkins University's Dr. Jack Henningfield (former head of the National Institute of Drug Abuse) puts it to create a kratom scare isn't helping anyone. Except perhaps for those pharmaceutical manufacturers (and their protectors like Dr. Gottlieb) who have made billions creating the situation in the first place.